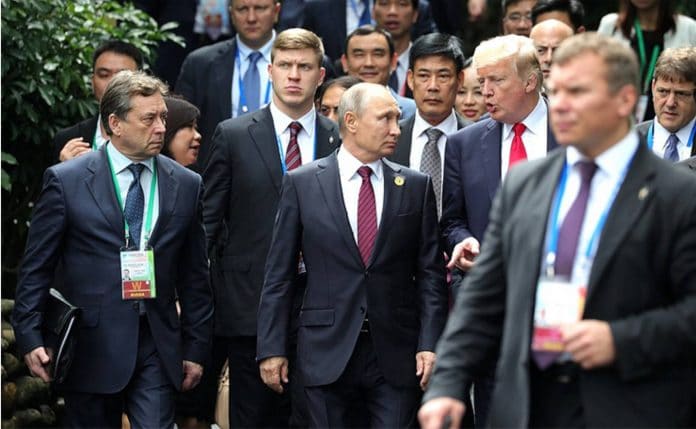 [ Editor’s note:  Trump will meet Putin in a more solid position than otherwise due to the resignation of SC Justice Kennedy.  Kennedy, a closet liberal in conservative guise, was considered untrustworthy by Trump’s handlers and forced to resign based on his sexual history.

Kennedy has an odd history in the court, having backed gay marriage and abortion rights but led the move to hand America over to the banking cabal under Citizens United v. US.  This was “his baby” and a disaster for America.

Black Cube dropped a bomb on Kennedy, forcing his resignation or arrest/impeachment in order to give Trump the needed votes on the court to insulate himself from impeachment.However, we go to Syria and the Middle East for today’s story, published in Russia… Gordon Duff ]

Moscow: Israeli planes have been bombing Syria and, less publicly, the Houthi regions of Yemen, using “roundabout” routes to evade air defenses. This, in itself, is not controversial. However, what is controversial is reports that Israel has been operating out of bases inside both Saudi Arabia and Jordan.

Sources not only confirm these reports but military analysis of Israel’s missions, as they announce them publicly, prove use of particularly Saudi bases is mandatory.

Questions then arise regarding the degree of inter-cooperation between these nations and the Gulf States, against Syria, against Yemen, against certainly Iran and to a lesser known extent, in support of ISIS operations across the region.

Of course, none of this would be possible without logistical support, mission planning and AWAC services supplied by the United States. Thus, we are confronted with a leading question; how will Russian policy in the region address this threat to their own interests?

Will Vladimir Putin come out of the Helsinki summit with some idea of who Trump really is, and moreover, who is really running the United States? Is it the rich, the military-industrial complex or a mysterious cabal of dark figures, cults, councils and secret societies warned of by John Kennedy back in 1963?

Is anyone really in charge in America at all? Does America exist as a nation with policies and interests or has the current flurry of direction changes and chaos signaled a nation in free fall?

America is playing a double game in Syria. America is standing aside while Assad forces are retaking the South, a seeming agreement to keep Iranian fighters out that that portion of the wider conflict, despite denials, is inexorably in play.

American policy is clearly not its own, leaving America as a minor player whose government was bought and paid for by Saudi cash and Israeli lobbying efforts, or so many analysts are now coming to realize.

The Mueller Probe and the Politics of ISIS

Even the Mueller investigation is now re-centering on the Saudi’s and Gulf States and their ties to Americans names like Erik Prince and Dick Devos, names that have long been “fronts” for Israel’s power in America.

Yet America is openly soft peddling on the war in ISIS, minimally doing nothing, with ISIS strength East of the Euphrates River consistent under US inaction. Syria and Russia claim America is aiding ISIS, arming and training them, safeguarding their commanders and even supplying them with intelligence and command support.

The war in Yemen has been ongoing for years. In addition to the Gulf States and even mercenaries from as far away as Latin America, the US and Israel have been directly involved. Attacks are planned and supported by the US, the air attacks, the naval blockade, using American assets in the region and stockpiles of American weapons and fuel.

Israel has flown missions against Yemen for years. On May 11, 2015, two Saudi “painted” American built F16 fighters were shot down over Yemen, as examination of wreckage found them to be of a variety and type only sold to Israel and not among Saudi inventory.

“Photo analysis of the shot down F-16 in Yemen show that they are the early model; block A/B F-16 ground attack configuration version (it has the small or what is called the short tail) with Royal Saudi Air Force markings being newly painted on the air frame. All of the so-called Arab coalition aircraft are block C/D not A/B.

So, this is probably one of the 50 surplus US F-16 A models given to Israel during the Clinton administration or it is a recently surplus ex-NATO aircraft either from Italy or Portugal. The only other option is that they were directly supplied from the US covertly.

It was carrying the 300-gal center line long range bolt on conformal drop tank with no air to air refueling capability or ECM equipment. Therefore, it was shot down. Too slow and no countermeasures. It was also using the older APG-66 radar. Riyadh or UAE to Yemen is only 600 miles.

However, Israel to Yemen is 1200 miles. An F-16 with 3 drop tanks, 4x 1000 lb. bombs and 2 sidewinder missiles for self-defense is do-able from Israel. The very same distance and mission configuration as needed to hit Iran.”

What this proves and what it proved with Yemen in 2015 it also proves for Syria and Israel’s air assaults there. Israeli attacks on Syria, which show routes over Saudi and even Turkish airspace, attacks that come in from the East over Iraq, require air to air refueling which America could only do or something far more sinister.

Israel is operating out of bases in Jordan and Saudi Arabia, aircraft, drones, and has been for years.

Where planes were painted in Saudi markings, something Israel has always done, they openly use their own markings, planes and crews living in Saudi Arabia, based there to attack Syria and quite probably Iran as well.

A summit meeting between Vladimir Putin and Donald Trump is scheduled for July 16, 2018. Trump will arrive after golfing in Scotland for sure but he may well sink NATO before sitting down with the Russian prime minister.

Trump’s economic war on China has now spread to the EU, with bans on dozens, if not hundreds, of American products, evidence of European protectionism and the machinations of the World Trade Organization, now the subject of Trump’s endless ire.

The hope for many, an end to American sanctions on Russia, may be in the offing as the US moves further from its NATO partners. One must remember that trade relationships are the heart of NATO.

On a darker note, Pentagon militarists would replace Germany with Poland as America’s primary NATO partner, moving major bases closer to Russia, posturing for the long-planned dissolution of the Russian state Vladimir Putin may well have saved from full dismemberment and “puppetization.”

The questions many ask are these:

The paradigm shift in how inter-relationships in the Middle East are now perceived, with Saudi Arabia and Israel openly cooperating at many levels, well should impact all nations. The issues are several, certainly terrorism and security, but also access to needed and affordable supplies of oil and gas.

Certainly, to an extent, the manufactured instability that has pushed oil to near record levels has made America’s insistence on blocking Iranian oil sales as well as the Nordstream gas project more than controversial.

The key to it all may well be a few Israeli air attacks on remote regions of Syria requiring non-existent capabilities, attacks Israel loves to brag about even when their darker alliances may well be exposed.