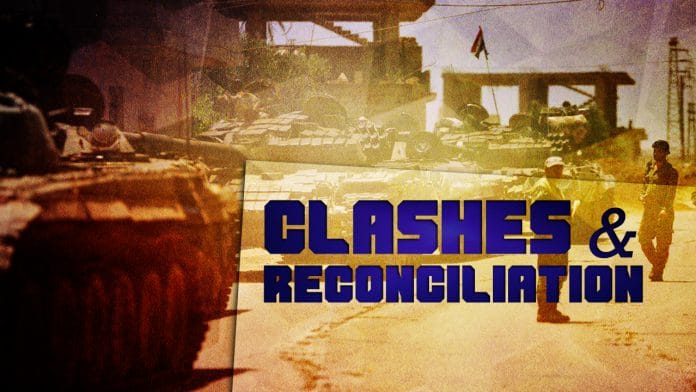 The Syrian Arab Army (SAA), the Tiger Forces and their allies are about to achieve a stunning and rapid victory in their battle against Hayat Tahrir al-Sham and their allies in southern Syria.

Over the past few days, government forces have liberated over 15 settlements in the eastern and western countryside of Daraa and forces some groups of militants to accept a surrender agreements.

Militants in the town of Bosra al-Sham already started surrendering weapons. At the same time, the so-called moderate opposition in the town of Tafas and have pledged allegiance to the ISIS-linked Khalid al-Walid Army.

The Israeli Defense Forces (IDF) have deployed additional armoured and artillery forces, including battle tanks, in the occupied Golan Heights, near the contact line with Syria.

Israel claimed the additional forces were deployed solely to “respond” to potential incidents and that “the IDF will continue to insist on the principle of non-involvement in what is happening in Syria”.

Meanwhile in reality, Israeli forces have repeatedly targeted forces of the Damascus government in southern and central Syria describing these strikes as a defensive measure.

It’s interesting to note that many of these strikes took place during important battles between the SAA and terrorist groups.

Syrian and local sources say that the IDF is preparing for carrying out more strikes amid the ongoing SAA anti-terrorist operation in the provinces of Daraa and Quneitra. While such strikes cause a new round of the Syrian-Israeli tensions, they will not likely influence in any way the strategic situation in these provinces because militants’ defense has already collapsed.

If Israeli forces continue striking SAA troops attacking the Khalid al-Walid Army near the occupied Golan Heights, the international audience will easily find out that Israel is encouraging ISIS in the area and using the terrorist group to create a buffer zone there.