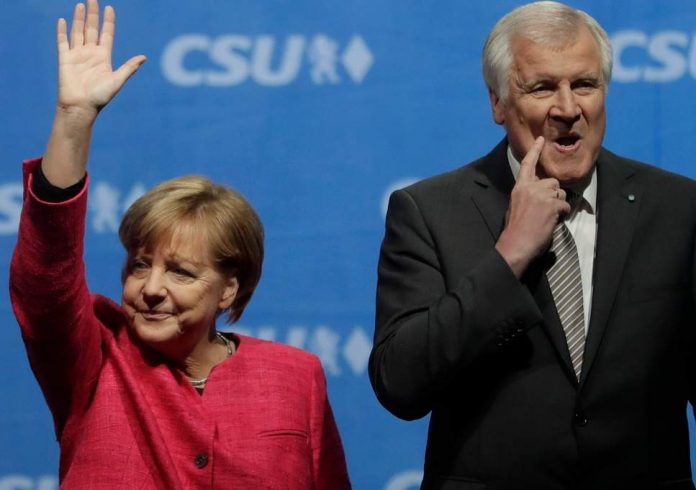 To borrow a phrase, when Germany catches a cold, Europe gets pneumonia, and right now the political situation in Berlin is looking distinctly peaky.

If Angela Merkel’s rickety government does collapse – whether or not it’s in the orderly fashion ordained by the federal republic’s constitution – everyone in Europe should be very afraid of what life after “Mutti” would be like.

You could argue she’s had it coming, ever since her brave and principled decision to allow around a million asylum seekers, including from the war in Syria, into Germany. It was no matter that Germany was weak, divided, and with a succession of wobbly governments based on a kaleidoscope of shifting allegiances, as well as a growing parliamentary presence for parties on the extreme right… (I hope I am not being too alarmist).

We should remember too that Germany remains the continent’s only economic and industrial power of truly global stature. It is a great force for good, but perhaps we have taken its benign stability for granted for too long.

If Merkel does go, and out of some bitter arguments comes a stronger AFD, a noxiously nationalistic party, three things will inevitably flow.

First, an unwillingness to honour what she has been able to achieve in the way of a European “deal” on migration. That, in effect, is what a fresh election would be a referendum on.

Second, a refusal, frankly backed by the financial impossibility, to bail out Italy. That country’s banks and the state itself are virtually insolvent. Now, in a country itself seized by the far right, the Italians are threatening to print their own version of the euro – mini Italian treasury bonds with a face value as low as 10 euros that can be used as legal tender and to fund bank accounts – a clear dodge to evade European central bank disciplines.

Italy is the third largest economy in the Eurozone, to prop it up is beyond the means even of the Germans, and even if they wanted to – which they don’t. Sooner or later, Italy will leave the euro because Italy is too big to save (unlike little Greece), and because Italy has a government, and is a country, full of people who actually wish that to happen. It could bring the entire single currency down with it.

Third, there will be a generally more sceptical German attitude to further European integration along the lines advocated by President Macron of France, and, thus, a weakening of the spine of the European Union, the Paris-Berlin axis. The European Union, probably with the calculating connivance of the French (Macron too needs to watch his political flank), the ready assistance of the east Europeans, Dutch, Austrians and Scandinavians – and to the ecstatic delight of the Italians – would be moving towards a looser, less cohesive force. If and when that happens, freedom of movement will be ditched, and the Schengen Agreement on free borders would see fundamental reform. Brexit would be a sideshow compared to a Eurosceptic Germany.

The irony would be that a reform of the EU to suit British tastes would be arriving at just the moment the UK would be heading out of the door.

It is sometimes reported that the threat by the leader of the Christian Social Union (CSU) party and interior minister Horst Seehofer to resign from the Merkel government is a routine bit of argy-bargy between coalition partners, like the rows Nick Clegg and David Cameron used to have very occasionally. This crisis is, however, much more than that, and more important and potentially seismic than just the fall of the Merkel government and the end of the chancellor’s long political career, momentous as that would be.

For the CSU is the “sister” party of Merkel’s Christian Democratic Union (CDU), which in fact understates the sibling bond. They are more like twins, if not conjoined twins. The CSU, though technically separate, has, for most of the period of its existence since the Second World War, acted as a sort of regional variant of the CDU, operating in Bavaria, whereas the CDU operates elsewhere in Germany. They have always worked in close concert at the federal level.

The CSU hasn’t managed to win the federal chancellorship, but it has put candidates up on behalf of the CDU-CSU “union”, and always provided political heavyweights to CDU-CSU administrations. The two wings of German Christian Democracy have usually agreed, broadly, on the notion of a “social market economy”, though the CSU is more culturally “Catholic” and socially conservative (it has been stressing this lately), and represents what is one of the wealthiest regions of Germany, or the world for that matter.

It is also true that Bavaria has been on the “front line” during the migration crisis and the flow of people from the south. The rich Bavarians – whose area is home to BMW, Audi, Infineon and Puma, as well as some fine breweries – resent paying vast sums to rescue places like Greece. Bavarian regional interests are diverging more markedly from federal German ones. Hence the schism.

This is all part of a fracturing of Germany’s party system, with Greens, Free Democrats or FDP (nowadays a roughly Thatcherite group and socially liberal) and former Communists (“the Left”) finding representation in a Bundestag once monopolised by the CDU/CSU and the Social Democrats, with the FDP providing a handy and usually cooperative coalition partner for one or the other. The German electoral system was not designed for such a crowded field as today’s, and it is showing the strain of the resulting paralysis. Germany is in no position to “lead” Europe, and has little desire to. That is bad.

What is happening in Germany has been happening across Europe for years, masked by the victory of Emmanuel Macron in France and Angela Merkel hanging on to power in Germany. The far right, or populist right, or neo-Nazi right, or conservative right, or fruitcake right, in varying national flavours, are in government, either alone or in coalition, in Slovenia (the latest), Austria, Italy, Hungary, Poland, the Czech Republic and Bulgaria. They are too close for comfort to the levers of power in the Netherlands, Denmark, Finland and France; they are slowly pushing up their support in Germany and Sweden. Only in Slovakia do they seem to have been beaten back. In Greece and Spain, it is the populist far-left who have taken the best advantage of the atmosphere of crisis.

All across Europe, then, social democracy has been dying a slow and pitiful death. Now Christian democracy – what the British would recognise as moderate conservatism – is suffering the same fate.

Too many conservatives see their easiest path to power in forming accommodations and coalitions with the far right, rather than centrist groups of “grand coalitions” with social democrats. It is a frightening trend, and one in which Brexit, the Conservative-DUP deal and the rise of Corbynism are the British counterparts to the wider story.

With America disengaging from European defence, an expansionist and aggressive Russia, trade wars and a floundering European “project” – and most of all a politically powerless and introverted Germany – the 2020s promise to be stormy years for our continent. The clouds are gathering, if we dare to look.

A totally bizarre interview with Lindsey Graham on Trump and party...