If you support terrorism, can you really tell the entire world that you are fighting terrorism? Isn’t that a blatant contradiction? And what are the consequences of aiding and abetting terrorist cells and activities? Let us cite one of the legal documents of the United States:

“Title 18 United States Codes provides: ‘Whoever willfully causes an act to be done which if directly performed by him…would be an offense against the United States, is punishable as a principal.”[1]

It can’t be any plainer: Covert activities with any terrorist organization should put you behind bars for the rest of your natural life. The problem is that US officials have been doing exactly that for the better part of sixty years.

One US official who has found it congenial to ally with terrorist cells is Rudy Giuliani. Giuliani is Donald Trump’s personal lawyer. He has recently gone to Paris to speak at an event which was largely sponsored by a terrorist organization known as the Mujahedin-e-Khalq (or MeK).

The interesting thing is that the MEK “was once listed as a terrorist organisation in the US and Europe and is still widely viewed as a Marxist-Islamist cult built around the personality of its leader, Maryam Rajavi.”[2]

The Republican Party itself has a history of allying with MEK. In fact, George W. Bush trained this terrorist organization in Nevada![3] As noted journalist Seymour M. Mersh put it in 2012,

“It was here [in Nevada] that the Joint Special Operations Command (JSOC) conducted training, beginning in 2005, for members of the Mujahideen-e-Khalq, a dissident Iranian opposition group known in the West as the M.E.K. . . .

“The M.E.K.’s ties with Western intelligence deepened after the fall of the Iraqi regime in 2003, and JSOC began operating inside Iran in an effort to substantiate the Bush Administration’s fears that Iran was building the bomb at one or more secret underground locations.

“Funds were covertly passed to a number of dissident organizations, for intelligence collection and, ultimately, for anti-regime terrorist activities. Directly, or indirectly, the M.E.K. ended up with resources like arms and intelligence. Some American-supported covert operations continue in Iran today, according to past and present intelligence officials and military consultants.

“Despite the growing ties, and a much-intensified lobbying effort organized by its advocates, M.E.K. has remained on the State Department’s list of foreign terrorist organizations – which meant that secrecy was essential in the Nevada training.

“We did train them here, and washed them through the Energy Department because the D.O.E. owns all this land in southern Nevada,’ a former senior American intelligence official told me.

“We were deploying them over long distances in the desert and mountains, and building their capacity in communications — coördinating commo is a big deal.

Well, US officials were in concert with the Israeli regime in order to take down the Iranian government. The same violent, terrorist cell was also trained by the Mossad and ended up killing Iranian scientists.[4] So Was Bush really a puppet following the guiding principles of the Zionist ideology in Israel? Well, let us listen to Hersh once again:

“The former senior intelligence official I spoke with seconded the NBC report that the Israelis were working with the M.E.K., adding that the operations benefitted from American intelligence. He said that the targets were not ‘Einsteins.’

“The goal is to affect Iranian psychology and morale,’ he said, and to ‘demoralize the whole system — nuclear delivery vehicles, nuclear enrichment facilities, power plants.’

“Attacks have also been carried out on pipelines. He added that the operations are ‘primarily being done by M.E.K. through liaison with the Israelis, but the United States is now providing the intelligence.’

“An adviser to the special-operations community told me that the links between the United States and M.E.K. activities inside Iran had been long-standing. ‘Everything being done inside Iran now is being done with surrogates,’ he said.”[5]

Iranian intellectuals such as Professor Muhammad Sahimi wrote against the United States removing the MEK as a terrorist organization,[6] and the U.S. knew very well that the MEK had committed terrorist acts over the years. Yet once again the Zionist regime had the upper hand. 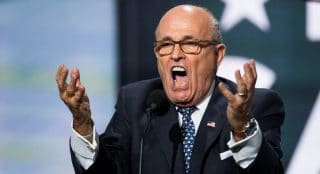 So it is really interesting to hear again that Rudy Giuliani is working with the MEK in order to destabilizing Iran. He said at the meeting in Paris:

“We are now realistically being able to see an end to the regime in Iran,” Giuliani told a crowd of about 4,000, many of them refugees and young eastern Europeans who had been bussed in to attend the rally in return for a weekend trip to Paris.

“The mullahs must go, the ayatollah must go, and they must be replaced by a democratic government which Madam Rajavi represents,” Giuliani said. “Freedom is right around the corner … Next year I want to have this convention in Tehran!”[7]

According to the Guardian, Giuliani even said that “the current wave of protests in Iran was being orchestrated from outside.” Giuliani admitted: “Those protests are not happening spontaneously. They are happening because of many of our people in Albania [which hosts an MeK compound] and many of our people here and throughout out the world.”[8]

So the recent sanction against Iran has been orchestrated by the war machine and Zionist puppets like Trump and Giuliani. But the Iranian government has a dire message for those people. Iranian President Hassan Rouhani has recently declared:

“The Americans say they want to reduce Iranian oil exports to zero. They have talked without thinking carefully. It shows they have not thought about its consequences. Iran will survive this round of US sanctions as it has survived before. This US government will not stay in office forever… But history will judge other nations based on what they do today.”[9]