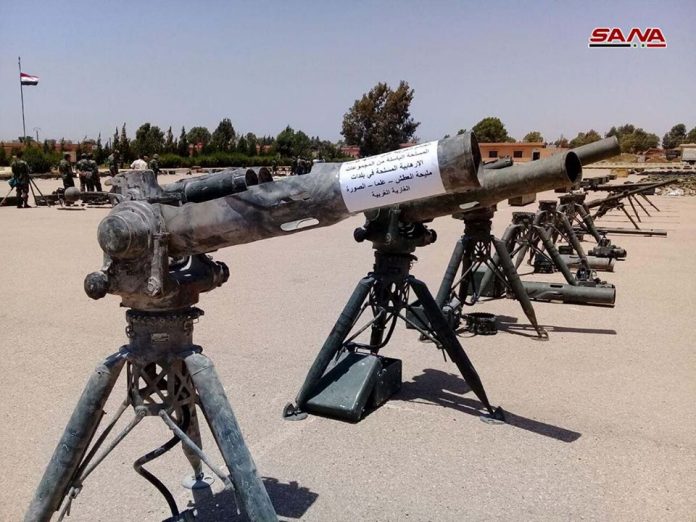 US FORCES LEAVING AL-TANF…AND SYRIA: RUSSIA REMAINS IN THE LEVANT

[ Editor’s Note: The worm is turning in Syria. Even Israel is accepting the inevitable, that Damascus will gain control over its Jordanian border. Tel Aviv’s focus now is on having no Syrian troops in the demilitarized zone – a fake complaint – as Damascus has not indicated such an interest.

Israel is still keeping a major ISIS command on its border, one it commands and supplies, according to our sources.  Damascus will go after this too, perhaps Putin and Trump will have a chance to discuss this on the 16th.

Putin will be meeting with Trump, where wrapping up the Syrian conflict will certainly be on the agenda. There has been a lot of chatter about US forces pulling out of Al-Tanf, but not much said about its blocking the highway crossing to Baghdad in the SW corner.

Daraa will be occupied soon, which will continue the Damascus call for its refugees in Lebanon to return home to help rebuild their towns and cities. A new type of war, a logistics war to support rebuilding areas so that they are inhabitable, will begin. 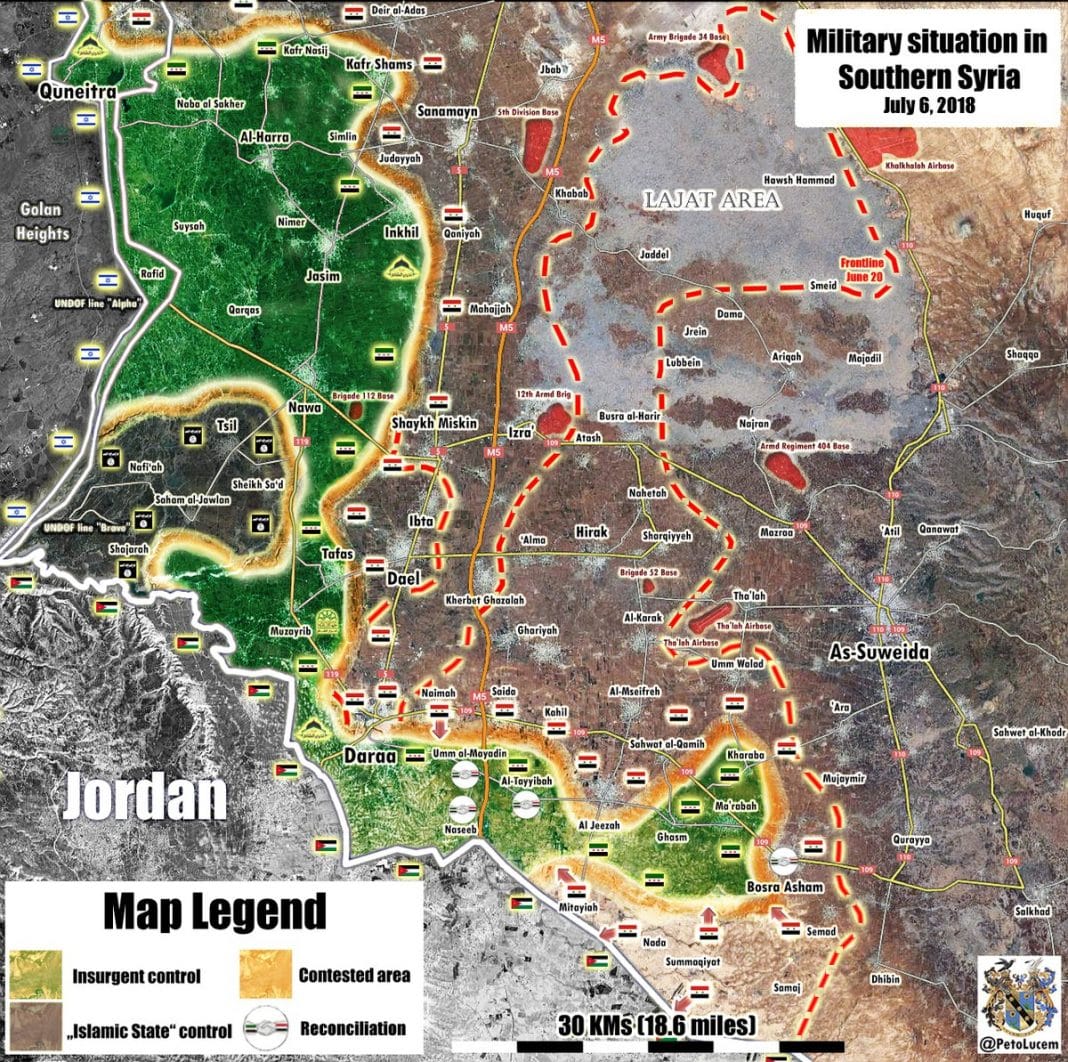 The SAA will then be able to shift the Daraa operation troops to Idlib and Deir Ezzor, and maybe even up to Raqqa which was an Arab, not Kurdish city before the war.

Moscow just pulled out more SU-25 fighter bombers, lowering its footprint as it has done before. Israel has not bombed any targets inside Syria lately, with its hands full with the strike on the Iraqi militia command center on the Syria border, assigned to stop ISIS infiltration back into Iraq.

The Popular Militia Forces have vowed revenge on the US, as Israel would never have run this attack mission (from a Saudi base) without US knowledge. The Russians also know who did it, but usually remain quiet about such things that don’t involve their troops.

The wild card in the Idlib battle is Turkey. The militants and terrorists cannot defend the area without Turkish supplies, so all eyes will turn to Erdogan to explain his de facto occupation of that area, especially if the US exits al-Tanf.

But nothing has been said about the US presence in the Kurdish NE, especially the Syrian oil regions they have captured and fought the SAA to hold. That oil is the economic foundation of a Kurdish State and will not be given up easily, especially with the US maintaining its Santa Claus supply chain.

To this date, the US military has banned all US journalists from reporting from that area. And I am not aware of corporate media ever making a fuss over it.

We will soon be shifting over to a post analytical review of the Syrian disaster, as more people in the know will start talking who have not done so to date. It will be an interesting effort, and VT will be in the middle of it all, as we made a huge resource investment to cover the war, including three trips … Jim W. Dean ] 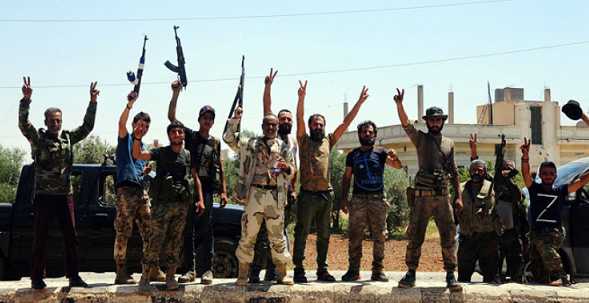 Russian advisors visiting the Syrian capital Damascus are confident that the US forces will pull out of al-Tanf and will also aim to completely withdraw from north of Syria (al-Hasaka and Deir-Ezzour) in the next six months.

According to top decision makers based in Damascus, US President Donald Trump is pushing his administration to approve an already prepared total withdrawal plan.

Despite Trump’s limited knowledge of foreign policy and being unaware of the consequences of his decisions in the international arena, however, he found no convincing elements – said the sources, who asked to remain anonymous – in the presentation by his administration where US forces could benefit from the continuation of their presence in such a hostile environment and without suffering hits in the future.

Trump’s biggest fear to see the US special forces deployed in the north of Syria and in Iraq returning to the country “in plastic bags”. He would certainly find it hard to offer any explanation for the US occupation of the Levant after the defeat of ISIS (the “Islamic State” group) or what remained of it in Syria and Iraq.

Moreover, Trump noticed that the hostility against its forces in Iraq was growing: Iraqi security forces (Hashd al-Sha’bi) vowed revenge on the US following the destruction by unknown jets (believed to be Israeli) of their command and control position on the Iraqi-Syrian borders with specific orders to stop and destroy ISIS terrorist groups  crossing into Iraq. The sources believe president Trump is not ready – despite his passionate support of Israel – to see US forces paying the price of a game Israel has excelled in playing for decades. Israel is used to accepting hits in exchange for the consequences of its action against its neighbours.

Russian sources involved in the preparation of the Putin-Trump summit, expected this month in Europe, believe the Russian President can offer enough guarantees to the US president to leave the Levant before US gets caught into the Syrian-Iraqi quagmire.

The key to attaining this objective is for Trump to hold enough elements to guarantee the safety of Israeli – to his mind – with no Iranian or Hezbollah forces deployed on the disengagement line of 1974. But of course Russia cannot offer any guarantee that Syria will not claim back its occupied territory in the Golan Heights.

Actually, Damascus is not concerned with offering any guarantees to Israel. Nevertheless, since the central government doesn’t need friendly foreign units deployed in the country once all of the Syrian territory occupied after 2011 is liberated (including the north), the Syrian President Bashar al-Assad can guarantee the control of the Syrian army throughout his country.

The only exception remains on the borders between Lebanon and Syria, where close collaboration with the de facto forces on the ground is needed by both sides to prevent the smuggling of weapons and the passage of jihadists across the borders.

Russian considers that the US and Israel have accepted the defeat of the “regime change” goal in Syria and that this failed attempt, after over 7 years of war, strengthen the “Axis of the Resistance” despite billions of dollars invested to break off Syria from this “axis”.

Moreover, it is aware that it was the Obama administration that allowed ISIS to grow without timely intervention to stop it, creating a local force, in Iraq hostile to the US. The American establishment fears that its presence in Syria on the borders with Iraq will create more damage to the US-Iraqi relationship which is still “under control” with Prime Minister Haidar Abadi in power.

The threat launched by Kataeb-Hizballah Iraq against the US forces and mentioned by Lebanese Hezbollah leader Sayed Hasan Nasrallah has created serious concern among US military personnel and within the political leadership, whose objective is to avoid the 2003-2011 experience (being attacked by both Sunni and Shia during the US occupation of Iraq).

On the other hand, the US establishment is asking Russia’s support for the “deal of the century” initiative related to the Palestinians. Russia believes this is a US-Israeli manoeuvre to exchange Syria for Palestine, and that it is unrealistic. Russia has no power to impose on the Palestinians a stillborn deal.

Moreover, if the Russians deploy regular forces in Syria and put Assad out of the “Axis”, the Russians will be holding a dead card. The importance of Syria is due to its borders with Israel, its connections with the Palestinians and to both Iran and Hezbollah. If Russia takes away this privileged position of Syria in the Middle East, Moscow would be controlling a country with no leverage.

Both the US and Russia know that Trump is impatiently waiting for his establishment to agree the pullout of his forces from Syria. Therefore, there is no need for any concessions that Russia is not in a position to fulfil. Moscow wants to keep a good relationship with Washington – as many Russian officials have conveyed to both Damascus and Tehran.

Moreover, both Russia and the US are aware that Syrian and Iraqi resistance forces need only one objective to pursue in the coming years: attack the US forces.