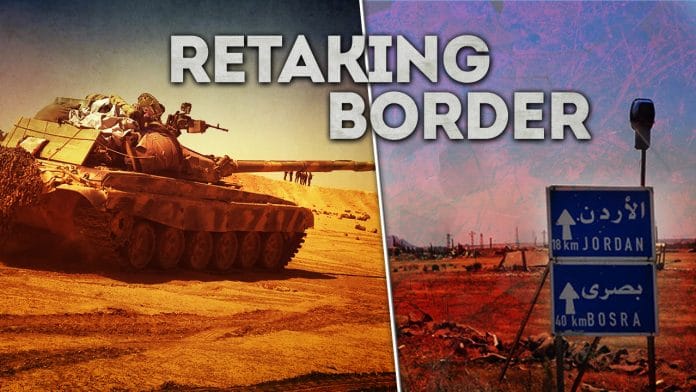 The military operation of government forces in southern Syria was once again resumed after the Damascus government and local militants groups had failed to reach any kind of fully-fledged reconciliation agreement that would allow to settle the situation in the area via a peaceful way.

On July 5, the Syrian Arab Army (SAA), the Tiger Forces and their allies liberated the town of Saida and the nearby abandoned air defense base in the province of Daraa. Additionally, the SAA advanced along the border with Jordan liberating over 10 villages between the border points of 71 and 79.

According to pro-government sources, the SAA faced a little resistance during their operation along the border. Russian troops were spotted there.

The operation is also supported by the Russian Aerospace Forces. Nonetheless, the number of airstrikes is limited. Currently, government forces are developing their operation in the direction of the Nassib border crossing.

Clashes between Turkish-backed militants, reportedly members of Ahrar al-Sharqiyah, and government troops have taken place in the village of Tadef in the province of Aleppo. Turkish-backed forces captured some positions, but were forced to withdraw from them later. According to pro-government sources, the withdrawal was ordered by the Turkish military to de-escalated the situation.

Such incidents show the real sentiments among the so-called moderate opposition groups backed by Turkey and limitations of Ankara’s control of these groups.

The ISIS-linked news agency Amaq claimed that on July 4 ISIS fighters had ambushed a convoy of the US-led coalition in the village of Namliyah in the eastern part of Deir Ezzor province. According to Amaq, ISIS employed 18 IEDs against the convoy killing four US troops. Other sources say that only two US servicemen were killed. The US-led coalition has not commented on these reports so far.

Meanwhile, the US-backed Syrian Democratic Forces (SDF) have captured the villages of Madinah and Qabr Taha from ISIS in the southern part of Hasakah province. The SDF is continuing it operation in the direction of the Tuwaymin area.