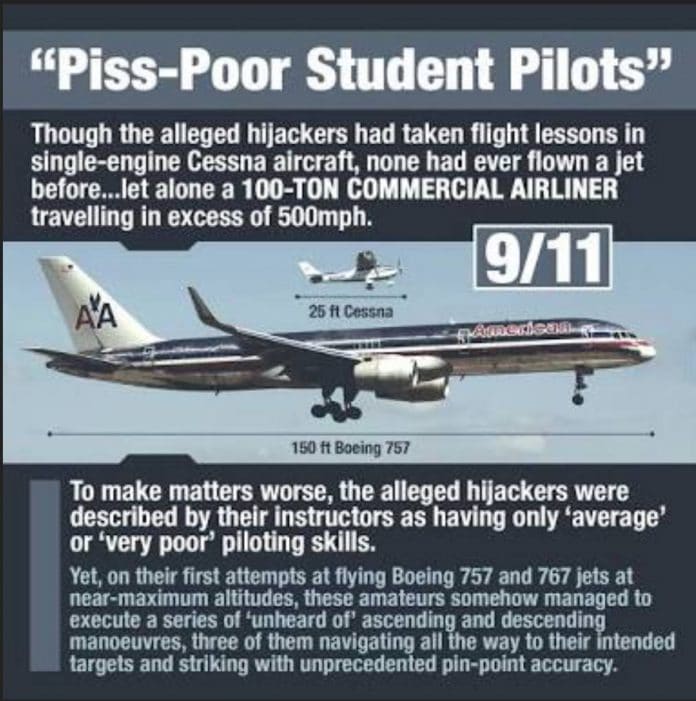 Editor’s note: With no highjackers and our proof that nuclear demolition teams from Israel aided by Saudi intelligence did the deed…conclusive evidence we received from an insider/whistleblower…

I commenced flying Cessna aircraft fifty years ago in 1968, the planes allegedly used to train the 9/11 hijackers. I went on to achieve commercial, instrument, and multi-engine pilot ratings by 1970.

Subsequently, I entered US Naval Aviation as an officer in 1972 and went on to fly the four engine P-3 Orion aircraft for a cumulative period of ten years.

The alleged 9/11 hijacker pilots had perhaps a few hundred flight hours and were poorly trained and inexperienced pilots.

I can unequivocally state that there was no way that these pilots could have flown the 9/11 aircraft profiles and speeds which, incidentally, exceeds the maximum achievable airspeed of a B-757/767 aircraft by 140 knots at sea level. I could not have flown them myself.

The ONLY reason that the global populous fell for this lie is that 99.999% of the population are not pilots and do not realize the absurdity of the official 9/11 narrative!

Not one single pilot was permitted to testify before the 9/11 Commission to refute this ridiculous claim.