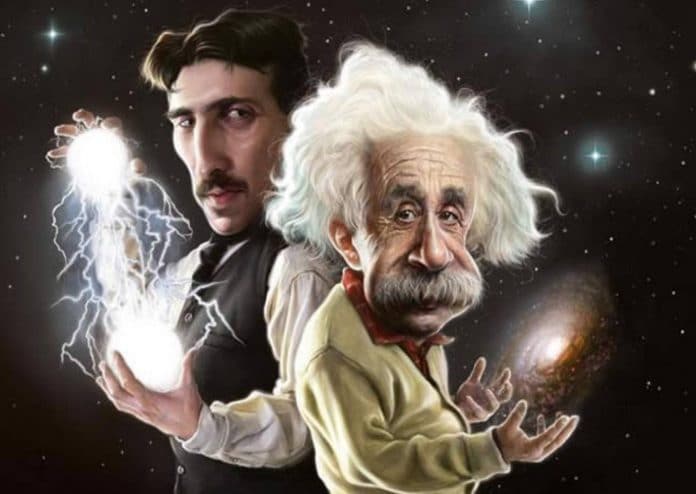 It’s virtually impossible to fathom how far off the course of “betterment of humanity” we have been driven by the power status quo (PSQ) and its central banks. People, we’ve landed in a ditch called by the PSQ, “arrested human development”. Perhaps more than any human ever born, Nikola Tesla could have steered us back on course with the Wheelwork of Nature (WON).

Nikola Tesla said, “Science is but a perversion of itself unless it has as its ultimate goal the betterment of humanity.” Too bad he is not driving—but wait, he actually is, in terms of the entire system of alternating current (AC) electricity that currently drives civilization, for starters, the list is long. So many contributions capitalized on by the PSQ came straight from the incredible mind of Tesla. But when he  threatened the very foundations of power giving the PSQ utter domination of humanity, Tesla was and still is probably the most lied about person of all time. Eric Dollard says about 99% of mainstream information about Tesla is “worthless”.

Instead of betterment of humanity Tesla offered, several generations of scientists have been wasted on trying to prove Einstein right. Tesla framed it perfectly:

“Today’s scientists have substituted mathematics for experiments, and they wander off through equation after equation, and eventually build a structure which has no relation to reality.”

This quote from Eric Dollard goes right to the hand holding the keys to humanity’s road trip through time:

“Tesla scared the central bankers senseless. They knew what his plan meant. Energy independence meant an almost complete loss of control of the people.”

All wars are bankster wars.

There really are two of them, both patented by Tesla. Here we’ll call surely the greatest invention—certainly the greatest potential for freeing humanity of  PSQ tyranny—the Tesla Coil. The other…perhaps we should call that other, popularized one, the Lodge Coil…alternating current (AC) SUPER SPARK!! generator with virtually no applications other than, as Wikipedia tells us:

“…an electrical resonant transformer circuit designed by inventor Nikola Tesla in 1891. It is used to produce high-voltage, low-current, high frequency alternating-current electricity.” And, “Today, their main use is for entertainment and educational displays, although small coils are still used as leak detectors for high vacuum systems.” The difference between the Tesla Coil, and the Lodge Coil could not be more extreme. Consider the difference between “…entertainment and educational displays….” and the Tesla Coil offering us the keys to the universe.

As Tesla said: “Of all the frictional resistances, the one that most retards human movement is ignorance, what Buddha called, ‘the greatest evil in the world’.” There is no greater pusher of ignorance than the PSQ—and no greater example than Nikola Tesla. Why would you have to say to almost everyone you ask about Tesla: No, he’s not a car?

As we ponder the Tesla Coil as a peerless breakthrough for humanity/peerless threat to the PSQ, please keep in mind Wikipedia’s “…low current, high frequency alternating-current (AC) electricity.” And consider Tesla’s seminal quote: “Science is but a perversion of itself unless it has as its ultimate goal the betterment of humanity.” It was actually Sir Oliver Lodge who perfected the Lodge Coil.

After his discovery of Radiant Electricity in 1889, Tesla discovered a new force using violently abrupt DC discharges. In 1892, Tesla presented his paper: “The Dissipation of Electricity”.

Well, most academicians of the day apparently misunderstood the magic in Tesla’s paper. Premier scientists including Sir Oliver Lodge thought, by Tesla referring to “high frequency”, that AC was involved in operation of the Tesla Coil. An enormous blunder by scientists the PSQ capitalizes in perpetuity…or at least until enough people learn the truth.

Tesla completely abandoned everything AC (a certain albatross around his neck the PSQ plays to the hilt) for the rest of his life, after his Tesla Coil put in his hands the WON, aether.

Tesla was now working in a new domain of physics based on DC discharges of electrostatic forces and the resulting release of kinetic radiant electricity from that king of forbidden technologies, capture and control of omnipresent aether.

Tesla’s explanations of his development of the Tesla Coil, behavior of aether at increasing “frequency” and shorter durations of the staccato discharges are so clear and compelling it has taken much PSQ suppression, diversion and disinformation to keep so many people perpetually blind of such a technological leap for the “betterment” of humanity.

The PSQ banned him from history books, textbooks, even from the Smithsonian.

On The Road to Wardenclyffe: Colorado Springs Station

Tesla went to Colorado Springs in mid-May 1899 with the intent to research:

Conditions of propagation of currents through the earth and the atmosphere

Tesla believed it might be possible to transmit power without wires where the air was thinner, and thus, more conductive.

Tesla’s station sported a 142-foot metal mast topped with a large copper ball, and a roof that rolled back so as not to catch fire. Inside, a very large Tesla Coil provided the magic, the WON; a huge magnifying transmitter provided reach.

Back in 1893, at a meeting of the National Electric Light Association, Tesla said it was “…practical to disturb, by means of powerful machines, the electrostatic conditions of the earth, and thus transmit intelligible signals, and, perhaps, power”.

Tesla measured most everything, and found during the Colorado station’s shocking electrical displays, that the earth was “…alive with electrical vibrations”. Tesla believed lightning ground strikes, because the earth was a giant conductor, (as Tesla said, like a charged metal ball) induced powerful waves that traversed the entire planet.

Tesla produced his own “lightning bolts”, bigger and bigger—until he burned out the windings of the power station generators. The El Paso Power Company said they would give him no more power. No problem, Tesla had learned all he needed for his ultimate gift to humanity, Wardenclyffe.

Think about wars for oil and gas disguised as humanitarian interventions. Millions of innocent people slaughtered, millions of refugees. All the soldiers coming home in body bags to fill flag-draped coffins, or maimed for life physically, mentally, or both and largely treated by the PSQ as spent cannon fodder. Think about our power grid vulnerability to electromagnetic pulses (EMP) from solar mass ejections…or the more popularly-terrorizing, nuclear bomb detonation at the right altitude. The list of things Wardenclyffe was the key to transcending as elegantly as everything perfected in Tesla’s mind is unfathomable. And that’s how the PSQ gets away with calling Wardenclyffe, “Tesla’s million dollar folly”. For the PSQ it was pedal to the metal to blast into the public mind what Buddha called “the greatest evil in the world”, ignorance.

Most people that have any awareness at all regarding Wardenclyffe, have been hoodwinked into thinking the 187-foot tower with the copper dome was meant to, somehow blast electricity through the air, a long ways. Precisely the opposite of Wardenclyffe’s function.

The Wardenclyffe tower was a receiver of aether powered by a giant Tesla Coil. An enormous Magnifying Transmitter fed the antenna Beneath the tower. Reaching to a depth of 120 feet, it was a huge 1/4-wave antenna effectively fifty-miles long, shaped like a Christmas tree tuned to transmit the true electricity (WON) through the ground to any place on earth at the earth’s resonant frequency, 7.83 hertz. A simple tuned receiver stuck in the ground could replace all the wires of our power grid with many more such towers circling the globe. That’s it.

Tesla said, regarding Power, PSQ style: “No free energy device will ever be allowed to reach the market”.

And he said, “Invention is the most important product of man’s creative brain. The ultimate purpose is the complete mastery of mind over the material world, the harnessing of human nature to human needs”.

Congress had a better idea with their “Invention Secrecy Act”, deciding in 1951 that in this “nation of ideas”, certain ideas must be kept hidden.

Via Freedom of Information Act requests, such as the Federation of American Scientists have revealed that the number of secrecy orders has been increasing in recent years. By 2012, more than 5,300 patent applications had been tagged for the nebulous protection of national security, many of them decades old.

The Pentagon, Department of Justice, National Security Agency, Department of Homeland Security—such are where final decisions are made regarding the tens of thousands of patent applications manually examined every year under the Invention Secrecy Act. Tesla sure knew that no “free energy” device would ever be allowed to endanger the (PSQ). The fossil fuel kaleidoscope, and nuclear power were their cash cows. Even Einstein, darling of the PSQ, said that “Nuclear power is one hell of a way to boil water”. He sure got the hell part right.

So what would happen if we opened and utilized the present Nikola Tesla gave to humanity? No more power grid, or the stupendous profits involved; no more terrorizing humanity with possibility of an EMP sending us back to the “stone age”. No more full-spectrum destruction of our future via burning of fossil fuels (all the way to Canadian tar (bitumen) and the hideous “dilbit” pipelines of doom). Consider coal, and its mercury fingerprints touching even the most formerly pristine places on earth. No more wars for oil. No more nuclear reactor meltdowns like currently killing the Pacific ocean (Fukushima). The list is long, deadly, and completely avoidable—not counting the horrendous damage already wrought upon our tiny life bubble in a hostile universe. Mainstream media is like a horribly polluted and fermenting river of lies screaming at anyone intelligent and aware and actually thinking freely that freedom of energy is the PSQ’s worst nightmare. Triumph of ALL things Tesla would be humanity’s sweetest dream.

The river of lies does still have clear and unpolluted tributaries of truth about Tesla. Difficult to find, but they still flow. Find them before they are damned by the PSQ, and, dammed.

With Tesla on our side, we could have WON long enough ago to have an enlightening future, instead of the…well, just look and learn enough about Nikola Tesla. Help spread truth. There’s no better future for humanity than what he envisioned, and put within reach—a hostile, inhuman, bloody Satanic century ago.

In Tesla’s own words:

“Let the future tell the truth, and evaluate each one according to his work and accomplishments. The present is theirs; the future for which I have really worked for, is mine.”

Rand Clifford lives in Spokane, Washington. He has published over 100 Internet articles since 2007. His novels, CASTLING, TIMING, and Priest Lake Cathedral are published by StarChief Press. Contact for Rand Clifford: [email protected]