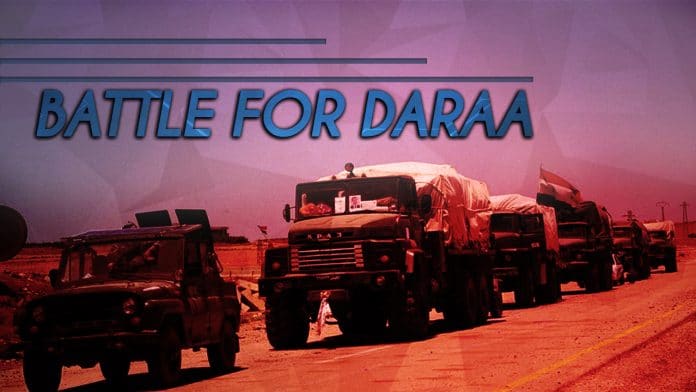 Pro-government forces have liberated about 600km2 from militants in southern Syria over the past week.

Units of the Syrian Arab Army (SAA), the Tiger Forces, the 4th Armoured Division and the National Defense Forces (NDF) have established control over the Nasiba border crossing, the towns of Umm al-Mayadi, al-Tayyibah and multiple nearby points.

Additionally, the SAA and their allies have captured a large chunk of the border reaching the town of Khrab al-Shahm as well as isolated the militant-held part of the city of Daraa from the eastern direction.

A source in the SAA told SouthFront that militants besieged in the city of Daraa are currently negotiating with representatives of the Syrian government and Russia. The source added the militants may soon surrender weapons and accept an evacuation agreement.

According to photos released by Syrian media, militant groups in southern Syria have already surrender to government troops a notable number of military equipment, including battle tanks and armored personnel carriers, as well as anti-tank guided missiles.

This is only the first batch of weapons and equipment that the so-called moderate opposition will have to surrender under the reconciliation deal in the area.

An interesting fact that a part of militant groups, including Hayat Tahrir al-Sham, operating near the Israeli-occupied Golan Heights is refusing to accept any peaceful solution in the current situation, at least by now.

On July 8, ten fighters of the al-Qaeda-affiliated group Horas al-Din were killed during a failed attempt to attack SAA positions near the village of Luwaybidah in southeastern Idlib. The attack followed a declaration by Hayat Tahrir al-Sham that the area of southern Idlib and northern Hama are a military zone. Hayat Tahrir al-Sham also called on other groups to unite effort to carry out an operation against the SAA that would also help militants in southern Syria.

On July 5, ISIS cells carried out IED attacks against the US-backed Syrian Democratic Forces (SDF) in the districts of al-Noor and al-Hadiqah al-Bayda in the center of the city of Raqqa, according to Amaq. The ability of ISIS to operate within the SDF-held area shows gaps in security system established by the US-led coalition and its proxy force in northern Syria.

On July 6, the Organization for the Prohibition of Chemical Weapons (OPCW) published a preliminary report on the so-called Douma incident, which took place on April 7. The report says that the OPCW found no traces of any nerve agent at the site of a suspected chemical attack. This contradicts to claims made by the White House’s April 13 report, which argued that Sarin was used in the area.

The OPCW report said that “various chlorinated organic chemicals” were found on the site but it did not confirm that Chlorine was used. Despite this, the MSM has actively promoted a false narrative that Chlorine was “highly likely” used in the area.

The US and its allies accused the Damascus government of conducting a chemical attack in Douma and used this as a pretext to carry out a massive missile strike on the country. However, so far, the US-led bloc has failed to provide any evidence confirming its claims.