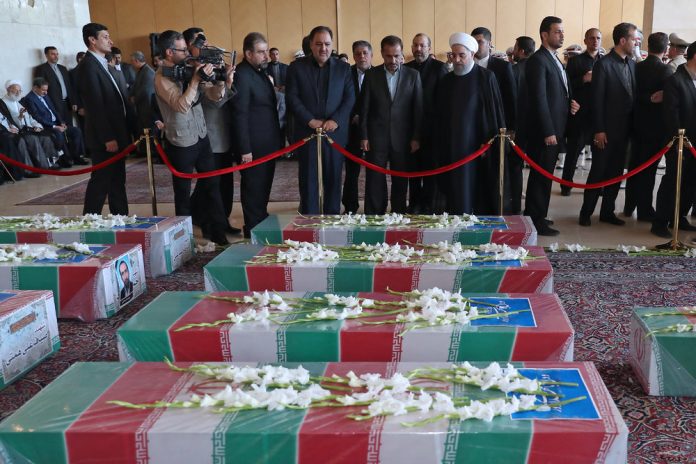 [ Editor’s Note: The ADVT has over 16,000 terror victim families, 12,000 of them killed by MEK, which is supported by the Israel and the US, with John McCain being one of its booster cheerleaders.

Aiding and abetting international terrorism is not illegal in the US, it seems, once you reach a certain political, military or security level in government. With 16,000 terror victims, Iran has had the equivalent of four 9-11s inflicted upon its citizens, and yet has never declared war on the US.

Corporate media completely ignores the terrorism of Western actors, especially countries, as either willing ideologues or afraid of the consequences of speaking out. Frankly, this stand down has led to the situation we are watching in Yemen, where war crimes are a common occurrence and the UN is reduced to begging to be able to bring in critical aid.

This goes on while the major Western arms suppliers and their technical people are major supporters of this effort, with not a single governmental, military, or security executive resigning in protest, or refusing to be part of such a machine.

We don’t often publish press releases, but these folks are an exception, as they have suffered for a long time with no concern from the international community. Gordon and I have spoken at their last two UN conferences in Geneva, by Skype … Jim W. Dean ]

Association for Defending Victims of Terrorism (ADVT), Public Relations Section – The expert meeting entitled “Asylum and Terrorism” was held by ADVT in collaboration with the Faculty of Political Science of Islamic Azad University, Central Tehran Branch on 3 July 2018.

It was attended by Dr Mahmood Abbasi, Deputy of International Affairs of Ministry of Justice, Dr. Ali Reza Ebrahim Gol, professor of Tehran University, Ms. Fatemeh Ashrafi, chief executive of Association for Protection of Refugee Women and Children (HAMI), Mr. Ian Biggs, the Australian Ambassador to Iran, Mr. Mohaghegh, second secretary of the Afghan Embassy, and some of the families of the victims of the Hafte Tir bombing in the Faculty of Political Science of Islamic Azad University, Central Tehran Branch.

The experts of law and diplomats addressed the crisis of asylum caused by terrorism.

At the meeting, Dr. Abbasi, Deputy of International Affairs of Ministry of Justice and Human Rights said the regional asylum crisis appears to become a global problem in terms of genocide because people are killed or flee from the countries affected by terrorism including Iraq and Syria while they cannot obtain asylum.

Referring to Western support for terrorist cults, especially the MEK, he pointed out that these support is the cause of spread of terrorism and violation of human rights in the international arena.

The Australian ambassador to Iran said that the common characteristic of Australia and Iran is that we have both been refugee admissions. This is not a cost or burden, but it is a great success for a great country. An effective way of preventing or reducing immigration and political asylum is the tendency towards international consensus through the United Nations.

The second secretary and head of the Department of Immigrants and Refugees of the Afghan embassy said that the problem is that there is no honest definition of terrorism, which has led to the spread of violence and terrorism in the communities. Terrorism is the cause of destruction, immigration and war. States must reach a common and comprehensive definition of terrorism and sooner or later.

He regarded the victims of terrorism as worthy of attention and support, and pointed out the history of the crimes committed by the MEK terrorist cult and said that their activities in some countries is a clear example of supporting terrorism and a double standard policy toward this heinous phenomenon.

Ms. Ashrafi, chief executive of Association for Protection of Refugee Women and Children (HAMI) stated that refugees are the largest victims of terrorism. According to UNHCR, there are 68 million displaced people and immigrants around the world and a significant number of them are Muslims in crisis-stricken countries.

Dr. Ebrahim Gol, professor of the Tehran University, said that asylum is a tool for terrorism because some people abuse the status of asylum and commit terrorist acts in the host country. When the perpetrators are granted asylum and use the cover of asylum for terrorist acts in the host country or other states and the granting state are informed of it, the international responsibility of the granting state is conceivable.

Mr. Ghahremani, a member of the ADVT, warned about the granting asylum to the terrorist criminals and considered it contrary to the international law. He said: “Abu Kamdadah Jordanian” and “Abu Hamza” in the UK, “Saeed Aref” in France, Abdul Rahman Bo’anan Maghrebi “in Finland and Haroun Munis in Australia, and Mohammad Reza Kolahi Samadi in the Netherlands, are members of the al-Qaeda terrorist cults, ISIS and the Mujahedin-e Khalq who are examples of terrorism under the cover of asylum in the international arena.

He added that the issues of asylum and extradition of terrorists have been subject to political-economic benefits in recent years. Referring to Article 12 of the EU Asylum Directive, adopted in April 2004, he said, “Brutal measures, in particular, even committed with the claim of “political intent and motivation” can be regarded as serious non-political crimes.

The member of ADVT proposed two important and constructive suggestions for reducing granting asylum to such people:

1- Crimes which are political and also a general crime such as murder, terrorism is the obvious example of it, regardless of the crime severity, the perpetrators must not be granted asylum and they must be extradited according to international law.

2- Perpetrators of military and political crimes can be extraditable in case of damaging and weakening democracy and freedom considering legal and not political issues.

Mr. Ahmadi, ADVT board member, while outlining the issues related to asylum and terrorism, provided the following strategies to prevent the terrorists from abusing the right to asylum:

A report by Amnesty International has also been read in order to clarify the issue of asylum and terrorism. In the report it is emphasized that “One of the biggest dangers of the asylum crisis is the spread of terrorism around the world, an issue that has forced the immigrant countries of the European Union to review the immigration laws.”

At the end of the meeting, the families of the martyrs of Hafte Tir bombing interviewed with the Iranian and foreign media and requested from from the Dutch judicial authorities to release the information of the Kolahi Samadi’s case, the perpetrator of the Hafte Tir bombing. They also requested the Iranian Ministry of Judiciary and the Iranian Ministry of Foreign Affairs to provide the conditions to file a complaint about the case in the Dutch court as a third party.