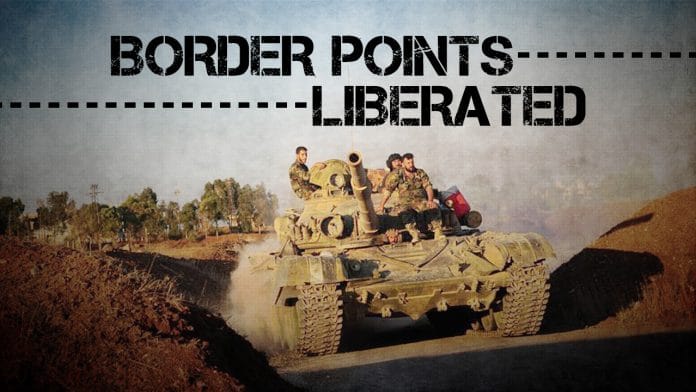 On July 10, Russian-backed negotiations between the Damascus government and militants in the area continued. However, if militant groups continue refusing to surrender, they will face military action, which they will find hard to contain.

Thus, despite hysteria in the mainstream media and multiple anti-Russian and anti-government statements by representatives of the so-called moderate opposition, they have few options and little time to decide.

The only chunk of the Jordanian-Syrian border in the province of Daraa which remains in the hands of militants is the ISIS-held area east of the Israeli-occupied Golan Heights. The expected SAA military operation against ISIS as well as Hayat Tahrir al-Sham east of the Golan Heights is already causing concern among the Israeli leadership.

On July 9, Israeli Defense Minister Avigdor Lieberman said that his country will “respond harshly” to any attempts by the Syrian military to enter the demilitarized area in the Golan Heights.

His statement followed airstrikes by the Israeli Air Force overnight into July 9 on the T4 airbase in the Syrian province of Homs. The Syrian military said that its air defense forces intercepted a few missiles and targeted an Israeli warplane. The military admitted that some missiles hit the base. The Israeli side denies that any of its warplanes were hit.

It’s highly likely that Tel Aviv will use the Syrian military operation against ISIS and Hayat Tahrir al-Sham in order to accuse Damascus of violating the 1974 disengagement agreement and to conduct more attacks on government forces. However, a limited number of strikes will not be able to change the strategic situation in the area or to prevent the SAA from retaking it.

In northern Latakia, militants launched another attack on SAA positions from the so-called Turkish zone of responsibility in the Idlib de-escalation zone engaging government troops in the Turkmen Mountains area.

The SAA lost no positions, but according to pro-militants sources, a few government troops were killed or injured.

The militant-held province of Idlib remains the stronghold of Hayat Tahrir al-Sham (the former branch of al-Qaeda in Syria) and other radical groups. These groups await their turn in the ongoing anti-terrorist operation of the Syrian-Iranian-Russian alliance.

On July 9, Syrian President Bashar al-Assad once again stated that Damascus will “liberate the territories of all Syrian provinces, no matter whose control they are under.”