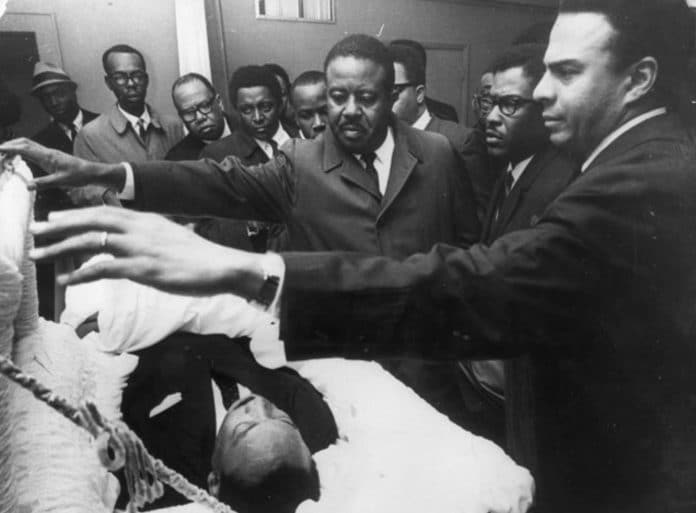 Bill Willers for Veterans Today
There are now in the public sphere two totally contradictory narratives of the assassination in 1968 of Martin Luther King, Jr. with each being advanced again and again over the years by respective advocates as if the other did not exist.
Attorney William Pepper, confidant of Martin Luther King, Jr., became convinced in 1978 that James Earl Ray, the officially declared lone gunman, was innocent. Years of investigation led to his 1995 book, “Orders to Kill”, in which Pepper presented evidence of governmental involvement in the assassination. Three years later, Gerald Posner, already famous for his support for the Warren Commission’s report concerning President Kennedy’s assassination, published “Killing the Dream”, a defense of the official governmental contention that Ray was the assassin. The King Family also believed Ray innocent, but due to governmental refusal to pursue a criminal trial, there was instead a 1999 civil trial, “The King Family vs. Loyd Jowers et al”. Jowers, who had admitted having received the rifle actually used in the shooting, was granted immunity to reveal all he knew. All facets of news media boycotted the trial, arguably the de facto “Trial of the Century”.
History A
The trial brought together three decades of accumulated information, much for the first time. James Earl Ray was shown as set up to take blame for the killing. Some Memphis policemen had met in Jim’s Grill, where Jowers worked, while planning the assassination. The fatal shot, rather than fired by Ray from a rooming house, as officially reported, was seen by eyewitnesses to have come from a brushy area across the street from the Lorraine Motel. Police units near the Lorraine were called away prior to the shooting, as were the “Invaders”, a gang being lodged at the Lorraine while coordinating with King on the planned sanitation worker’s strike. Inexplicably, within hours following the assassination the brushy area was cut to the ground by the city. Many witnesses were not interviewed, and those with accounts at odds with the governmental explanation were ignored.
The 30-06 rifle presented as the murder weapon had actually been discovered next to a shop door wrapped in a bedspread ten minutes beforethe shooting. Moreover, it had not been sighted in so could not have hit at point of aim, and bullets found with it did not match the bullet taken from King’s body. The bathroom from which Ray is supposed to have fired was seen by a witness to be empty at the time of the shooting, and observers saw Ray drive away from the area a quarter hour before the shooting. Jowers, who worked at Jim’s Grill, adjacent to the brushy area, was handed a still smoking rifle after the shot was fired, which rifle he hid until giving it the following day to a collaborator to throw into the Mississippi river.
US Army Intelligence maintained surveillance on King, who had become a problem for the Federal Government through his opposition to the Vietnam War and for his plans for a Poor People’s Campaign aimed at obstructing governmental function. Army photographers, positioned on a roof near the Lorraine, photographed the shooter lowering his rifle and departing the brushy area. There were multiple military snipers as backup shooters if needed. Elements of the military, CIA, FBI, Alabama National Guard, Memphis Police, and the Mafia were identified as components of a carefully organized conspiracy.
The trial ended with the jury unanimous in finding that King had been assassinated not by James Earl Ray but by means of a conspiracy involving Jowers (30%) and “others including governmental agencies” (70%).Although the trial did not make the news, a Washington Post editorial (Dec. 12, 1999, pg B08) stated “The more quickly and completely this jury’s discredited verdict is forgotten, the better”. (Note: That editorial is apparently no longer available in the Post’s online archive). In 2003, Pepper published‘An Act Of State’, a book detailing the court’s findings.

In 2010, writer Hampton Sides published ‘Hellhound On His Trail’, like Gerald Posner’s 1998 book an elaboration of the official governmental report portraying James Earl Ray as lone assassin. Sides described movements of King and Ray during days leading up to King’s killing on April 4, 1968 and of the ensuing hunt by the authorities for Ray. In minute-by-minute detail, Sides has Ray, a racist interested in a reported bounty, following King to Memphis and renting a room in a boarding house with a clear view of the balcony outside King’s Lorraine Motel room. With King in view, Ray rests a recently purchased, scoped 30-06 on the bathroom windowsill and fires, mortally wounding King. Ray then wraps rifle and other items in a bedspread, runs from the building and, seeing police within view of his car, ditches the suspicious looking bundle next to a shop door. He then departs and is on the run until his arrest.
Meanwhile, King was hurried to ER at Catholic-run St. Joseph’s hospital, where Drs. Ted Galyon and Rufus Brown attended him. Shortly, others, including various specialists, entered. Ralph Abernathy remained in the room along with Reverend Bernard Lee. At 7:05 PM King was pronounced dead by Dr. Jerome Basso, who closed King’s eyes. The bullet found in King is reported by Sides to be consistent with ammunition purchased by Ray and found with his rifle.

Although Sides claims to have explored all available sources of data, including “court proceedings”, declares that he “drew from a wealth of memoirs written by the King Family”, and lists the King Center in his bibliography, there is mention neither of the 1999 trial nor of William Pepper’s two books, published years earlier than his 2010 book. However, and despite years of media censorship, awareness of both the trial and of Pepper’s books had spread by 2010, so one must conclude that Sides’ omissions were deliberate. The evasion of such a quantity of opposing information is fatal to “Hellhound On His Trail” as an objective history.

Nevertheless, in 2010, the same year as the release of “Hellhound On His Trail”, the PBS television program “American Experience” aired, “Roads to Memphis”, a documentary film described as “the entwined stories of assassin James Earl Ray and his target, Dr. Martin Luther King, Jr.” The film, for which Sides was historical consultant, was based on his book and featured commentary by Sides himself, as well as by author Gerald Posner, an established supporter of the official governmental account. As the book, so the film, in that there was no mention of either the trial or of Pepper’s books. Like “Hellhound On His Trail”, “Roads to Memphis” serves as forceful support for the Government’s narrative.

William Pepper published “The Plot To Kill King”a 770-page detailed summation of the Government’s role in the killing with new material gathered since his 2003 book. Here, Pepper traced the long-term strategy to bring both King and Ray to Memphis. Half of the book consists of appendices revealing military, CIA, FBI, Memphis police and Mafia involvement in the assassination and supportive of Ray’s innocence. The claim by attorney Percy Foreman that he had never pressured his client into a rash, untimely guilty plea is shown to be a lie by a letter from Foreman in which he offers Ray money “…contingent upon the plea of guilty and … without any unseemly conduct on your part in court.” There is a photocopy of the letter in the book’s appendix.
Pepper writes, “At Hoover’s request, James [Earl Ray] had been profiled as a potential scapegoat.” Clyde Tolson, Hoover’s deputy at the FBI, and shown by Pepper to be a central figure in the conspiracy, paid a prison official to engineer Ray’s escape from a prison, so that this designated patsy could thereafter be managed by another conspirator, Raul Coelho, who would then guide Ray to Memphis. Tolson distributed cash, some of which apparently made its way to Jesse Jackson. Jackson, along with others within King’s group, is depicted as an informant paid by the FBI to relay information on King. There is also a report that it was Jackson who had King’s room changed from the ground floor of the Lorraine to the more exposed second floor with its open balcony, and who ordered the Invaders away from the Lorraine shortly before the shooting. Pepper claims that evidence indicates the actual shooter to have been Memphis Police sharpshooter Frank Strausser.
Mortally wounded, King was taken to St. Joseph’s Hospital where, surprisingly, “a large presence” of military intelligence officers had taken positions well before the shot was fired. More surprisingly, the hospital’s head surgeon, Breen Bland, accompanied by two men in suits, entered the hospital room in which King was being attended by medical staff. Bland is quoted as shouting, “Stop working on the nigger and let him die” and then ordering everyone out of the room. Personnel hearing the sound of men clearing their throats lingered behind and reported seeing Bland and his two accomplices spit on King, after which Bland smothered King to death with a pillow (Note: Pepper describes this in a 2017 lecture,here on Vimeo).
2118: PBS Takes a Stand
In the spring of 2018 there were multiple airings on the PBS program “American Experience” of Hampton Sides’ 2010 film “Roads to Memphis”. This is renewed reinforcement by PBS of the Government’s depiction of James Earl Ray as lone assassin and an excellent illustration of how televised media can function as servant of the State.
Sides’ contention that he drew from memoirs of the King Family as part of his thorough research is at odds with a filmed interviewby ABC of the entire King Family. From dialogue, as well as from the youth of the family members, it is clear the interview was pre-1999 Trial (Note: The link indicated is to a 2-hour piece available, at the time of this writing, on YouTube. Start at 1:03 for the 5-minute segment of the King Family interview). In it, Dexter King states, “Evidence I’ve seen or heard will vindicate or exonerate James Earl Ray”. When asked who was behind the assassination, Dexter continues, “I am told that it was part-and-parcel Army Intelligence, CIA, FBI”. When the interviewer says, “This is a staggering idea to carry around”, Dexter answers, with a short derisive laugh, “I think we knew it all along. It’s why we’re not, like, jumping out of our seats, because we’ve known for years.” How on earth could Sides (or Posner) have overlooked such as that?
Although the keepers of the nation’s information gates have striven to bury the results of William Pepper’s four decade quest for the truth of King’s death, millions by now have been exposed to the fact that two opposing explanations of King’s murder continue to exist. Theologian James Douglass, who attended the 1999 trial, later wrote an articlein which he stated, “The Memphis trial has opened wide the door to our assassination politics. Anyone who walks through it is faced by an either/or: to declare naked either the empire or oneself.”