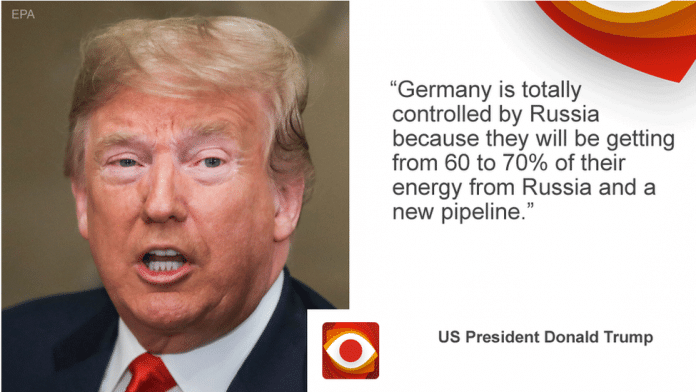 The claim: Germany imports 60% to 70% of its energy from Russia.

Reality Check verdict: Germany relies on Russia for most of its imports of natural gas. But gas makes up less than 20% of Germany’s energy mix for power production.

At a Nato summit, US President Donald Trump criticised Germany for importing so much of its gas from Russia while expecting the US to pay to protect it from Russia.

“Germany is totally controlled by Russia because they will be getting from 60% to 70% of their energy from Russia and a new pipeline,” he said.

German Chancellor Angela Merkel has responded by saying that having had experience of a time when part of Germany was controlled by the Soviet Union, she is now confident that the whole country is independent.

Mr Trump is right that Germany relies on Russia for most of its gas imports. Eurostat estimates that Russia is responsible for between 50% and 75% of Germany’s gas imports.

The commodities brokerage Marex Spectron told Reality Check that about 60% of Germany’s gas was imported from Russia, with most of the rest coming from Norway.

But that does not mean that 60% of Germany’s energy comes from Russia – Germany’s energy mix for power production is about 40% coal, more than 30% renewables, less than 20% gas and 10% nuclear, according to Marex Spectron.

The country is trying to reduce its use of coal and cut out nuclear altogether, which means its use of gas and renewables is likely to increase.

Some of the extra gas is likely to come from Russia as a result of the building of a new pipeline under the Baltic Sea called Nord Stream 2, which Mr Trump referred to.

The German government has stressed that the €9.5bn ($11.1bn; £8.4bn) pipe from Russia to Germany is being funded by private companies and that no German taxpayer money will be spent on building it.

Nonetheless, President Trump pointed out that former German Chancellor Gerhard Schroeder was involved in the leadership of the project.

But even with the new pipeline, the use of gas in Germany will not increase by nearly enough to mean 60% to 70% of energy will be coming from Russia.