We’re going to talk about Bergdahl, but in a context of America’s corrupt war machine, and even that’s wrong.  There is nothing “American” about America’s military.  I won’t even say we fight for Israel, though we do.  We are a nation of mob enforcers, and as studies are beginning to prove, enforcers for a Sephardic banking organization, with newfound names like Warberg or Rockefeller, that dates from the Middle Ages and before.

We are even finding that these Sephardics that have staged so many wars, really did try to eliminate the Ashkenazim, the European Jews, also known as the Khazars, for over 150 years including in an alignment with Adolf Hitler.  Ian Greenhalgh will be putting this hypothesis together, an eye opener.

Beau Bergdahl was beaten and starved for 5 years by the Taliban in Pakistan.  There are questions, in particular how he fell into the hands of the “fake Taliban” that is trained and paid for by Israel and India to destabilize and terrorize Pakistan.  From Wikipedia, perhaps Trump or even the Pentagram should read something from time to time rather than simply watch Fox News:

Tehrik-i-Taliban Pakistan (TTP; Urdu: تحریک طالبان پاکستان‬‎; “Taliban Movement of Pakistan”), alternatively referred to as the Taliban, is a terrorist group which is an umbrella organization of various militant groups based in the northwestern Federally Administered Tribal Areas along the Afghan border in Pakistan. Most Taliban groups in Pakistan coalesce under the TTP.[10] In December 2007 about 13 groups united under the leadership of Baitullah Mehsud to form the Tehrik-i-Taliban.[11] Among the Tehrik-i-Taliban stated objectives are resistance against the Pakistani state, Pakistani army, enforcement of their interpretation of sharia and a plan to unite against NATO-led forces in Afghanistan.[11][12]

The TTP is not directly affiliated with the Afghan Taliban movement led by Haibatullah Akhundzada, with both groups differing greatly in their histories, strategic goals and interests although they are both predominantly Pashtun.[12][13][14] The Afghan Taliban, with the alleged support of Pakistani Taliban, operate against international coalition and Afghan security forces in Afghanistan but are strictly opposed to targeting the Pakistani state.[13] The TTP in contrast has almost exclusively targeted elements of the Pakistani state although it took credit for the 2009 Camp Chapman attack and the 2010 Times Square car bombing attempt.[15][16]

This isn’t the Taliban the US is fighting, who are freedom fighters opposing a US invasion, much as the US faced in Vietnam, a war where I participated in combat.

If it were the real Taliban, not the nest of spies the US helps finance to destabilize Pakistan, it is possible we might have gotten him back earlier.

Another question, of course, why did he walk away? There were American defectors in Vietnam, Marines who “walked away” and actually joined the VC (and led Q84 company).  I spent weeks hunting them across Quang Nam province.

All of us knew, collectively, that the US mission in Vietnam was a sick joke and that we were fighting on the wrong side.  Nobody really there doubted that though, were someone to find a Vietnam vet today, 90% chance it is a phony.  It happens to me continually, people who are openly hailed as heroes in their communities, who speak publicly on their service.

They never served.  This has been going on forever.  We now have a commander in thief that considers going to a buggery academy military school was the same as going to Vietnam.

Watch the video, see the kind of sick pig we have in DC.

There are simple truths to US involvement in Afghanistan:

Vietnam was not an honorable war.  The 1.5 million American dead, including agent orange and countless unreported suicides, including those murdered by VA health care, a holocaust on its own, is an American tragedy.  Now we buy military, no longer $90 a month draftees, we pay $8000 a month for steroided freaks and America’s unemployed, a “professional military” far less qualified than any we have ever sent into the field.

Time we admitted this.  The draft brought us college grads as enlisted, a mix of classes no longer seen in America’s military.  Simply put, the volunteer army or professional army, or whatever the Perfumed Princes of the Pentagram choose to call it, is a threat against America.  Far from the best and brightest, America is now fighting, or as they call it “involved in kinetic operations” in 70 nations, most without approval of the legal governments, involved in missions supporting terrorism, all also “simply put,” working for the banks. 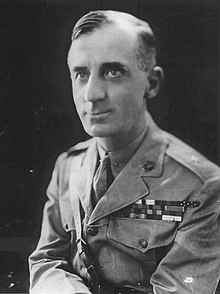 Major General Smedley Darlington Butler (July 30, 1881 – June 21, 1940), one of the most colorful officers in the Marine Corps’ long history, was one of the two Marines who received two Medals of Honor for separate acts of outstanding heroism.