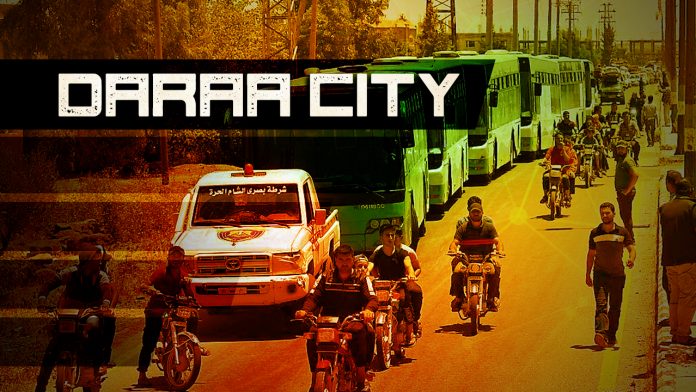 In the evening of July 12th, units of the Syrian Arab Army (SAA) and the Russian Military Police entered the southern, militant-held part of Daraa city de-facto restoring the government control of the area.

This part of the city had been in the hands of Hayat Tahrir al-Sham (formerly Jabhat al-Nusra, the Syrian branch of al-Qaeda) and its allies since 2012.

At the same time, militants started surrendering their remaining positions south of the city. These developments are a part of the reconciliation reached between the leaders of militant groups and the Damascus government with assistance of Russia.

Under the reached deal militants are handing over their heavy and medium weapons as well as military equipment to the SAA and are getting two options: to settle their legal status with the government or to withdraw to the militant held areas in the provinces of Idlib and Aleppo.

According to some pro-opposition sources, the Russians did not recommend militants to choose the withdrawal options during negotiations on the deal because Hayat Tahrir al-Sham forces in the province of Idlib will become a next target of the Russian-backed operation of the SAA. This open secret triggered a new round of complains in pro-militant media outlets and among pro-militant activists.

Meanwhile, the ISIS-affiliated Khalid ibn al-Walid Army entered the villages of Hayt and Khirbat Y’ala in western Daraa thanks to an agreement with members of the so-called moderate opposition there. Over the past few days, the Syrian Air Force has carried out a number of strikes on targets near Hayt thus attempting to deter the terrorist group. However, this did not help.

With the liberation of Daraa city, the remaining militant-held areas in western Daraa became the main target of the SAA and its allies. Some clashes have already been reported near Yadudeh and Muzayrib.

Cells of the Ghadab al-Zaytun amred group affiliated with the Kurdish People’s Protection Units (YPG) have carried out two attacks against Turkish-backed militant groups in the province of Idlib. 5 militants were killed in two separate attacks on July 9 and 10.

The repeated visits of Netanyahu to Moscow shows Israel’s attempts to get Russian support in Israeli attempts to drive Iranian forces out of Syria. However, the practice shows that Moscow is not going to assist Tel Aviv in this goal.