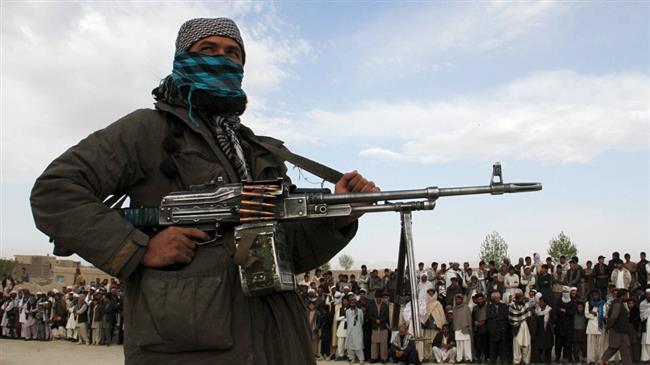 [ Editor’s Note: The US is showing itself on defense. One of the oldest PR tactics is always to accuse your opponent first of doing anything he can nail you with, as the majority of the public believes the initial accuser.

But the US is pushing a string here on the exploitation of the Afghan drug trade. We have reams of US involvement on that, including a former Bush cabinet Secretary that started a fake dry-cleaning chain of facilities in Afghanistan to import cleaning supplies for it, but which turned out to be the chemicals need to refine opium into heroin.

It was not too long after that even Predator drones were flying heroin out to Balkans bases with high security protection, part of the Bush massive “outsourcing” of security operations at the time. That money has been followed into black ops and a huge array of political campaigns ever since – virtually a heroin Santa Claus.

Zakharova could have been a surgeon, as she can fillet you while you are standing without you feeling a thing … Jim W. Dean ]

Russia has accused the US military of being the chief sponsor of Taliban militants in Afghanistan, saying that during the active presence of US-led NATO forces in the country, the production and distribution of narcotics had drastically surged there.

The accusations were raised on Thursday by Russia’s Foreign Ministry spokeswoman Maria Zakharova. She was responding to earlier US claims that Russia was collaborating with the Takfiri militants – what the official said was meant to mask America’s own “sponsorship of the Taliban” in Afghanistan.

Zakharova said Russian had limited contacts with the Taliban but said this was meant to ensure the safety of Russian citizens in the country and to support the stalled Afghan national conciliation process.

She said there was already evidence of US sponsorship of Taliban and emphasized that several probes conducted by special committees of the US Congress testified to that. Instances of this, Zakharova said, were reports that acknowledged certain portions of US weapons that had been reported “stolen” or fallen into “wrong hands” had in fact reached the Taliban.

The official recalled a 2016 report by then US defense secretary in which he had revealed that 1.5 million items of American weaponry had disappeared in Afghanistan and Iraq. Zakharova emphasized that armaments written off by the Pentagon as inventory losses could be used to equip “an entire army,” Moscow-based Sputnik International reported.

US sponsorship of terrorism in Afghanistan has also been underlined by the country’s previous president Hamid Karzai, who accused the US last November of collaborating with the Deash terror group in his country.

The terrorist outfit began establishing a notable presence in Afghanistan almost a year after making sweeping land grabs in Iraq and Syria in 2014.

Accusing Washington of allowing Daesh to flourish inside Afghanistan, Karzai stated in an exclusive interview with Al Jazeera news network:

“In my view under the full presence, surveillance, military, political, intelligence, Daesh has emerged, and for two years the Afghan people came, cried loud about their suffering, of violations. Nothing was done.”

Karzai further stressed that the administration of US President Donald Trump used Daesh terrorism as an excuse to drop the massive GBU-43 bomb – the largest non-nuclear bomb used by the US military — on Afghanistan in April 2017, pointing out that “the next day, Daesh takes the next district in Afghanistan.”

“That proves to us that there is a hand in it and that hand can be no one else but them [the US] in Afghanistan,” said the former Afghan president who originally rose to power with Washington’s blessings.

The Russian Foreign Ministry official also reiterated that constant US claims against Russia were meant to conceal Washington’s own political-military failures across Afghanistan.

Zakharova emphasized that during the massive invasion of Afghanistan by NATO and American forces under the pretense of ‘war on terror,’ the country had become a focal point for the production and distribution of narcotics while the threat of terrorism was never eliminated in the war-ravaged nation.

A US-led military force invaded Afghanistan in 2001 as a response to the September 11, 2001 terrorist incidents in New York and Washington, vowing to oust the Taliban regime ruling over the country and bringing peace and stability to the nation.

The massive military occupation lasted until December 28, 2014, when the mostly Western military forces withdrew most of its troops and announced the conclusion of the combat mission.

In 2015, the US-led NATO initiated a new mission, code-named “Resolute Support,” which the announced objective of providing training assistance to Afghanistan’s security forces. Nevertheless, the still ongoing mission has failed to bring any sort of peace, security or stability to the Asian country.

This is while the Taliban and its newly-emerging terrorism rival, Daesh – which is gaining growing influence in Afghanistan with thousands of militant forces — continue to control more than half of Afghanistan’s territory, according to official figures.

Meanwhile, the Russian Foreign Ministry spokesman further blamed the unstable situation across the Middle East and North Africa, as well as a surge in international terrorism on “the NATO member states’ military gambles.”