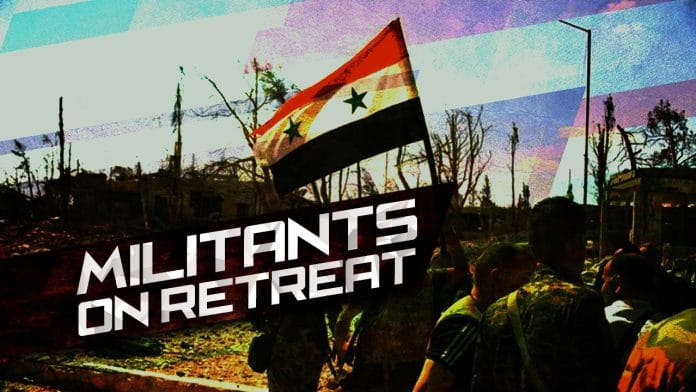 The Syrian Arab Army (SAA) and its allies have liberated the settlements of Al-Harra, Nimer, Umm al-Awsaj and the hills of Harra and Ahmar as well as some other points in the area north of Daraa city in southern Syria from Hayat Tahrir al-Sham (formerly Jabhat al-Nusra) and the Free Syrian Army (FSA).

The town of Nawa has remained one of the key militant defense points in the area east of the Golan Heights. Once it falls, the defense of militant groups will fully collapse.

Meanwhile, reports appeared that some FSA units in the area have requested a ceasefire and negotiations with the Syrian-Russian-Iranian alliance to reach a comprehensive reconciliation agreement. According to reports, a moderate part of the militants want to surrender their weapons and to settle their legal status with the Damascus government. However, agreement has not yet been reached.

On July 16, US President Donald Trump and his Russian counterpart Vladimir Putin held a face-to-face meeting in the Finnish capital of Helsinki. The situation in Syria was among the topics discussed by the leaders.

During a joint press conference after the meeting, Putin said that the key goal is to establish peace in the war-torn country and this effort could become an example of successful Russian-US cooperation. He emphasized the need to return displaced people to their homes and to improve the humanitarian situation.

In turn, Trump once again showed the key place of Israeli interests in his administration’s policy in the Middle East. He said that the US is closely coordinating with Israel and that “creating safety for Israel” is among the key goals of his country.

Regarding the situation in southern Syria, Putin said that following the defeat of the terrorists, the situation in the Golan Heights “must be brought into full compliance with the 1974 disengagement of forces agreement between Syria and Israel.”

The joint press conference showed that the sides may have found at least a partial understanding on the situation in southern Syria and may have set a foothold for reaching a comprehensive agreement on employing a political solution for the crisis in the war-torn country. However, only real steps from the sides can show how close this is to reality.

Meanwhile, the US-backed Syrian Democratic Forces (SDF) have resumed their advance on the ISIS-held town of Hajin in the Euphrates Valley. According to pro-Kurdish sources, the SDF has entered the town capturing some buildings inside it. Clashes are ongoing.