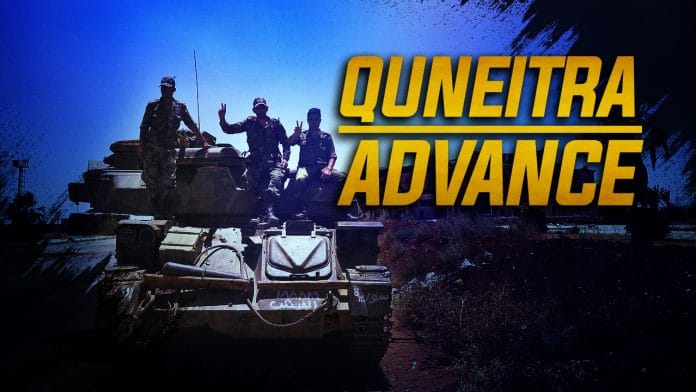 Militants are losing more and more areas in southern Syria to the advancing government troops.

Over the past day, units of the Syrian Arab Army (SAA), the National Defense Forces (NDF) and the Tiger Forces have restored control of al-Mal, Aqrabah, al-Alamiyah and the surrounding hills following a series of brief clashes with local militants.

The SAA and the NDF have also entered the villages of Nimer and Jasim where a local reconciliation agreement has been reached. The town of Nawa remains in the hands of Hayat Tahrir al-Sham (formerly Jabhat al-Nusra, the Syrian branch of al-Qaeda) and its allies. It’s the last real strongpoint of militants northwest of Daraa city.

The Syrian state-run media also declared that the towns of Busra al-Sham and Hirak are fully secured after militants had surrendered weapons there under the previously reached deal.

Summing up the recent developments in southern Syria it becomes clear that the Hayat Tahrir al-Sham-led opposition has already lost its battle against the SAA. The only local group, which is capable of fighting back the SAA militarily, is the Khalid ibn al-Walid Army, a local branch of ISIS.

100 Military Police servicemen have returned from Syria to the place of their permanent deployment in the Southern Military District, the Russian Defense Ministry announced on July 17. According to the ministry, 35 planes and helicopters as well as some aircraft maintenance personnel and medics have been withdrawn from the war-torn country.

According to CNN, the US, France, the UK and their allies are considering evacuating members of the White Helmets from the Syrian province of Idlib, which will soon remain the only place where Hayat Tahrir al-Sham retains control of some areas. According to CNN’s version of the events, the reason behind this possible move is a concern over the safety of the members of this well-known volunteer group.

On the other hand, Syrian activists point out that the US-led bloc may seek to hide details of the provocations, including staged chemical attacks, in which White Helments members were involved.

Hayat Tahrir al-Sham has recently vowed that the group and its allies are actively preparing to face the expected SAA operation in the province of Idlib, which is likely to be launched soon after the full defeat of militants in the provinces of Daraa and Quneitra.