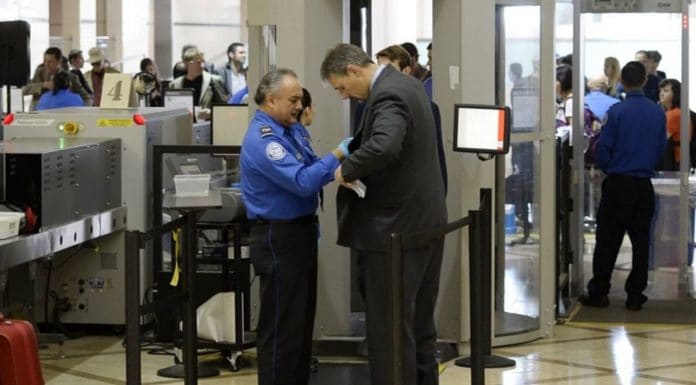 “Land of the Free and Home of the Brave” … we have all heard the words. Unfortunately, as I just discovered, they don´t mean anything anymore.

Once upon a time there was a First Amendment to the Constitution of the United States, the one about Freedom of Speech. Then there came the Fourth, which deals with being secure in your home and your papers. But when it comes to the bigger picture of things, neither apply anymore, at least in my case.

The Fourth Amendment is not just an idea. It states in black and white:

“The right of the people to be secure in their persons, houses, papers, and effects, against unreasonable searches and seizures, shall not be violated, and no Warrants shall issue, but upon probable cause, supported by Oath or affirmation, and particularly describing the place to be searched, and the persons or things to be seized.”

But it was adopted in 1792, long before the days of Homeland Security and the Patriot Act. All that stuff about Constitutional protections is now moot, a footnote in the story of when America was a free country.

On Friday the 13th, the date of my arrival back in the US after 15 years living in the former Soviet Republic of Georgia, two uniformed Homeland Security Agents, HLS, were waiting for me at the bottom of the airport escalator. They intercepted me before I even got to passport control. They took me away and put me at the head of the passport control line, to scan me back into the US quickly, or so I thought.

They waited with me while my checked baggage came off the conveyor belt, and used that time to start going through all the papers I had with me in my carryon bag. They also started checking the numbers in my cell phone, and asked me about the people behind the names and numbers.

Then the two agents searched my BIG checked bags, in the area set aside for travelers of “suspicious background or dodgy paperwork” – still not telling me exactly what they wanted. Only after this did they admit that they had been requested to question me on arrival in the US. When I asked why, I was told this access to this information was “higher than their pay grade.”

I mentioned the Bill of Rights, and how papers also have protection under that same Bill of Rights. I was told that no longer applied, as under the Patriot Act they have the right to search anything they want.

It was clear what was happening. I had expected the same on departure from Georgia the day before. The same thing had happened 15 years ago, when I was actually arrested getting off the plane on allegations of failure to appear for a domestic family court hearing. I was held on thirty-thousand-dollar bail, my US passport was later revoked and confiscated in Azerbaijan and my US nationality was cancelled, leaving me a stateless person in a foreign country, with no legal protection, liable to deportation or worse at any time.

It took me 14-years of hard fighting to get my passport and nationality back. Only when Trump became president did I become a full-fledged US citizen again. I felt this was especially harsh treatment for not showing up to a domestic relations hearing which I was notified of, by a court which knew I was out of the country.

I had also been subjected to special treatment on departure, at the Tbilisi airport in the Republic of Georgia the day before. I was told by the airport staff that they had been requested by Doha International, the transit airport, to carefully check my documents and inspect my luggage, as if I were a terrorist.

This order must have come from the US, as why would Doha be interested in my person? It raised the question, should I consider this a compliment or regard myself as being under real threat now?

It had taken one further hour in Tbilisi before being cleared to leave, and now I was enduring an additional two hours of questioning in the US. The HLS agents were even questioning me whilst I was waiting for my bags. I must have made bells toll for someone high up, simply by being out of the country for 15 years, or having written articles and given interviews about geopolitical issues.

Many of these pieces were especially critical of US foreign policy in the areas of the former USSR (Georgia and Ukraine) and the Middle East (Turkey, Syria, and Saudi Arabia). My argument was that the US should abide by its own Constitution, which it invented on its own volition, instead of violating it all over the place. Here was the US responding to these allegations by doing exactly what I was accusing it of doing.

Proof is the whole pudding

One of the documents which was copied was from a letter from a friend, Rumwold Leigh, which he had given to the US Embassy in July 2016. It described some of my treatment in recent years.

I freely gave them a copy and said, “you should make this part of my official dossier.” They undoubtedly will, because it summarizes all the evidence against them, and shows that third parties are also aware of it.

Here are some of the highlights, which explain why I think I received such special treatment on arrival in the country of my birth.

“During the time I have known Mr. Silverman [more than 10 years] he has been assaulted on several occasions by persons who can be shown to have connections with the US Embassy in Tbilisi, Georgia, and at least on one occasion was tortured by Georgian special services personnel with the full knowledge and participation of Embassy staff. The injuries resulting from these assaults are a matter of record. He has also had his US nationality revoked [for a period of 14 years] and been publicly vilified by the US Embassy in various press releases.

“All these abuses are undoubtedly linked to Mr. Silverman’s longstanding involvement in investigative journalism. He broke several stories about the illegal activities of the US and other Western governments in Georgia, which include training, funding and supplying arms to terrorists, manufacturing biological weapons and the torture, murder and false imprisonment of people who oppose these actions or get too close to them. He has also given a multitude of interviews concerning these matters, and has written a number of print articles about them, laden with hard evidence, which are widely republished in the electronic media.”

If the US government wanted to deny any of this – as it should, because it should be upholding the Constitution, right or wrong, and be seen to be doing so – it would treat me in exactly the opposite way whilst in the US or en route to it. Then it could say that it was not the US government but other people, foreigners with different values, who did these things.

Instead it proves itself guilty at every turn. Is this what my fellow Americans pay their taxes for it to do?

You can hear but can´t listen

The fact that I have been asked to give regular interviews, and the hard evidence which was presented to the present Georgian government about the many crimes committed by the previous one, should indicate that the substance of the stories the US objects to is merely a reflection of what ordinary Georgians know or suspect. This further magnifies what threat a journalist such as myself face from the very ones implicated by such work.

As one colleague in the Russian media wrote me recently, “I just don’t understand how Americans can tolerate all of this. Even if I was not a journalist, having more insight than others, I would not take the risk you did by travelling to the US. There are so many interesting things in the US, so many places to go, so much history, but authorities make it difficult for American citizens.

Russia has a long history of terrorist attacks, as you know from the links with Georgia, being committed on its territory. But it would never do the things that the US is doing with so-called security measures. Here people would never put up with such treatment, people would never tolerate such nonsense.”

I should feel so happy to be back home, and still wonder why some considered that America was threatened by my anticipated arrival. Few here are particularly interested in what their government does in this country or that, at least for as long as they can convince themselves they live in a country with manifestly superior values. If I set up a big screen in the local shopping mall and told them everything I know, it would be dismissed as the inevitable consequence of getting involved with these inferior foreigners, who must learn somehow, whatever methods are used.

But I am certain some higher ups in governments are very upset about my interviews with Russian and Ukrainian TV, and perhaps even my writing for USA Really. Reality has a way of biting people who don´t like it. Perhaps they want to bite me harder in the hope it will make that day never come.

Anyway, let me get back to doing the morning news and seeing how the media tries to bury what happens from day-to-day. It has become clear to everyone that spinning Trumps troubles into cheap scandals, and running it all over a cliff, is what the Trump and MSM controlled fake news is all about! I might even try and tell a few people what the connections are between all this and what the US does every day outside its borders. After all, they have finally decided I am a US citizen, and have a right to be in my own country, even if my other rights – the ones they hold so dear – are worth the proverbial bowl of cold spit.