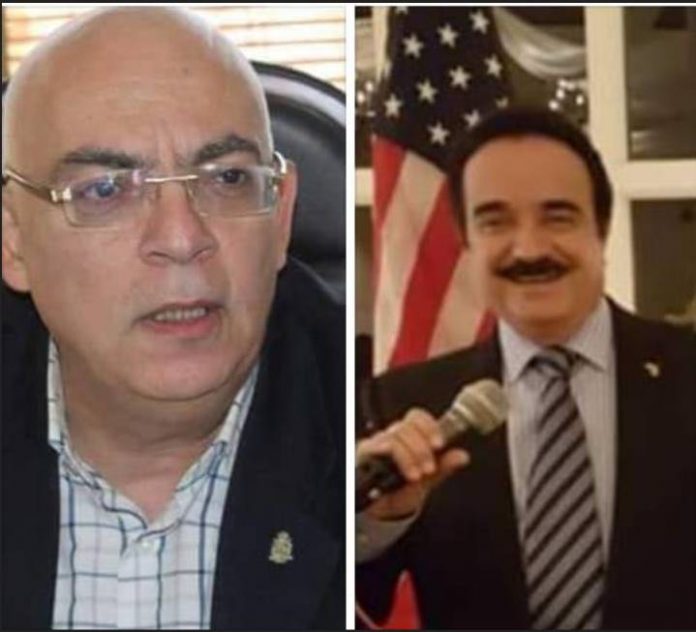 DESI secretary General Dr. Haissam Bu Said reviewed with Tony Brady Congressional advisor to Edmond Rice the Helsinki Summit, and the sharp controversy arising in the US after the historical meeting between the two world presidents Vladimir Putin and Donald Trump. Breidy is currently serving as the Director of the European Department for Security and Information (DESI) in the Department of State in Washington.

Breidy underscored that President Trump is “God’s gift to America, he sees the world as one family, living in peace and harmony, and America doesn’t need enemies with nuclear threats and terrorism, and far from having cronies in the bureaucracy, it is that very messy that Mr. Trump is trying to undo.”  “Trump’s predecessor, Obama, famously said that he didn’t need Congress because he had a “pen and a phone”. As the president stated Our relationship with Russia has NEVER been worse thanks to many years of U.S. foolishness and stupidity,” accordingly to Breidy.

Breidy said “we ended up with a stifling mass of regulations that damn near ruined the American economy, almost destroyed our industrial base and left us with $8 trillion in debt. Democratic rats either don’t understand the American electoral system or choose to ignore it just because they dislike and delegitimize Mr. Trump presidency.”
Breidy added “Both presidents talked about nuclear weapons, including the Intermediate-Range Nuclear Forces Treaty (INF) which covers short- and medium-range nuclear missiles, the 1987 treaty that banned all US and Russian ground-launched missiles of intermediate range – between 500 and 5,000km, and the chances of them signing an extension to the new Strategic Arms Reduction Treaty (START) are perhaps greater now than they were before the meeting.” “Yet it is hard to pinpoint a decisive change in American foreign policy that came out of the Helsinki meeting. What it offered instead was a reaffirmation of things that America already knew about its president. Mr. Trump thinks that the world benefits when America and Russia have close relations,” Breidy retorted. Far from expressing Happiness that the two leaders of two very important countries are continuing to meet, Breidy said “If that meeting takes place in Washington, I think it is all to the good. Those conversations are incredibly important.”

Regarding Syria, Breidy said “Trump is willing to help with the reconstruction of Syria; something the EU has insisted must be conditional on a wider peace agreement.”  Trump set no condition, saying: “If we can do something to help the people of Syria get back into some form of shelter and on a humanitarian basis … I think that both of us would be very interested in doing that and we are. We will do that.”

According to Breidy, “Putin did suggest he might be willing to merge the Astana talks – Iran, Russia, and Syria – with the so-called small group – France, Britain, Germany, Jordan, the US and Saudi Arabia – The two leaders also are expected to discuss a tentative deal to move Iranian troops farther from Israel’s border with Syria and Jordan, in exchange for allowing access there to Syrian President Bashar al-Assad’s forces. Proposal that would keep Iranian forces in Syria 27 miles from the Israeli border.”
Breidy hailed the return of the Syrian refugees to their country and the Syrian president’s efforts to confront the conspiracy that has been waged against the people, the government and the Syrian solid system, which “was restored thanks to a solid vision and determination not to over-the unity of the country despite all the pressures exerted by the obscurantist forces under the umbrella of the Arab Spring, which pooched to demonize and crash the Syrian president where he managed to get out of that plot well.”

In his turn, Ambassador Abu Said stressed the importance of the work carried out by Advisor Breidy in the heart of the international storm, pointing out that the European Department of Security and Information always seeks to correct the political loopholes on wars in the world with the faithful and supporters of peace and the preservation of international laws. Dr. Abu Said concluded that what is happening in some Arab countries of conspiracies in the name of the Arab Spring is the implementation of the “Yinon” Zionist plan, which works to fragment the region and the entire world so that the Zionist control remains a pioneer. Ambassador Bu Saeed stressed support for all efforts in support of this approach, which tries to convey the voice of truth from the American interior and to spread the peaceful human endeavor from any reliable source