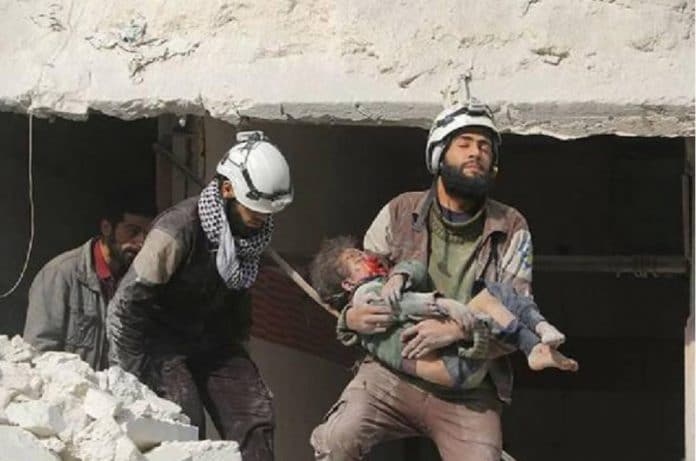 Editor’s note:  The lucky kids get candy or, more often potato chips (crisps for you Limey’s among us).  Some kids get a shovel in the head and others a dose of chlorine bleach in the face.

Then they are paraded in front of the cameras, including Reuters and al Jazeera and it all goes to Donald Trump, the one man audience that launched a thousand dead kids

The culprits?  Yes, we are talking George Clooney’s White Helmets.  From Pravda:

The Israeli military evacuated the creative wing of terrorists fighting in Syria. White Helmets are known for their fake reports about chemical attacks in the war-torn country, but now White Helmets are safe, spokesman for Israel’s Ministry for Foreign Affairs, Emmanuel Nachshon, happily said. Needless to say, the United States was the first country to welcome Israel’s initiative. In fact, it was the USA that requested the evacuation of “creative terrorists” from Syria. Israeli Prime Minister Benjamin Netanyahu said that the lives of members of White Helmets were in danger, so he allowed them to travel through Israel to a third country as a “humanitarian gesture.”

One is left to wonder about the reaction of those, who lost their loved ones because of the attacks conducted by representatives of such humanitarian organizations, who bomb buses, synagogues and stab people in broad daylight.

White Helmets will now be able to please other countries with their videos too. The Israeli administration may not even seem to bother much about the number of makeshift bombs and missiles that fall in residential quarters of Israeli towns. The Israeli prime minister may also suffer from the shortage of chlorine in daily news reports.

The USA, Canada, France and a number of other European states asked to save their protégés. Of course, officials with the Israeli leadership know whom they are evacuating.

Perhaps, the Israelis concluded a “very good deal” with someone. They know what consequences of dealing with terrorists may be. Anyone can come now to Israel under the guise of virtual humanists.

Russia may not agree with Israel in its approach to the definition of terrorist organizations. Israel may consider certain groups as terrorist organizations, but Russia may disagree. In the past, however, Israel used to consider terrorists in the Northern Caucasus and their guests from Arab countries as “rebels.” In other words, those terrorists were freedom fighters for Israel, even though they had to behead people on the way to future prosperity.

In the context of the above-mentioned humanitarian gesture, assumptions of Israel’s participation in the training of Syrian terrorists looks different. White Helmets may take their “show” to Jordan and then to the streets of European cities. It seems that Israel is known what it is doing. Israel’s compassion for terrorists may reduce the level of sympathy to the country should tragic news come from Israel again. Of course, we never want any tragedy to happen anywhere, but Israel’s humanism smells blood, TNT and chlorine.