The Rothschilds can never stop getting caught with their pants down. The only way they will stop their covert activities is if the authorities start putting them behind bars. It has recently been reported that

“According to the regulator, both Rothschild Bank AG and Rothschild Trust AG failed to check where assets from a client came from. The firms reportedly disregarded signs that the funds could be connected to money-laundering and took the money anyway. The companies run by the Rothschild family are also accused of reporting on the issue too late.”[1]

Obviously that is not a surprise at all, particularly when we look at the Rothschild family and their covert activities throughout history. Keep in mind that One of the “industrial forces” that controlled the financial world in the eighteenth and nineteenth centuries was none other than the Rothschild family.

This was even admitted by socialist historian Gustavus Myers, who wrote in The History of the Great American Fortunes that “under the surface, the Rothschilds long had a powerful influence in dictating American financial laws. The law records show that they were the power in the old Bank of the United States.”[2]

Mooney write that “the Rothschild family stands out in history as the prime example of manipulating the power of international banking… By means of usury on international scale, they were able to consolidate great wealth and power to turn world affairs according to their own fancy.”[3] The Rothschilds financed wars in England and America, collecting huge interest rates and making a massive profit. 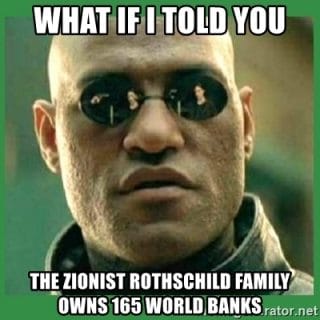 Jewish historian Esther Benbassa has similar views.[5] She states that “the Rothschilds were Scottish Rite Masons,”[6] but saw Freemasonry as a noble and tolerant religious organization that had welcomed Jews.[7]

Yet, far from being a benign organization, Freemasonry was anti-Christian from the start and sought to dethrone Christianity—even through revolution. Starting with its rituals of initiation, Freemasonry finds itself in complete contradiction to the teachings of Christianity. Freemasonry is a secret society and its doctrines are antithetical to the Bible.

Philo-Semitic historian Niall Ferguson declared that Nathan Rothschild “was able to become the principal conduit of money from the British government to the continental battlefields on which the fate of Europe was decided in 1814 and 1815.”[8] Nathan, according to Ferguson, “became the master of the bond market” and “the master of European politics” during the Napoleonic war.[9] By the nineteenth century, Nathan established “the biggest bank in the world.”[10] An American magazine complained in the 1830s that “not a cabinet moves without [the Rothschilds’] advice. They stretch their hand, with equal ease, from Petersburg to Vienna, from Vienna to Paris, from Paris to London, from London to Washington.”[11]

The Rothschilds, in relation with the Rockefeller Foundation, were behind the “fiat money and inflationist policy of the early New Deal.”[12] (As of 2012, the Rothschilds again attempted to merge British and French banking operations in order to gain more control.

David de Rothschild declared that the new system would “better meet the requirements of globalization in general and in our competitive environment in particular, while ensuring my family’s control over the long term.”[13])

Ferguson, of course, does not attribute this to usury but to “sheer good luck,”[14] something that is hardly rational; Sachar does the same thing. While Ferguson documents the fact that a century before the Rothschilds came onto the scene Sephardic Jews in places like Lisbon, Toulouse, Bordeaux, Antwerp, and London were deeply involved in the banking system, and admits that the Rothschilds “dominated the Jewish social and communal pyramid,”[15] he says nothing about usurious contracts.

Sachar only gives us the example of Joseph Suss Oppenheimer, a Jewish financier and banker who “exploited his connections with such imagination and ruthlessness that he obtained almost complete control of the duchy’s financial administration. In that capacity, Suss did not hesitate to pocket substantial bribes from businessmen in return for government contracts.”[16] In the end, Sachar attributed it to anti-Semitism. We find similar methodology in Benbassa’s work.[17]

There were other voices, however, who thought the Rothschilds were up to something. In 1828, Thomas Dunscombe declared, “Master of unbounded wealth, [Nathan] boasts that he is the arbiter of peace and war, and that the credit of nations depends upon his nod; his correspondence are innumerable; his couriers outrun those of sovereign princes, and…ministers of state are in his pay.”[18]

Henry Clews, the American financier who wrote Twenty-Eight Years in Wall Street in 1888, declared that the Rothschilds were making a fortune in America through German banker August Schonberg, who changed his name to Belmont when he came to the United States.[19] Clews states that through his “avariciousness” and “penuriousness,” Nathan Rothschild in particular would “manipulate the market.”[20]

Carroll Quigley claimed that the Rothschilds, among other bankers, were secretly misleading governments and people; he says that Mirabaud and the Rothschilds became the dominant financial system between 1871 and 1900. British economist J. A. Hobson declared in 1902 that nothing could be pursued “by any European state…if the house of Rothschild…set their face against it.”[21]

The Rothschilds ended up making a fortune during the Napoleonic Wars.[22] Austrian-born Jewish writer Frederic Morton (born Fritz Mandelbaum) declared that the Rothschilds “conquered the world more thoroughly, more cunningly, and much more lastingly than all the Caesars before or all the Hitlers after them.”[23]

Morton’s assertion is corroborated by biographer Derek Wilson, who declared that the Rothschilds were so financially and politically powerful that even royal governments and political leaders were afraid of them.[24] Their influence was so covert that Wilson moves on to say that

“clandestinity was and remained a feature of Rothschild political activity…Yet all the while they were helping to shape the major events of the day: by granting or withholding funds; by providing statesmen with an unofficial diplomatic service; by influencing appointments to high office; and by an almost daily intercourse with the great decision makers.”[25]

Wilson later argued that their clandestine ways were justifiable since they feared that they would be misrepresented by the press; whether Wilson is right is hard to justify. But the Rothschilds made an enormous profit from the Napoleonic wars; after the dust settled, the Rothschilds “emerged from the war as millionaires and celebrities.”[26] One of the Rothschilds, Nathan, “was widely believed to have made extortionate profit from official contracts.”[27]

Karl Marx explained what he thought was the root cause of self-deception in his essay “On the Jewish Question.” “What is the secular basis of Judaism?” he asked. “Practical need, self-interest. What is the worldly religion of the Jew? Huckstering. What is his worldly God? Money…We recognize in Judaism, therefore, a general anti-social element of the present time…In the final analysis, the emancipation of the Jews is the emancipation of mankind from Judaism.”[28]

The Rothschilds and the Khazarian Bankster Cult need to give up their diabolical activity and embrace Logos in all of its manifestation. The world will be a better place when they finally surrender to Logos.