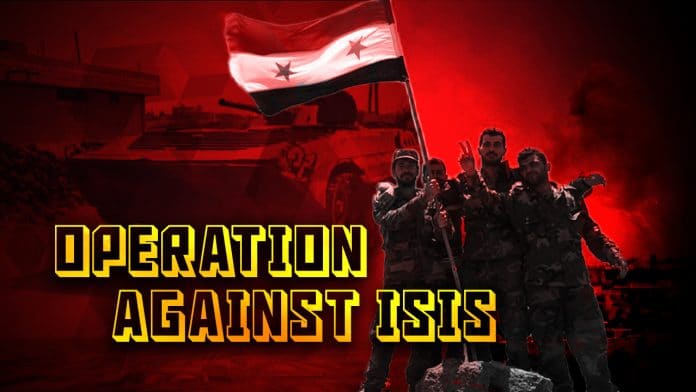 On July 23, the Syrian Arab Army (SAA) and its allies kicked off a military operation to defeat ISIS terrorists in southern Syria, east of the Israeli-occupied Golan Heights.

Government forces liberated the villages of Ma’alaqah and Um Lawqas as well as some nearby hills in the northern part of the ISIS-held pocket.

On July 24, the SAA-led force continued its advance aiming to capture the town of Tasil and the nearby villages of Saudah, Ain Thakar and Adawan. The general goal of the effort is to shorten the frontline against ISIS. This will allow the SAA to focus their main efforts on more fortified areas located in the central and southern parts of the pocket.

Separately, the SAA retook a post of the United Nations Disengagement Observer Force (UNDOF) at the village of Al-Rafeed. Thus, the only areas de-facto controlled by members of the Free Syrian Army and Hayat Tahrir al-Sham east of the Golan Heights are Baqira, Beerajam, Quneitra and Jubata al-Kashab.

On July 23, the Israeli Defense Forces (IDF) employed David’s Sling aerial defense systems against rockets launched near the Syrian-Israeli contact line. According to the IDF, Israel launched two interceptors. It is unclear if the interceptors hit any target. However, the IDF says that there were no injuries or damage from the rockets, which had been launched during fighting between the SAA and militants.

It is interesting to note that the Israeli Air Force carried out no airstrikes on Syria in response to this incident, something unexpected considering the general attitude of Tel Aviv to the conflict.

Later on the same day, Russian Foreign Minister Sergey Lavrov and the chief of the military’s General Staff General Valery Gerasimov held talks in Jerusalem with Israeli Prime Minister Benjamin Netanyahu. After the meeting the Russian Foreign Ministry said that during the talks “the parties tackled various aspects of the Middle Eastern agenda, attaching primary significance to the situation in Syria and its vicinity.”

Netanyahu discussed the situation in Syria with Russian President Vladimir Putin in Moscow two weeks ago. The intensified contacts between the sides is another signal that southern Syria will soon be returned to the full control of the Assad government allied with Iran and Tel Aviv has no realistic options to prevent this. The 1974 Agreement on Disengagement between Israel and Syria will be a basis to de-escalate, at least partly, tensions between Damascus and Tel Aviv.

The Russian Centre for the Reception, Allocation and Accommodation of Refugees in Syria has prepared more than 336,000 places to accommodate returning refugees and temporarily displaced people in Syria. The places are located in the provinces of Aleppo, Rif Damashq, Homs, Hama and Deir Ezzor.

The Russian military says that a total of 1.7m refugees may return to Syria from Lebanon, Turkey, Jordan, Iraq, Egypt and various European countries. The Russians are actively assisting the Damascus government to prepare for this.

83 medical facilities, 213 educational institutions, 73 power stations, 69 water supply facilities and 2 fuel and energy facilities as well as 244km of roads have been restored with the help of Russia.