I’ve worked on the hill and not all Republicans are like this.  Only half, maybe a little more.

Watch the video and, if you are GOP, you have voted for something like this because you were gullible.

Then again, if you voted GOP, this might well be you.  Welcome to smackdown city.

One might ask why Sacha Cohen, an admitted Zionist, to an extent anyway, would engage in a broad takedown of the Israel lobby in the US through its moronic affiliation with the SPLC and other fake organizations.

Behind this, a far darker side, is what is behind the fake elite management of the fearful and stupid of America through control of the media including and especially fake wars like the Trump/FakeCNN war.

Both are owned by the same people pictured here: (photo from Russia/banned by Google)

Cohen, a British comedian (who can actually be funny) has yet to go after Israel in his war on hypocrisy. We expect he will eventually be there as what we saw depicted above is pretty commonplace in Israel.

Going after rednecks, his main target, is like shooting fish in a barrel. It takes more power and influence to survive targeting the real assholes of the world and Cohen may well have the chutzpah to take it on. 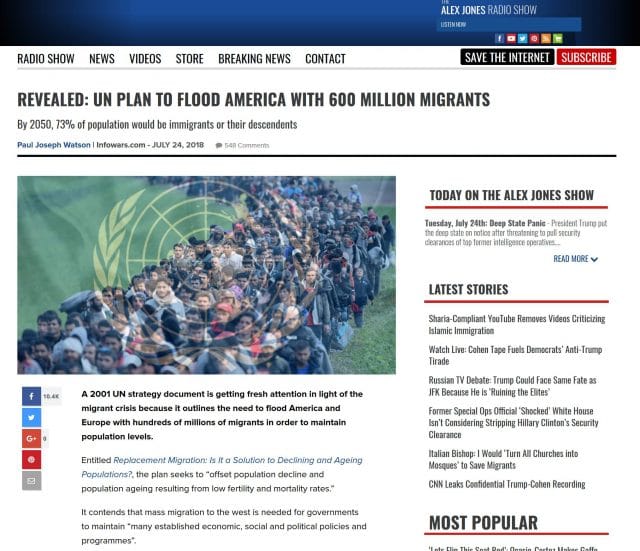 Only a few short years ago, they were the headliners of the Russia bashing brigade, with Alex Jones warning us of Russian troops “on our soil,” tens of thousands of them, secretly “sapping our vital bodily fluids” or something like that anyway. At one point InfoWars claimed 60,000 Nigerian troops were stationed in South Carolina as part of a UN plot to put all real Americans into prison camps, trainloads of guillotines, huge mass graves, pedophiles in pizza restaurants, secret mail servers and former Navy seals being garroted by chubby ex first ladies.

This is the heart of what now can be branded as “Hannity reality,” a mix of fear mongering from nearly every direction, primarily aimed at African Americans and Hispanics, pulling together America’s mentally ill into just enough of a voting bloc to hide rigged elections. Then there’s Maxine Waters, a California rep who has fought CIA drug dealing, utility bill ripoffs and hypocrisy for 3 decades.  She is the enemy of the fake elites, the primary enemy, and the subject of “ape-ification” by the Fox boys and their DC think tank, all mob owned and funded, that keeps White America proud, fat and using methamphetamine.

Then we have this one, a photo of Michelle Obama with her mouth photoshopped at the Jamestown Foundation of all places, in a troll room there paid to produce black propaganda. 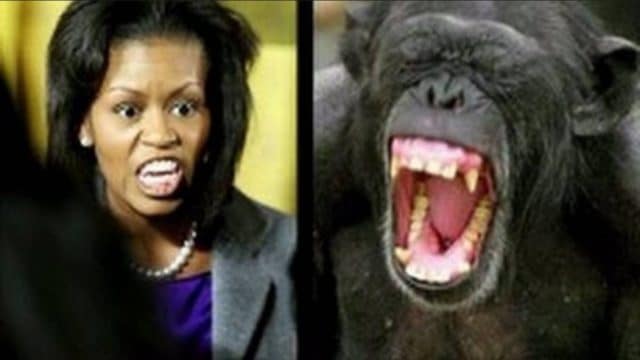 Do we have to remind readers that the National Rifle Association was just busted for laundering $21 million of Russian cash into the American election?

Do you think anyone had to threaten a pimp to keep an American first lady from being tossed out of the US.  We now revoke citizenship for anyone who has told a lie on their application.  Do we have a first lady whose background has even a slight problem?

How many people have been killed to hide her past?

Then we had Mrs W.  The scandal there was simple high school gossip where a young lady discovering her lesbian identity was going to be outed by a nasty young man.  Someone ran him over with a car.  Look it up.

Then again, W was a total idiot, dumber than Trump by inches, gay as a pink frock but well liked, funny, high or drunk much of the time and only moderately psychopathic.

With media controlled, social media in particular, as VT has long proven just with how we have been targeted alone, how do you think you get the information you think you have if not from criminals paid by criminals to play you like a $5 dollar fiddle?