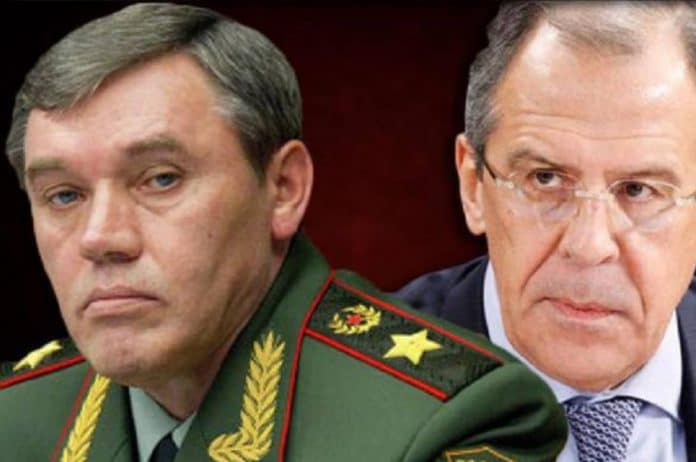 Never before had Russian Foreign Minister Sergei Lavrov and Chief of Staff of the Russian Armed Forced Valery Gerasimov traveled on a joint tour abroad. Obviously, these two officials play the role of “messengers” who clarify certain issues for Putin-Trump meetings. Yet, why does Gerasimov need to attend meetings in Berlin and Paris, if Germany and France play a secondary military role in Syria?

This week, Russian Foreign Minister Sergei Lavrov and Chief of Staff of the Russian Armed Forced Valery Gerasimov paid visits to Israeli Prime Minister Benjamin Netanyahu in Tel Aviv and then went to Berlin and Paris, where they had meetings with German Chancellor Angela Merkel and French President Francois Macron. Judging by brief reports in the press, the officials discussed the state of affairs in Syria and the regulation of the crisis in Ukraine.

Israeli Defense Minister Avigdor Lieberman was present at the meeting with Benjamin Netanyahu on Monday, July 23. Immediately afterwards, Netanyahu talked to Vladimir Putin on the phone. Russia has fulfilled its promise to guarantee the presence of the Syrian army in the south, on the border with Israel, pushing Iranian forces away from it. In turn, the US accepted the idea of Bashar Assad keeping his office. Iran earlier said that it could consider withdrawing troops if Russia could guarantee its interests.

What kind of interests are they? Bashar Assad keeps his office and remains an ally in the region.  Weapons supplies to Hezbollah via the territory of Syria will have to be frozen.

Israel’s recent evacuation of White Helmets from Syria shows that the agreements are being implemented. Even the Syrian military aircraft that Israel shot down on Tuesday, July 24, did not trigger anything big. Former Iranian ambassador to Damascus and adviser to Iranian foreign minister Hussein Sheikh al-Islam said that Russia should not interfere in Syria’s internal affairs. “The Syrian government is the only party that has the right to decide who will stay in Syria, and who will leave it,” the Iranian official said. Most likely, it was not only the Iranian position that the official voiced.

What was the need for Mr. Gerasimov, the Chief of Staff of the Russian Armed Forces, to be present at all those meetings? Paris and Berlin play a secondary, one can say a humanitarian role in the Syrian conflict. It was reported that Russia and France launched a joint humanitarian operation in Syria’s liberated south. But what does Mr. Gerasimov have in common with it?

Yet, Berlin and Paris are directly responsible for the rise of fascist regime to power in Ukraine. They are also responsible for the anti-Russian hysteria in Europe. Russia held the FIFA World Cup and could now have a frank explanation with European leaders about its stance on Ukraine. Russia’s position on the crisis in Ukraine has changed. Suffice it to recall Putin’s recent proposal to hold a referendum in the Donbass. This is where Mr. Gerasimov could come in handy to talk about the red line that Ukraine has crossed in the Sea of Azov.

Earlier, Putin warned that the exacerbation of the crisis in the Donbass could lead to serious consequences for Ukraine’s statehood. It appears that the General Staff of the Russian Armed Forces already has a plan of action at this point. It appears that this plan takes into account Ukraine’s possible move to launch a military operation against the Donbass either at its own will or by instructions from the deep state.

The above-mentioned meetings, held at Putin’s request, looked like a message from Putin to Merkel and Macron: “Talk to Gerasimov, if Lavrov doesn’t sound convincing for you.”