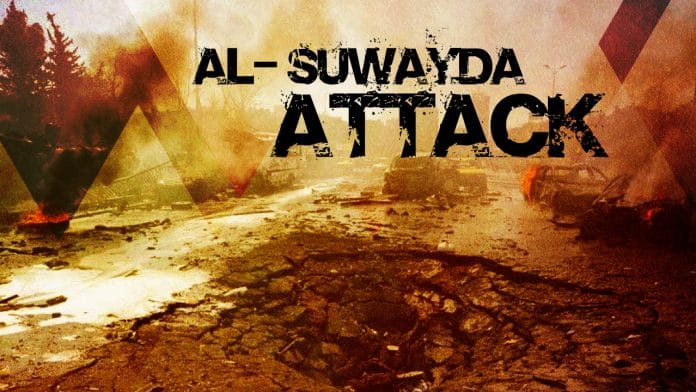 On July 25, ISIS carried out a large-scale attack on positions of the Syrian Arab Army (SAA) and the local National Defense Forces (NDF) in the province of al-Suwayda. ISIS employed at least six suicide bombers in the city of al-Suwayda and temporarily captured the villages of Shbeiki, Shureihi, Rami and Duma. The SAA and the NDF killed two suicide bombers, captured one and retook the villages after a few hours of clashes. In these clashes, at least 15 ISIS members were killed.

However, the ISIS attack resulted in multiple civilian casualties. According to local sources, up to 150 civilians were killed and an unknown number was injured.

The ISIS attack in al-Suwayda shows that a large-scale operation against ISIS cells still operating in desert areas in central Syria is something urgently needed to keep security in the formally liberated areas.

On July 25, the remaining members of the Free Syrian Army (FSA) in the province of Quneitra started handing over their weapons to the SAA. So far, they have surrendered a BMP-1 infantry fighting vehicle, an AMB-S armored ambulance, a modified Grad multiple rocket launcher, a D-30 122-mm towed howitzer and a RG-31 Nyala mine-resistant ambush protected vehicle.

As soon as militants hand over their heavy and medium weapons, they will get a chance to withdraw towards the militant-held part of Idlib and Aleppo provinces or to settle their legal status with the Damasucs government. Thus, the entire area which used to be controlled by the FSA and Hayat Tahrir al-Sham in southern Syria will be liberated by the SAA.

At the same time, the SAA regained the villages of Sayda al-Golan, Khan Sayda, al-Luwbayd, al-Muqaziz and a housing complex near the town of Jillen from ISIS, east of the Golan Heights. The advance was supported by multiple airstrikes by Russian and Syrian warplanes.

The ISIS-linked news agency Amaq claimed that an ISIS suicide vehicle-borne improvised explosive device (SVBIED) targeted a position of the SAA around Jillen killing and injuring dozens of pro-government fighters. However, no photos or videos were released to confirm the claimed number of casualties.

On the same day, the Israeli Defense Forces (IDF) carried out another round of strikes in southern Syria after two rockets launched during clashes between ISIS and the SAA fell somewhere in the occupied Golan Heights.

An IDF aircraft destroyed a rocket launcher and the IDF artillery struck the area where it was deployed. According to some reports, the rocket launcher was belonging to ISIS. This was one of the very rare examples when Israel struck ISIS targets east of the Golan Heights.

Meanwhile, the US-backed Syrian Democratic Forces (SDF) advanced 35km deep inside the valley of Rauda in the eastern Deir Ezzor countryside. According to pro-Kurdish sources, the SDF operation against ISIS cells in the area is coordinated with the Iraqi military.