Today’s False Flag Weekly News (watch it above, click HERE for links to stories we covered) featured guest commentator Greg Felton, a former MSM journalist who took the red pill, started telling the truth about Israel, and “never worked in this town again.”

The most darkly hilarious story this week was Sacha Baron Cohen’s exposé of how easy it is to mind-control American politicians—all you have to do is speak in a thick Israeli accent. No matter what you tell them to do, no matter how insane, they just mindlessly do it. Watching Cohen punk Jason Spencer, you are seeing EXACTLY how Israelis punked Dick Cheney and got the green light for 9/11. The only difference is that they aren’t releasing the Cheney video any time soon.

Is Sacha Baron Cohen’s intention to expose the truth? Or is he partaking in “duper’s delight,” laughing along with Bibi and the Israelis at the stupid American goyim?

No wonder Zionist assets of all stripes are working to censor and suppress the alternative media:

*FaceBook is being pressured to ban or suppress truth tellers

*Wikpedia’s “guerrilla editors” are at war with truth

Meanwhile, Trump looks to be just as punked as Jason Spencer as he bends over for Bibi and tweets insane threats at Iran.

Is Trump really a potential force for 9/11 truth, as Robert David Steele thinks? I think Steele’s assessment is exceedingly optimistic. But I do hope I’m wrong.

If you appreciate this level of truth-telling, please support us while we’re still legal! 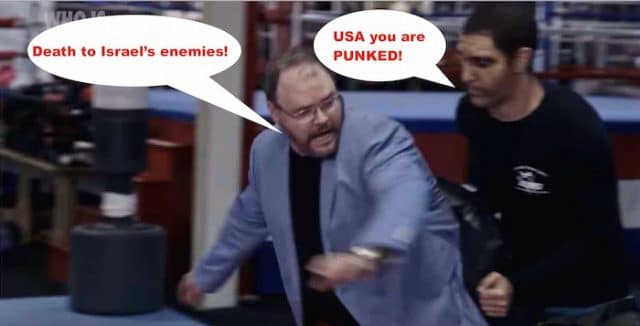