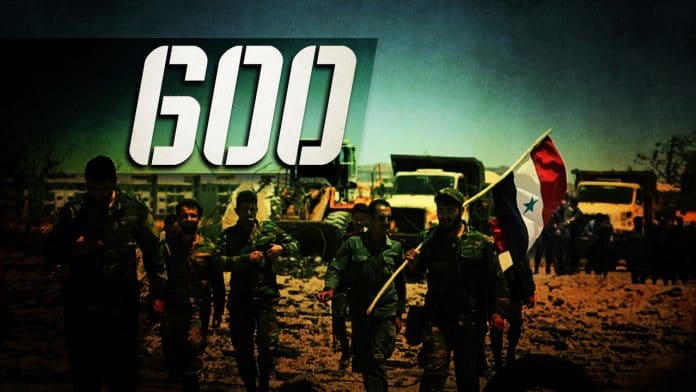 ISIS is on the verge of full collapse in southern Syria. Over the past few days, the Syrian Arab Army (SAA) led by the 4th Armoured Division and the Tiger Forces, have liberated over 30 villages and settlements from the terrorist group in the area west of Daraa city.

Government troops have liberated the towns of Saham al-Jawlan, Tasil, Hayt and Adwan, the villages of al-Jumou and Maziraa as well as multiple nearby points. Then, they also advanced in the direction of al-Shajara, which is one of the few remaining ISIS strong points.
A source in the 4th Armoured Division told SouthFront that over 600 ISIS members have been eliminated by the SAA, backed up by the Russian Aerospace Forces, since the start of the operation in the ISIS-held pocket.

75 ISIS members have been killed in the recent clashes between the SAA and ISIS in eastern al-Suwayda, according to the province’s governor Amer al-Ashi. He added that many civilians are still missing following the large-scale ISIS attack. According to the updated data, the civilian death toll as a result of the July 25 incident has grown to 215.

Hayyat Tahrir Ahrar al-Sham, Jabhat Tahrir Suriya, Suqour al-Sham and Faylaq al-Sham agreed to set up joint operational headquarters to prepare an attack on government forces positions in the Idlib de-escalation zone, the Russian Center for Reconciliation of the Warring Parties in Syria says. According to the Center, the attack may be carried out “simultaneously in several directions – the mountains of northern Latakia, al-Ghab valley on the border of Hama and Idlib provinces and areas west of Aleppo”.

According to Syrian sources, up to 6,000 members of militant groups could be involved in the expected attack. The Russian side is also expecting new provocations involving chlorine and other poisoning substances in the case of renewed clashes between the SAA and the militants.

On July 26, Aldar Khalil, co-president of the executive body of the Movement for a Democratic Society (TEV-DEM), told the Kurdish Rudaw TV that Kurdish forces in northeastern Syria are ready to participate in any military operation of the SAA in the province of Idlib if this brings them closer to retaking the Kurdish area of Afrin from Turkey-led forces.

TEV-DEM is a coalition of several Kurdish parties in northeastern Syria, including the well-known Democratic Union Party (PYD). Together these parties lead the Syrian Democratic Council (SDC), which is the political wing of the US-backed Syrian Democratic Forces (SDF).

Khalil’s statement is another indication of the SDC’s attempts to improve relations with the Assad government, which have become complicated because of the tensions between Damascus and the US-led coalition.