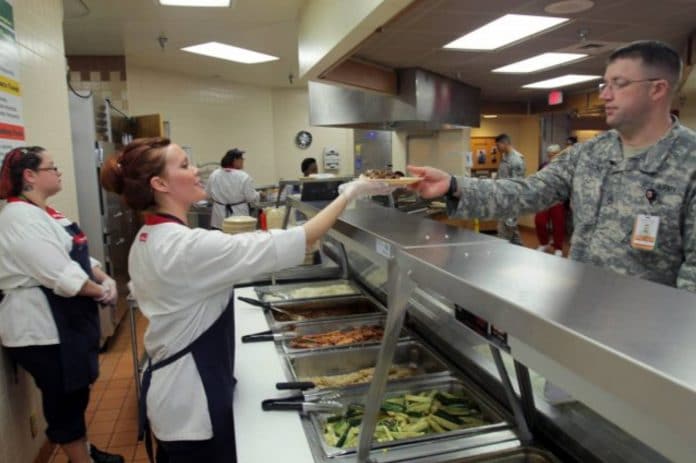 SAN DIEGO, July 31, 2018 /PRNewswire/ — A lawsuit was filed today in the Southern District Court of California against Sodexo Inc. on behalf of Illinois resident, Vincent Grano who developed an E. coli O157:H7 infection from food served at the cafeteria and mess hall at a Marine Corps Recruit Depot in San Diego. Sodexo, a Delaware company, provides food and facility management services for the United States Marine Corps Depot in San Diego. Mr. Grano is represented by Marler Clark, the food safety law firm, and Gordon and Holmes, a local San Diego firm.

“I want to make clear that this is not a claim against the Marine Corps,” said Bill Marler, managing partner at Marler Clark.  “We intend to hold Sodexo and the supplier of the tainted meat responsible for the devastating injuries caused to Mr. Grano and the other young service members who have contacted us,” added Marler.

On August 7, 2017, Mr. Grano reported for recruit training at MCRD in San Diego, California. During the ten-day period before his symptoms began, Mr. Grano exclusively consumed food provided by Sodexo, Inc. On October 23, 2017, the day before he was to begin the final training challenge of boot camp, called “The Crucible,” at Camp Pendleton, Mr. Grano began to experience symptoms of stomach cramps, nausea, diarrhea, and vomiting. Three days later, Mr. Grano informed his senior drill instructor that his diarrhea had turned bloody and was subsequently taken to the emergency room by paramedics. He was discharged the same day.

On October 29, Mr. Grano lost consciousness and was hospitalized at Balboa Naval Medical Center. While hospitalized, he tested positive for E. coli O157:H7 and diagnosed with hemolytic uremic syndrome (HUS), acute kidney failure. Over the next month, Mr. Grano underwent numerous procedures and tests at Balboa. His HUS condition resulted in dialysis and central nervous system involvement characterized by the sudden onset of seizures.

The Marine Corps San Diego and Camp Pendleton E. coli O157:H7 outbreak was reported in a CDC report by Amelia Keaton. In total, there were 62 confirmed cases, 62 probable, and 120 suspected cases. 30 people were hospitalized and 15 were diagnosed with HUS. Consumption of undercooked beef was found to be the probable cause of the outbreak.

Marler Clark, The Food Safety Law Firm, is the nation’s leading law firm representing victims of E. coli outbreaks and hemolytic uremic syndrome (HUS). The E. coli lawyers of Marler Clark have represented thousands of victims of E. coli and other foodborne illness infections and have recovered over $650 million for clients. Marler Clark is the only law firm in the nation with a practice focused exclusively on foodborne illness litigation.  Our E. coli lawyers have litigated E. coli and HUS cases stemming from outbreaks traced to ground beef, raw milk, lettuce, spinach, sprouts, and other food products.  We have proudly represented such victims as Brianne Kiner, Stephanie Smith and Linda Rivera.