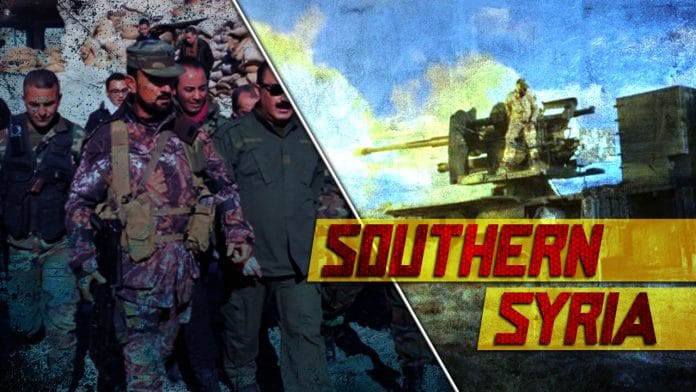 ISIS members retreated from the town of Shajarah and the villages of As`arah and Ma`rabah east of the Golan Heights under pressure from Syrian government forces. Thus, the terrorist group remained in control of only 3 villages in the area.

According to pro-government sources, there are less than 200 ISIS members hiding in Kuwayyah, Beit Arah and Qusayr. With the liberation of these villages, the Syrian Arab Army (SAA) will be able to declare full control of the contact line with the Israeli-held area, and southern Syria in general.

The key problem of the advance in the Yarmouk valley is that an unknown number of ISIS fighters and ISIS-linked individuals are hiding among civilians in the recently liberated areas. Without additional security measures, these persons will be a source of constant threat of terrorist attacks.

The same problem is currently observed in eastern al-Suwayda where the SAA and security forces have failed to eliminate all ISIS cells thus facing repeated attacks. The most notable such incident took place on July 25 and resulted in the killing of at least 255 people and the injuring of about 180 others.

Civilians are leaving the militant-held part of Idlib province via a humanitarian corridor in the Abu al-Duhur settlement, Russia’s Center for the Reception, Allocation and Accommodation of Refugees said.

According to the head of the Center’s Aleppo Province Department Oleg Demyanenko, all the fleeing persons are checked via Syrian databases to see whether they have any problems with the law. They are also checked for weapons and explosives. Some people have reportedly tried to smuggle fire arms.

Hayat Tahrir al-Sham (formerly Jabhat al-Nusra, the Syrian branch of al-Qaeda) and other militant groups see the evacuation of civilians from the area under their control as a threat and a signal of the upcoming operation against them by the SAA.

The reason is that the evacuation of civilians is limiting the militants’ capabilities to use them as human shields.

The US-backed Syrian Democratic Forces (SDF) have captured 3,400km2 from ISIS near the Syrian-Iraqi border in the framework of their operation against the terrorist group’s cells in eastern Deir Ezzor and southern al-Hasakah.

Currently, the SDF is in the final stage of its operation against ISIS in the border area, according to pro-Kurdish sources. According to the SDF’s statements, ISIS cells remain only in the area of Rawdhah and Barghuth swamps.