The Daily Mail is just waking up from the fact that Israel, “a country born in bloodshed, has become the leader in assassinations.”[1] Taking its cues from Ronen Bergman’s Rise and Kill First: The Secret History of Israel’s Targeted Assassinations, the Daily Mail continues to say:

“Then they waited. Five hours later, news came. Fatkhi had wasted no time. He had gone straight to a police station and accused Mossad of trying to brainwash him. The operation was an abject failure.”[2] 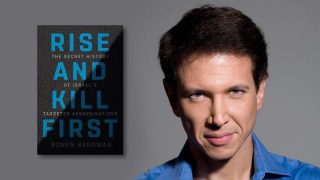 The Mossad, as we all know, has a history assassinating perceived enemies across the Middle East and even Europe. Not only that, the diabolical organization has a history of using anyone they think would give them a political leverage. You remember Otto Skorzeny? The Jewish Daily Forward tells us that he was “one of the Israeli spy agency’s most valuable assets” and

“was a former lieutenant colonel in Nazi Germany’s Waffen-SS and one of Adolf Hitler’s personal favorites among the party’s commando leaders. The Führer, in fact, awarded Skorzeny the army’s most prestigious medal, the Knight’s Cross of the Iron Cross, for leading the rescue operation that plucked his friend Benito Mussolini out from the hands of his captors.”[3]

The question then becomes: how far does Israel have to go in order to force its covert activities on virtually throughout the planet?[4] Yossi Melman, an intelligence and security columnist for the Israeli newspaper Maariv, and Dan Raviv, the Washington correspondent for i24News, tell us:

“It is striking that Israel does not try to deny that its agents trampled on the sovereignty and laws of many countries in search of justice against mass murderers.”[5]

Did you catch that? Israel will violate the laws of any country in order to get their dirty work done. The blatant contradiction is that Otto Skorzeny worked for the Mossad! Why didn’t they kill him? Why did they hire him as their hitman? And these people want us all to believe that they are fighting Nazis? There are some things that are so patently dumb that only the Mossad and Israeli officials will believe them.