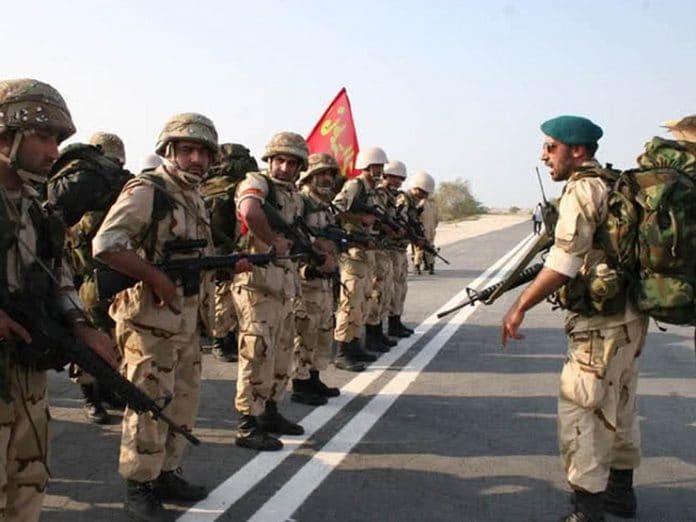 [ Editor’s note: Alexander Orlov gives us some background on a July meeting between an Israeli delegation and the Russians. Israel wants no Iranian military presence in Syria, and presented the biggest unlikely pie-in-the-sky proposal that Syria be allowed no long-range rockets and would close its rocket facilities.

As opposed to disarmament, Syria might be better served to consider giving the Iranian army dual citizenship. Turnabout is fair play, since Israel did a similar gesture for certain Americans decades ago and demonstrated what a powerful allegiance tool it can be, sort of like giving forty thousand people a key to the city, as it were. At this point, it might be worth looking into… Jim W. Dean ]

In Jerusalem on July 23, talks were held between Prime Minister Benjamin Netanyahu and a Russian delegation headed by Sergey Lavrov, the Foreign Minister and Valery Gerasimov, head of the General Staff of the armed forces.

On the Israeli side, the meeting was attended by Avigdor Lieberman, the Minister of Defense, Gadi Eizenkot, Chief of General Staff of the Israel Defense Forces, and Meir Ben-Shabbat, head of the National Security Council, along with other high-ranking Israeli officials.

A particular issue in the talks was the “Iranian problem” and the situation in Syria, especially in relation to the military presence in Syria of Iran, its Hezbollah Shi’ite allies, and Shi’ite armed volunteer formations from Iraq, Iran, Afghanistan and Pakistan. After the talks finished, the Israeli television channel Reshet 13 announced, citing a government source, that during the meeting Mr. Netanyahu had insisted that the Iranian and Hezbollah forces must be sent at least 100 km from the Israeli border.

According to Israeli TV’s Channel 10, Avigdor Lieberman, the Minister of Defense, and Gadi Eizenkot, the Chief of the General Staff, had provided the Russian delegation with proof of Iran’s presence in Syria, including maps and intelligence reports.

Russia’s Foreign Ministry commented on the meeting in Jerusalem:

“The problem of regulating the Israeli-Palestinian dispute was also touched on in the course of the talks between Vladimir Putin, the President of Russia, and Benjamin Netanyahu in Moscow on July 11. Among the issues discussed in detail were the termination of the anti-terrorist operations in the south of Syria, and how to ensure  security along the Israeli border, including the fulfillment of the 1974 Israel-Syria Separation of Forces Agreement.”

As early as the late evening of July 23, it was reported in the press that Israel had rejected Russia’s proposal for the creation of a 100 km-wide zone on the Syrian side of the Syrian-Israeli border, from which Iranian troops would be excluded. According to the newspaper in question, Israel rejected this suggestion and continued to demand that Iran be allowed no military presence in Syria at all.

Moreover, according to the Times of Israel, Israel also insists that no long-range rockets be based in Syria and that all rocket-producing facilities in the country be closed down. Admittedly, shortly afterwards it was announced that Israel had not rejected Moscow’s proposal to remove all Iranian forces to at least 100 km from the Syrian border with Israel.

So far, one thing is clear: what to do about Iran’s military presence is still an open question. And, as yet, no solution has been reached. At the very least, Israel has not accepted the options that have been proposed. And Iran has no intention of departing from Syria.

The problem is that it is impossible to resolve the issue of Iran’s, and its Shi’ite allies’, military presence in Syria without involving Teheran in the talks, given that such presence currently consists of at least 120 000 ground troops, military advisers, militants and volunteers. And their number is continually growing.

What is more, many of them are “reclaiming” the areas of Syria bordering on Iraq for permanent settlement there. Without their help, the Syrian government forces, together with the Russian military advisers and Russian army divisions troops based in Hmeimim, would be unable to bring about an end to the war in Syria.

The Iranian military advisers and special forces of the Islamic Revolutionary Guard Corps, as well as Hezbollah and the armed Shi’ite formations, frequently carry out most dangerous ground operations, in the course of which they suffer heavy losses. Therefore, however much time is spent discussing Israel’s concerns about the security of its northern border, a subject Donald Trump keeps on talking about, the reality is that there is currently no force that would be able to remove the Iranians from Syria or even force them to stay at least 100 km from the Israeli border. Damascus is certainly not going to do that.

Russia is also not likely to pick a fight with its partners in the anti-terrorist operation, and Israel simply cannot start a military operation against Iran and its proxy-forces on the ground in Syria and Lebanon. That would mean triggering a major war in the region, in which Egypt and the conservative Arabic monarchies of Arabia and Jordan would be forced to get involved.

After all, it is one matter to make a big fuss about the “Iranian threat”, and quite another to silently watch Jewish state attacking its Arab neighbour. Common Arabs will force their rulers to come to the aid of their Arab “brothers”, because if they don’t the new “Arab Spring” may sweep long rotten regimes which are propped up by US military might and by petrodollars. And then it will spread to Israel itself, surrounded as it is by hundreds of thousands of radical  Islamists, from the Moslem Brotherhood to the Al-Nusra Front, not to mention thousands of armed militants in Syria to the north, still not quite defeated by Damascus, and then, at home, the conflict with Hamas in the Gaza Strip could flare up…

And the Israeli army is no longer what it used to be.  Its failure in the 2006 war with Hezbollah made that very clear.

Now all the Israeli armed forces can do is launch ineffective rocket attacks on military targets in Syria, which are rebuffed by Syria’s increasingly powerful missile defense system. And the Israel Defense Forces are in no position to launch a ground-based operation. That would mean mobilising at least 150 000 soldiers, with armoured vehicles and artillery, and requiring them to enter Lebanon and Syria, where they would be met by now highly-experienced Iranian and Hezbollah troops, Shi’ite militants, Islamist radicals and terrorists of all allegiances, not to mention the Syrian army and thousands of volunteers from Arab and other Moslem states.

Over the last 10 years there has been a strong move towards pacifism in Israeli society, and it is not ready for a war – especially one that could result in hundreds, or even thousands of casualties. Clearly, Israel has long passed the point where it could fight another war like those of 1973, 1982 etc.

The USA is also not prepared to fight a war, especially now that arrangements are under way for the evacuation of US troops from the de-escalation zones in the south of Syria. To sum up, we can say with confidence that nobody is prepared to fight a major war in the Middle East.

Benjamin Netanyahu’s government therefore needs to reassess the situation and wake up to the realities of the twenty-first century. Today, Israel’s security is entirely dependent on its government’s readiness, not to dictate terms from a position of strength, but to negotiate and reach an agreement through diplomacy.

Foreign powers, even the USA, can no longer guarantee Israel’s security. And many people in Israel realise this.

Benjamin Netanyahu, however, is either living in an imaginary world, or he is bluffing. He wants to look strong, especially in view of the growing corruption scandal in Israel, in which he is involved. This time another war is no means to damp the scandal.

Israel needs to change its direction and recognize that other countries also have a right to live in peace and security. Giving up the occupied Golan Heights, resolving the Palestinian problem along the lines set out in the UN Security Council Resolution, and concluding peaceful agreements with all Arab nations: that would be the best possible guarantee of Israel’s security.