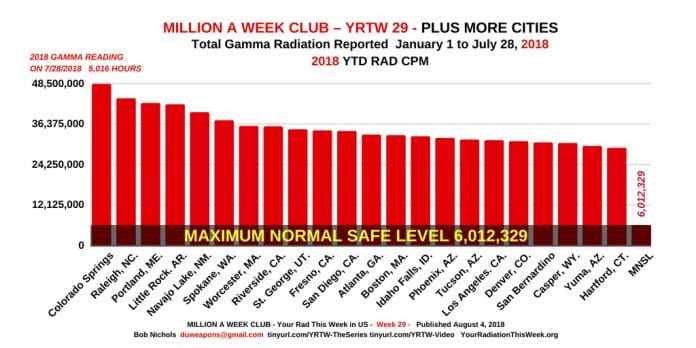 The nearby Targeted Population of US nuclear power plants is 160,876,377 people by the official 2010 US Census with a measured:

YTD is short for Year to Date. It means January 1 of the current year to today. CPM is short for Counts Per Minute.

Source RadNet Gamma radiation readings are taken hourly throughout the year. Radiation covers the US like a deadly blanket.

This is an increase in only a week that is way too high a price to pay.

Note: It is not really 11 years, just 9 years; Colorado Springs data was WITHHELD for 2006 and 2007, and continues to be WITHHELD by the PTB [Powers that Be].

I wonder what really happened around Colorado Springs in 2006 and 2007, don’t you?

The Total Gamma Rad in-country is going UP.

“This is a Bad situation for all who breathe,” states EU physicist Dr. Paolo Scampa.[5] Now included, for the 29th Week of 2018 just passed, all cities above 29 Million CPM [27] Year to Date [YTD] of deadly Gamma Radiation.

Tables of Poisoned American Cities
Million a Week and Total Gamma Radiation Reported in the USA – Week 29
January 1 to July 28, 2018
Published August 4, 2018
Gamma and Beta CPM by City and State in the US

Within minutes or hours of publishing this list of cities over 29 Million YTD Counts of Radiation, four more cities will Zoom past 29 Million Counts of deadly Gamma Radiation since January 1, 2018.

There were only three, maybe four, radioactive Isotopes in existence and they were mostly in the ground.

Cell assassins, like Plutonium 239, and its brothers were never around. That will be 27 cities above 29 Million Rad Counts so far this year.

SOURCEBob Nichols, author
ATTENTION READERS
Due to the nature of independent content, VT cannot guarantee content validity.
We ask you to Read Our Content Policy so a clear comprehension of VT's independent non-censored media is understood and given its proper place in the world of news, opinion and media.