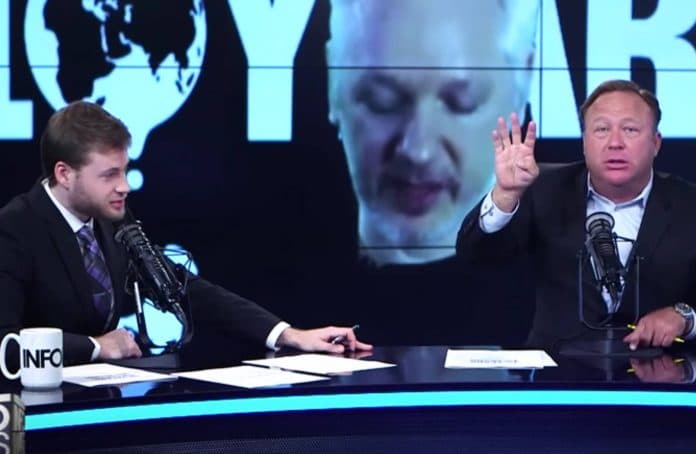 The single biggest censorship ban that covers all mainstream media and social media as well involves blocking all information tying Julian Assange and InfoWars to the Mossad.

Wikileaks and InfoWars are two major assets of the very real Deep State.  Before dishing out cash, sit back and watch them play their fake victimization into frontline prominence, better to do the bidding of the Deep State and its Tel Aviv based criminal empire.

Note:  When have Jones and Assange called out Israel?  Has Jones, as Fetzer has done, cited the Mossad as responsible for Sandy Hook?  Check it out.

Try linking this article on Facebook, see how you do.

This ban also includes the Russian media as well.

They have edited and censored any story on Assange or even Jones for years, removing any mention of ties to Mossad operations or the Bronfman crime family in Canada that, according to Jeff Rense, underwrites both.

When VT was totally banned on Facebook, you can’t even write “VT” without getting an error, Jones said nothing.  Assange knows us well also.  In fact, we were banned from YouTube for outing Julian Assange as an Israeli agent.

Google banned us long ago when we exposed Google Jigsaw/Idea Groups as a Pentagon/State Department “kinetic” (armed) contractor involved in regime change and blaming it all on “George Soros.”

It was VT that caught them all working with unnamed foreign intelligence agencies to rig the election for Trump.  We went to Hillary’s moronic campaign head and were later repeatedly questioned by the FBI.

Yet, when we go to the Russian press, we find some strange things.  We have long had mixed relations with Sputnik and Russia Today.

Though we are friends and generally in support of the same values, “generally,” we have on may occasions voiced our objection on their tendency to kiss Netanyahu’s behind and support his disinformation agents, such as Jones and Assange.

They also are increasingly becoming “tabloidized.”

It is clear to us, Russian security services are either compromised by Israel or have their own agenda.  I always assumed that Russia peddled the phony Assange the hero routine simple out of Russian stupidity.

When you really deal with Moscow and Washington, not the phony internet pundits, you find people there who pay no attention, have no access to intelligence or quality analysis nor would ever be trusted with same.

Intelligence personnel, real ones, not the CIA or FSB, phony organizations today, don’t talk to their governments.  It would be a waste of time.