Bryan MacDonald is an Irish journalist based in Russia.

An EU-sponsored report found that Georgia, not Russia, started the 2008 conflict, which kicked off after Tbilisi attacked South Ossetia. Nevertheless, much of the Western media and political classes hold Moscow responsible.
SOCHI – This week marks a decade since arguably the first social media war. It began when the Washington-backed former president of Georgia, Mikhail Saakashvili ordered an attack on South Ossetia – the region which had declared independence from Georgia in the early ’90s. 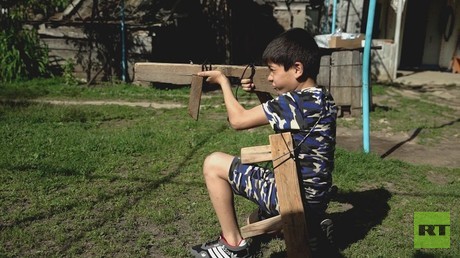 Russian peacekeeping troops had been stationed there since around 1,000 lives were lost in fighting between 1991 and 1992. That period had seen ethnic cleansing on both sides, with Georgians torching entire Ossetian villages and houses occupied by Georgians looted and burned down, according to Human Rights Watch.

At the time, the new social media platforms were generally regarded as harmless, fun and frivolous tools, with their downsides not really understood. And the initial reaction to the conflict echoed this perception. Indeed, a famous viral comment saw one user ask (with apologies to the English language): “I live in georegia but i dont see rusia no where not even sound but they says theres tanks should i be worrie.” At the same time, on Facebook, widely-shared posts saw amateur comedians wondering if they should flee Atlanta before the Russians arrived.

Though Mark Zuckerberg’s creation had been founded in 2004, it reached critical mass only a few years later, surging from 12 million to 100 million users in the 20 months from December 2006 to August 2008.This meant Facebook was too early for Iraq or Afghanistan but its potential to influence the narrative was clear by the time Saakashvili targeted his erstwhile province.

Despite an apparent Georgian belief that Russia wouldn’t deliver on its security responsibilities to South Ossetia, the Kremlin reacted swiftly. Yet, while it easily won on the battlefield, Moscow badly lost the “information war.” Very quickly, social media was dominated by assertions that the Russians had “invaded” Georgia, a mistruth amplified by the mainstream press, most of which still repeats the canard today. This, despite a 2009 European Union-sponsored report which clearly concluded that Tbilisi started the conflict.

READ MORE: 10 years since Georgia attacked South Ossetia and Russia – not the other way around

“In the Mission’s view, it was Georgia which triggered off the war when it attacked Tskhinvali (in South Ossetia) with heavy artillery on the night of 7 to 8 August 2008,” stated Heidi Tagliavini, who led the investigation.

While it criticized Moscow for sometimes going “far beyond the reasonable limits of defense,” the EU-backed team rubbished Saakashvili’s assertion that Tbilisi was pushing back against a Russian invasion, saying it found no evidence to support his allegations. Instead, the team confirmed that Russia’s counter strike was initially legal.

However, even a decade later, Russia’s intervention is misrepresented across the mainstream: with the aggressor/victim mix-up lingering. The EU report is seemingly regarded as inconvenient, at best.

Notably, when, this week, Salome Zurabishvili, likely to be endorsed as a presidential candidate by the ruling Georgian Dream party, admitted her country started the fighting, her comments were not even reported in English-language media.

On Tuesday the US Mission to the OSCE and the Danish Ministry of Foreign Affairs used their Twitter accounts to promote the “Russia invaded” Georgia yarn. Also, some individual journalists indulged in disinformation, notably including Simon Ostrovsky of Coda Story, which has some roots in Tbilisi.

This summer alone, the “Russia invaded Georgia” phantasm has been repeated in copious media outlets, including Foreign Policy, RFERL, Vox, The Spectator (UK), Politico, Newsweek, The Australian and Al Jazeera. And this is just a “small” sample garnered from a quick Google search.

Looking back, the 2008 conflict possibly marks the moment when the modern wave of “fake news,” amplified by social media, commenced. During the fighting, wire services such as Associated Press and Reuters were accused of distributing doctored and staged photos and videos which suited pro-Tbilisi propaganda. And Russia was slammed by Human Rights Watch for allegedly exaggerating the number of South Ossetian victims during Georgia’s attack.

Of course, television coverage became heavily slanted. For instance, RT discovered how CNN had tried to rebadge video footage of destruction in Tskhinval in South Ossetia (by Tbilisi forces) as wreckage from Gori, Georgia – thereby implying Russian, rather than Georgian responsibility. And newspapers didn’t cover themselves in glory either: the New York Times was labelled“Georgia’s public-relations conduit” by The Exile’s Mark Ames.

The events of August 2008 were a watershed, surely marking the moment Moscow lost any remaining illusions about the promise of objectivity and fairness in the West’s mainstream media. And, on the other hand, most Western outlets subsequently seemed to abandon even the presence of giving Russia a fair shake. And since then, it has been open season.