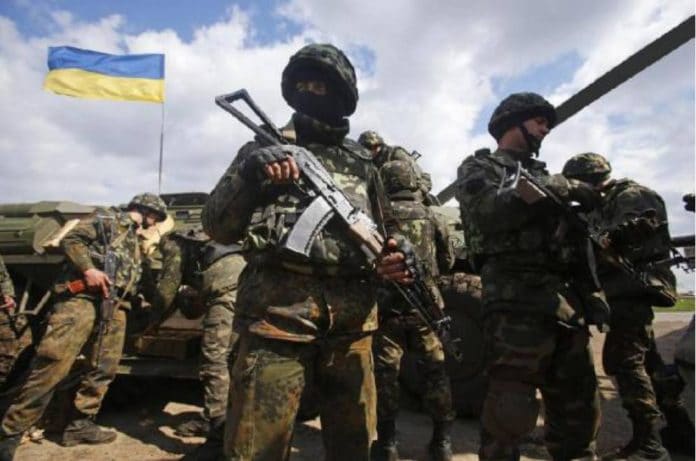 Petro Poroshenko ordered to draft a bill that would replace army greetings from Soviet-style “Greetings,  comrades!” to Bandera-style “Glory to Ukraine!” and “Glory to heroes!”

The bill is to be approved by the Ukrainian parliament, which currently remains in recess. The parliament is to reconvene on September 4. Nevertheless, Ukrainian Defense Minister Stepan Poltorak said that the new greetings would be used during the military parade on Independence Day in Kiev on August 24. This suggests that Ukraine lives under the rule of certain individuals, rather than law.

The aforementioned Bandera-style greeting used by Ukrainian nationalists – “Glory to Ukraine!” -originates from “Heil Hitler!”(“Glory to Hitler!”) and “Sieg Heil!” (“Glory to Victory!”) exclamations that Nazi soldiers used during WWII.  The “Glory to Ukraine!” exclamation was officially introduced at the II Congress of the OUN* party in Krakow in April 1941.

Of course, Ukrainian trolls try to find other roots for their Nazi greeting, Christian and even pre-Christian ones. Yet, Ukrainian soldiers will subconsciously associate the new army greetings with the “deeds” of Ukrainian SS divisions “Galicia” and “Nachtigall.”

The crimes of Ukrainian nationalists were legally proved and established at relevant litigations that also established their direct connection with Nazis. People in the whole world are familiar with the photo showing a fascist aiming his gun at a naked woman, who tries to cover her child with her body. The man in the picture, who is executing the woman and her child, wears a uniform of SS soldier, but he is not a German. He is a native of Western Ukraine. He had served in Galicia division, and had taken part in the work of punitive troops since 1943.

Poroshenko consistently pursues the policy to nazify Ukraine. The main message of this policy is as follows: it was not the Soviet Army, but the Ukrainian people and the Ukrainian insurgent army (Bandera supporters, UPA*) that liberated Ukraine from Nazism. How do common Ukrainians react to this?

Ukrainian boxer Oleksandr Usyk said: “If shouting “Glory to Ukraine!” could bring back peace to Ukraine, if it could raise people’s salaries and pensions, I would be shouting it 24/7.”

It appears that the Germans used to have the same feelings when Hitler came to power. We would like to hope that Ukraine does not become a prosperous country owing to a Nazi administration.

Here is what another person wrote on Facebook: “If you refuse to say “Glory to heroes” in response to “Glory to Ukraine” or if you do not know how to respond to this exclamation, just pretend that you are deaf, or they’ll shoot you, at least in your feet.”

Needless to say that the international community will not show any reaction to Ukraine’s decision to change army greetings from Soviet to Nazi ones. In Germany, however, it is considered criminal to say Nazi greetings. In Poland, Ukrainian Bandera-style exclamation is punishable by imprisonment. Yet, Brussels was OK with the anti-Russian Ukrainian slogan “Moskalyaku na gilyaku!” which literally translates as “Muscovites – on guillotines!”

The main principle of the European establishment today is as follows: the worse for Russia, the better. At the same time, Ukraine is striving with its fascist values to Europe. Who knows, maybe it will become a member of the European Union someday.

Ukrainian nationalists also use an anti-Jewish slogan – “Yude – get’!” (“Jews out!”), but Mr. Poroshenko enjoys respect in Israel. As for the “stronghold of democracy,” the United States, Washington shows strong resistance to the adoption of the anti-Nazi resolution that Russia and tens of other countries promote at the United Nations Organization. Ottawa and Kiev support Washington in this. After the Holocaust, Washington’s position on the topic should look wild and unacceptable for Israel, but Israel will never say goodbye to an annual aid of three billion dollars.

Psychiatrist and psychologist Alexander Fedorovich said in an interview with Pravda.Ru that Ukraine’s key national idea is the idea of nationalism. “It unites a fairly large group of people who are ready for extreme actions. Nationalism in Ukraine promotes ideas of chauvinism, fascism and anti-Semitism,” the expert told Pravda.Ru.

The first platform, where a national ideology should be realized, is a younger generation (kindergartens and schools). The next platform is the army. “If people have to go to kill other people, they should be ideologically zombified, because they should not think about anything else,” Alexander Fedorovich said in an interview with Pravda.Ru.

According to the psychologist, Ukraine did not have to reinvent the wheel – the country recreated the experience of Dr. Goebbels by inciting nationalist sentiments and making people believe in the superiority of their country over other nations.

“In the army, this greeting, which soldiers repeat throughout the day, becomes visceral. It requires no emotional coloring, and it zombifies people. They stop to reflect on the subject and take it for granted,” Alexander Fedorovich said in an interview with Pravda.Ru.