Alexandria Ocasio-Cortez is a young and fresh politician. We don’t know much about her yet, so we are not taking sides on what she fundamentally believes. But she has articulated a vitally important issue which the Khazarian Bankster Cult and the Zionist State have found offensive.

First of all, it must be said at the outset that the vast majority of Americans repudiated perpetual wars in the Middle East precisely because agents of perpetual wars are agents of chaos. These people don’t give a damn about you and decent Americans.

Moreover, these ethnic cleansers don’t give a damn about American soldiers, whose lives have been ontologically ruined by wars for Israel and the Neoconservative machine in America and England. It was reported in 2015 that at least 6,845 American soldiers died in Iraq, and

“1 million veterans injured from the fighting in Iraq and Afghanistan. All that can be said with any certainty is that as of last December more than 900,000 service men and women had been treated at Department of Veterans Affairs hospitals and clinics since returning from war zones in Iraq and Afghanistan, and that the monthly rate of new patients to these facilities as of the end of 2012 was around 10,000.”[1]

It has also been reported that “Afghanistan and Iraq veterans are ‘the most damaged generation ever.’”[2] Listen to this:

“More than half of the 2.6 million Americans dispatched to fight the wars in Iraq and Afghanistan struggle with physical or mental health problems stemming from their service, feel disconnected from civilian life and believe the government is failing to meet the needs of this generation’s veterans.”[3]

You can potentially build a country with 2.6 million people, and the wars in the Middle East have effectively destroyed the lives of at least 2.6 million Americans! So Ocasio-Cortez has taken a stand, one that is philosophically and politically defensible.

“Alexandria Ocasio-Cortez argued Wednesday that Congress seems to have no money when it comes to paying for ‘Medicare for all’ but plenty to support ‘unlimited war’ and tax cuts for billionaires.

“In an impassioned interview with Chris Cuomo, the Democratic congressional candidate said people are too heavily focused on ‘the sticker shock of Medicare for all but we do not talk about the sticker shock of our existing system.’ Health care for everyone in this country ‘is not a pipe dream. Every other developed nation does this ― why can’t America?’”

Ocasio-Cortez continues to damage the war machine and indirectly the Neocons by saying that the Republican Party, which never ceases to kowtow to the Israeli regime, always has enough funding for wars but zero dollars for decent Americans. Ocasio-Cortez said:

“When it comes to tax cuts for billionaires and when it comes to unlimited war, we seem to be able to invent that money very easily. To me, it belies a lack of moral priorities that people have right now, especially the Republican Party.”

Ocasio-Cortez has courage here. We may disagree with her on many other issues, but she is right on target when she attacked the war machine, the banksters, and the political swindlers. She moved on to say:

Ben Shapiro, the Jewish Neocon who once declared that the Trotskyist group The Pussy Riots were freedom fighters in Russia, challenged Ocasio-Cortez on a debate. He said: “Miss Ocasio-Cortez, I’m really excited that you’ve been elevated to that position and I would love to have a real conversation with you about the issues. You’ve noted that you think Republicans are afraid to debate you or talk to you or discuss the issues with you.”

Ocasio-Cortez should accept the challenge, bring all the facts with her, and politically decapitate the so-called “provocative gladiator” and “trash talker”[4] Shapiro. For example, she should bring the fact that it was the war in Iraq that gave us all an unwanted six-trillion-dollar bill.[5] It was the same war that took the lives of multiplied-million of Americans and decent Iraqis all over the Middle East. And it was Jonah Goldberg who diabolically declared that the Iraq war itself was “a worthy mistake.”[6] 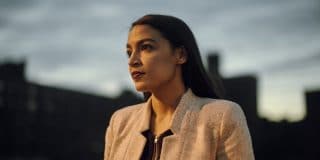 Moreover, Ocasio-Cortez should lay out the economic map and point out just what six trillion dollars could buy. Let’s answer this very question indirectly. What could you do with just 14 trillion dollars? Get this:

So Ocasio-Cortez is right on target when it comes to perpetual wars. If I had a dialogue with Ocasio-Cortez, I would have told her that the issue is not capitalism vs. socialism; the issue, as E. Michael Jones scholarly documents in his magnum opus Barren Metal: A History of Capitalism as the Conflict Between Labor and Usury, is between the workers (who have relentlessly been cheated out of their labor) and the usurers (who always destroy economic progress by cheating the workers of their labor). Marxism or Socialism is a reaction to capitalism, and those systems are economically and historically dangerous.[9]

But one should give credit where credit is due: Ocasio-Cortez, like Tulsi Gabbord, has essentially grabbed the war machine and ethnic cleansers in the Middle East by the balls and shown that the emperor simply has no clothes.