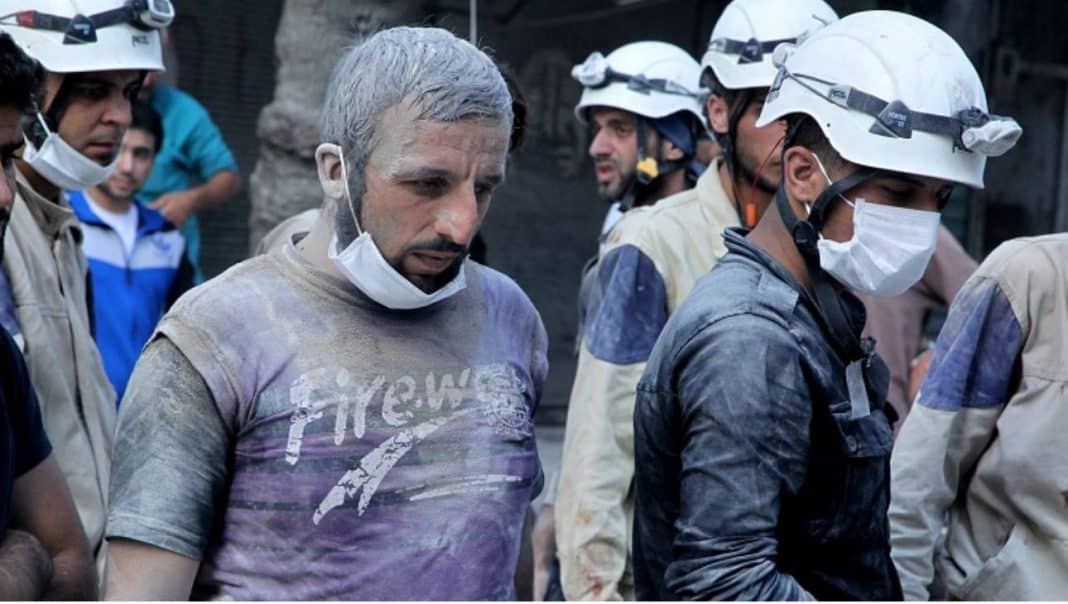 Refugees are beginning to return to Syria as the Damascus government clears out the last of the terrorists from all but Idlib Province. There, al Qaeda and the White Helmets are still active, holding a civilian population in terror, rounding up political prisoners, executing hundreds and planning more chemical attacks so that President Trump will protect their reign of terror.

Few are aware to what extent the American military, the highest paid in the world, was decimated during the contrived War on Terror. Hundreds of thousands were maimed, more wasted away in endless “deployments” while tens of thousands killed themselves.

Pentagon funds are better spent on missiles, aircraft carriers, and mercenaries while Washington political insiders rake off billions in graft.

War had to change, false flag terror, fake aid and refugee groups, fake news and standoff missile attacks while sanctions, blockades and assassinations took their toll. Key to America’s war, or perhaps more appropriately, the war America is fighting on behalf of globalist interests, is a group known as the “White Helmets.”

A Syrian child, living under ISIS terror, is dragged off the street. Bleach is poured on his head by, of all things, a fake first responder wearing a strange white bicycle helmet. His parents are terrified, other children kidnapped in a similar war are found dead, mutilated after being hacked and bashed, then dragged around repeatedly before video teams from Reuters and Aljazeera, fake atrocity victims to justify American military action against Syria.

The child is then dragged into a local hospital where a doctor, held at gunpoint, pretends to examine the terrified child while filming goes on.

Sometimes the filmed victims are paid, even filmed coming back to life, other times real Sarin gas is used, smuggled into Syria from Georgia and Ukraine, according to Serena Shim of Press TV, by mercenaries working for Google Idea Groups, a US State Department contractor.

Ensuing chemical weapons investigators find themselves followed, their families threatened and risk financial ruin and smears of any imaginable kind, in particular, being arrested with child pornography placed on their computers.

Protecting the White Helmets, a terror organization now spreading around the world, the story we will be telling here, is what President Trump calls the “fake media.” Behind it all, of course, is Donald Trump himself and Benjamin Netanyahu.

For weeks now, counter-terrorism organizations around the world have been engaged in efforts to identify members of an organization celebrated by Hollywood as among the most honored and revered of our time. We are, of course, speaking of the White Helmets, accused by Russia, Syria, Iran, Turkey, and independent investigators and journalists as a terrorist organization, the “Propaganda Ministry” for both ISIS and al Qaeda.

Time and time again, slam dunk proof has been submitted to the UN, the ICC at The Hague and to world media that this organization has committed unspeakable atrocities and its membership is a revolving door of terrorist leaders, crisis actors and Western paid propagandists.

Evacuated by Israel for Reassignment as “Terror Cells”

On July 22, 2018, the Associated Press published the following story about the alleged rescue of a very controversial organization known as the White Helmets. The story itself is beyond understanding, a travesty of falsehood, fakery and fabrication, a narrative that defies imagination.

BEIRUT (AP) — The Israeli military in coordination with its U.S. and European allies evacuated hundreds of Syrian rescue workers known as the White Helmets from near its volatile frontier with Syria, in a complex and first-of-a-kind operation.

The evacuees, who were hemmed in from one side by advancing hostile Syrian troops and from another by militants affiliated with the Islamic State group, were transported to Jordan, from where they are expected to be resettled in Europe and Canada in the coming weeks.

Jordanian Foreign Minister Ayman Safadi said Sunday that 422 White Helmets volunteers were evacuated, instead of the initial 800 cleared for the operation.

Israel’s military said the overnight operation was “an exceptional humanitarian gesture” at the request of the United States and European allies due to an “immediate threat to the (Syrians) lives.” It posted a video online showing its soldiers handing out water bottles to the evacuees.

“These are people who saved lives and whose lives are now in danger. I authorized bringing them through Israel to other countries as an important humanitarian gesture,” Netanyahu said.

The U.S. State Department welcomed the rescue of “these brave volunteers” and cited the United Nations, Israel, and Jordan for helping with the operation.

The statement from spokeswoman Heather Nauert also called on Syria’s government and its ally Russia “to abide by their commitments, end the violence, and protect all Syrian civilians, including humanitarians such as the White Helmets, in areas formerly part of the southwest de-escalation zone and throughout Syria.”

The “evacuation” of the White Helmets is part of a larger program of building and organizing a blend of terror groups like the Gulanites that threaten Turkey, the newly deployed ISIS sent to Afghanistan by the CIA or the MEK, a bizarre terror cult the US has deployed against the people of Iran.

Decades ago it was the “contras” and the death squads that killed tens of thousands in El Salvador and up to 300,000 in Guatemala.

Coming to Your Neighborhood

Not all terrorists will continue their Saudi paid and American supported wars in the Middle East and South Asia. In order to foster compliance on the part of NATO and other governments, domestic false-flag terror attacks, even in the United States such as those that occurred on September 11, 2001, must continue.

The targets, Canada, Britain, France, Germany, and Italy will be foremost on the list with Iran blamed, of course. Such attacks are under planning right now, and the perpetrators who used to be smuggled through Kosovo into Italy and north, are now being flown into Europe and North America as “heroes.”

Normally heroes receive medals, awards, and parades but these heroes, the White Helmets, arrive by the dark of night with fake identities and fat checks from spy agencies. Their “heroic” efforts aren’t over, there are more children to kill, more chemical attacks to stage, more death, more deceit, more false flag terror and a war on Iran to bring to fruition.