A Californian court has found chemical giant Monsanto’s weedkiller caused a 46-year-old man’s terminal cancer and ordered the company to pay almost US$290 million in compensation, in a landmark ruling which could open the door to thousands of similar cases being brought the world over. For the company’s critics, the news is a long-time coming.

The jury found the firm failed to warn clients about cancer risks associated with the product’s main ingredient, glyphosate, and Judge Suzanne Ramos Bolanos ruled the company “acted with malice, oppression or fraud and should be punished”.

The 46-year-old plaintiff, DeWayne Johnson, came in contact with the substance for years as a school groundkeeper, using up hundreds of gallons at a time. He was diagnosed with non-Hodgkin’s lymphoma in 2014, a cancer affecting white blood cells, a year prior to World Health Organization concluding glyphosate was probably carcinogenic. At least 220 other actions are currently ongoing against the company in San Francisco alone, brought by similarly affected individuals.

The hazardous potential of glyphosate was well known to Monsanto, but the company went to significant efforts to suppress and/or distort its lethal potential. In 2017, it was revealed the European Food Safety Authority’s (EFSA) finding two years earlier that Roundup, glyphosate’s trade name, was safe to use was based on scientific papers heavily influenced by the company. In one instance, a paper was even written by company staff outright, and published under academics’ names.

Monsanto’s Roundup weedkiller atomizers are displayed for sale at a garden shop at Bonneuil-Sur-Marne near Paris, France, June 16, 2015.

The revelation emerged from hundreds of internal Monsanto emails released by a US court. In a February 2015 missive, then-Head of Product Safety at the firm William Heydens proposed in-house scientists write a study, and independent academics “edit and sign their names” to the document without disclosing Monsanto’s involvement, an approach he dubbed “ghostwriting”. Subsequent communications indicate it was not the first time the firm had employed the tactic, saying it was “how we handled Williams Kroes & Munro“. Claiming authorship for work done by others is a serious ethical breach in the academic community, as is not disclosing conflicts of interest.

In another, Monsanto toxicologist Donna Farmer says “you cannot say Roundup does not cause cancer” — and a separate glyphosate study was also “redesigned” with the help of company scientists, in order to create a more favorable outcome.

Both studies were used in 2015 by EFSA when it evaluated the safety of glyphosate as part of the chemical’s licence renewal process — the body concluded there was insufficient evidence glyphosate caused cancer in humans, and the chemical lacked the mechanism capable of damaging DNA in living cells and subsequent cancer in humans.

Plaintiff Dewayne Johnson reacts after hearing the verdict in his case against Monsanto at the Superior Court of California in San Francisco on Friday, Aug. 10, 2018. A San Francisco jury on Friday ordered agribusiness giant Monsanto to pay $289 million to the former school groundskeeper dying of cancer, saying the company’s popular Roundup weed killer contributed to his disease

The email trove indicates the studies influenced by Monsanto deliberately ignored and downplayed glyphosate’s deleterious health implications — even staff were compelled to concede the papers “stretched the limits of credibility”. Despite this, the company paid independent toxicology consultant Dr. David Kirkland to attach his name to one of the papers to boost its legitimacy.As a result of the disclosure, Monsanto lobbyists were banned from entering European parliament, with company officials precluded from meeting MEPs, attending committee meetings or using digital resources on parliament premises in Brussels or Strasbourg.

In a sense, it’s perhaps unsurprising Monsanto products have such a devastating impact on human health. The company was a leading provider of ‘Agent Orange’ to the US government, a ‘defoliant’ widely used by US forces during the Vietnam war as a highly destructive chemical weapon.

While its primary purpose was theoretically strategic deforestation, the destruction of jungle cover and food resources necessary for the  sustainability of North Vietnamese forces’ guerilla campaigns, Agent Orange’s hazardous implications for human health were well known.

A napalm strike erupts in a fireball near U.S. troops on patrol in South Vietnam, 1966 during the Vietnam War

Subsequent scientific research has made clear the agent’s carcinogenic nature, with even passive contact with the chemical producing devastating repercussions not merely for the individual in question, but those they come into subsequent contact with, and their offspring. A 2002 study of dioxin levels in the city of Bien Hoa, a city in southern Vietnam located near an air base used for spray missions, indicated noticeably elevated blood dioxin levels three-decades after hostilities ceased, with Agent Orange specifically found in blood samples — even those sourced from post-war emigrants to the city.Moreover, Agent Orange is intimately connected to birth defects, with several meta-analyses of contemporary studies concluding there is a statistically significant correlation between an individual being exposed to Agent Orange at any point in their life, and their likelihood of either possessing or acting as a genetic carrier of birth defects. 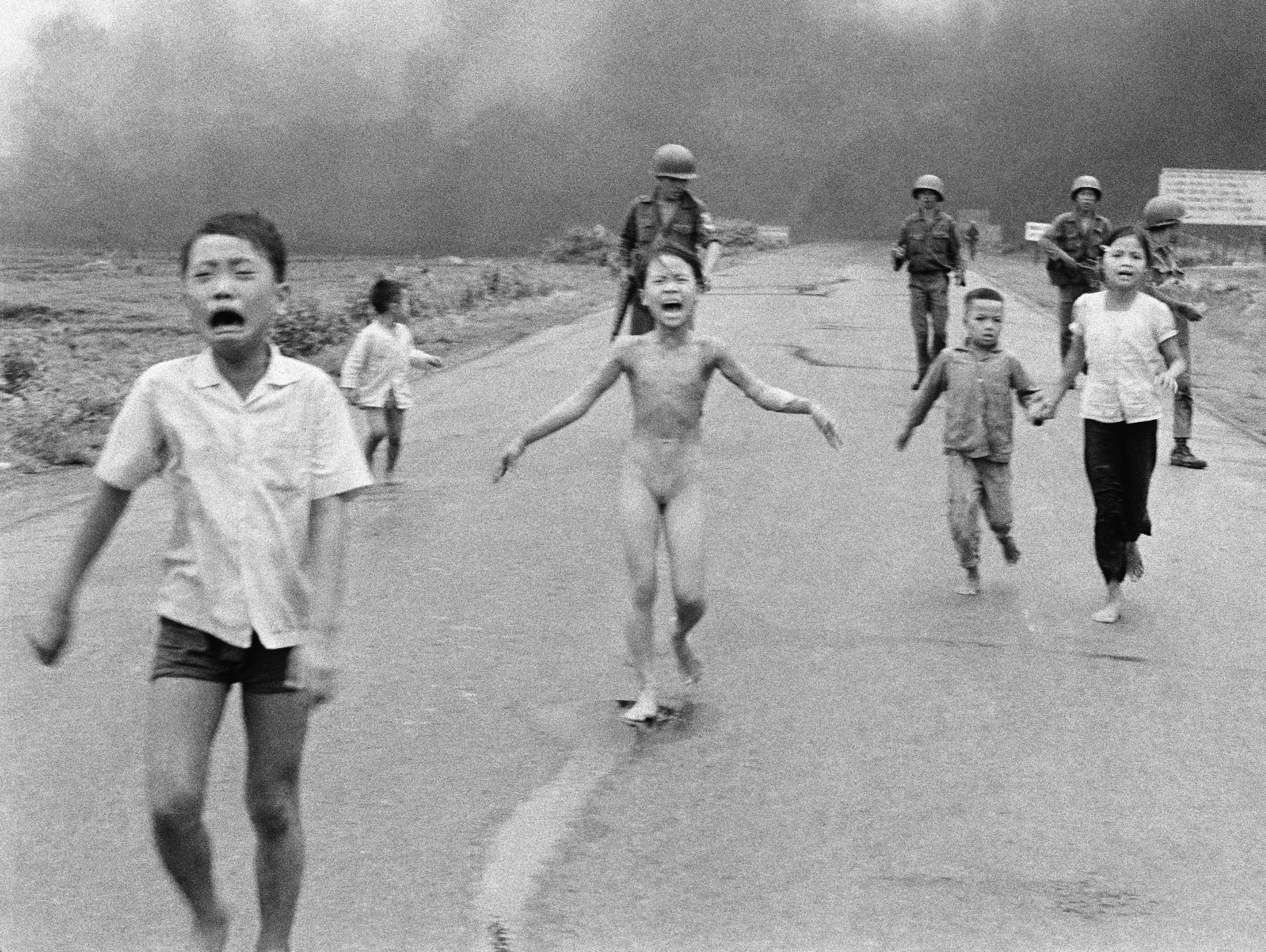 This is a June 8, 1972 file photo of South Vietnamese forces follow after terrified children, including 9-year-old Kim Phuc, center, as they run down Route 1 near Trang Bang after an aerial napalm attack on suspected Viet Cong hiding places

Monsanto’s prevalence in chemical warfare persists to this day, with the company providing the US — and thus Israel — with white phosphorous. The chemical weapon is extremely lethal, igniting upon contact with skin and burning until it runs out of fuel, or is cut off from oxygen. If inhaled or swallowed it can cause severe damage to mucous membranes with which it comes into contact.Moreover, absorption through skin means even a 10 percent burn can cause damage to vital organs such as the heart, liver, or kidneys. Even after healing from an initial exposure, victims suffer from long-lasting health problems, such as birth defects and neurological damage.

While the use of white phosphorus is not a war crime in itself, and is justified by the US and Israel on the basis it can obscure troop movements or illuminate areas, its use in civilian areas however, even if not directed at the civilian population, is banned under the Geneva Convention on Certain Conventional Weapons.