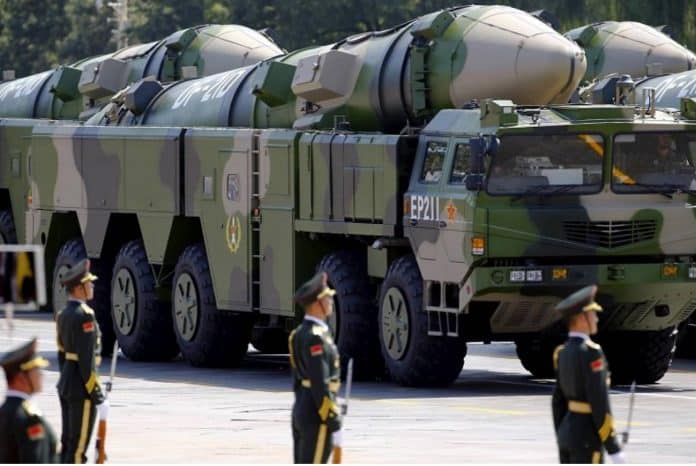 Russia’s Prime Minister Dimitry Medvedev recently declared that the latest round of US sanctions to be imposed on Russia constituted “economic warfare” and that Russia would respond “economically, politically, or in any other way, if required.”  One is tempted to ask: why has it taken so long?

Russia has been the subject of what Andrew Korybko calls “hybrid warfare” for decades. The only post World War 2 period when there was a lessening of the attacks was during the Yeltsin years in the 1990s. That period, when Russia’s economy was pillaged, was even more catastrophic for Russia than the sanctions and relentless negative propaganda that has ensued ever since.

The hybrid warfare, of which the sanctions are only a part, are a substitute for actual hot war which the neocon elements in successive American administrations have never taken off their agenda. That also is not a recent phenomenon.

Operation Unthinkable was a British plan conceived by the long time anti-Russian Prime Minister Winston Churchill to continue the war after the defeat of Germany in 1945 by invading Russia. The plan even included incorporating troops from the defeated German forces.

Churchill’s current equivalent is  Theresa May. Her antipathy to Russia is most obviously reflected in the increasingly bizarre allegations and demands made upon the Russian government arising out of the attacks upon Russian agent Sergei Skripal and his daughter Yulia.

Not only is the British government’s version utterly at odds with logic and known scientific facts, the British government is prepared to cast to one side its obligations under for example, the Chemical Weapons Treaty, the Consular Convention, and even fundamental principles of its much vaunted “rules based legal order” such as onus of proof, an evidential basis to one’s allegations, and the right of Yulia Skripal to return home to Russia, something she has publicly stated is her wish.

Allegations against Russia allegedly “interfering” in the 2016 United States presidential election (a particularly ironic claim), “invading Ukraine,” “annexing Crimea” being “aggressive” towards the Baltic States and a host of other evidence free allegations have some common threads apart from their manifest falsity.

They all represent a form of hybrid warfare, being waged (a) because actual warfare with Russia (and China) is, in the words of a recent Rand report “unthinkable;” and (b) because the previously dominant geopolitical role played by the UK and more recently by the US are rapidly being replaced by a vastly different multipolar world, of which Russia and China are two central components.

It is worth spelling out in a little detail exactly why the direct “hot war” option is unthinkable. First, there is the rapid and largely unheralded advance in sophisticated Chinese missile technology. This ignorance is personified by a senior Australian defence official responding to US admiral Harry Harris’ comment about how much the Americans appreciated their use of Darwin in Northern Australia as a base, saying that “it had the advantage of being out of the range of Chinese missiles.”

In fact, that is far from the case.Two of China’s missiles are worth special mention; both are members of the Dong Feng (“East Wind”) class, namely, the DF 41 and the DF 21D. The DF 41 has a range of 14,000 km (the distance from Beijing to Canberra is 9000 km) and has up to 10 independently targetable nuclear warheads. Its top speed is Mach 25, thereby reaching any Australian target from anywhere in China in less than half an hour.

No country, with the possible exception of Russia with its S500 anti-missile defence system, has any capability of stopping such an attack by this missile. The only “defence” is the threat of retaliation, and Australia for example, relies upon the United States for that purpose. It is only one of the delusional pillars upon which western ‘defence’ hinges.

The other member of the Dong Feng family worth noting in this context is the DF 21D. This anti-ship missile has a speed of Mach 10and a range of 1500 km. Its technical capabilities make it also invulnerable to defence measures. It is a “carrier killer” which means that US power projection, manifest in its aircraft carriers and their aeroplanes, are incapable of operating within range of the Chinese mainland.

On 1 March 2018 Russian President Putin, in an address to the Russian Federal Assembly, disclosed the existence of a number of new Russian missile systems, even more devastating than the Chinese ones referred to above. These new systems announced by Putin include a nuclear powered cruise missile of unlimited range; an unmanned submersible missile with an intercontinental range, operating at high speed and at great depth; a Mach 10 hypersonic missile with a 2000 km range (the Kinzhal); and a Mach 20 strategic missile (Avangard).

That these (and the Chinese) weapons are a military game changer is beyond the obvious. The whole of America’s strategic military posture has been rendered obsolete. The head of the United States’ strategic command General John Hyten admitted that “the United States doesn’t have any defence that could deny the employment of such a weapon (the Kinzhal) against us.”

Mike Griffin, United States Under Secretary of Defence for Research made a similar admission to the US Senate armed services committee, speaking in his case of the Chinese hypersonic delivery systems.

This failure to grasp the significance of the new realities has not stopped them from pursuing policies to counter those emerging trends. The non-stop demonizing propaganda against Russia; the latest sanctions against Russia and Iran; the extraordinary threats against their supposed allies through third party sanctions; and the escalating tariff war against China have little or nothing to do with their ostensible claims of Russian or Chinese “assertiveness” or “aggression.”

They do however, have everything to do with trying to sabotage the inexorable rise of China. In the face of their now exposed military weakness this takes the form of threatening friend and foe alike. As William Engdahl points out, another target is undermining the China 2025 program, one effect of which will be to destroy what remains of the US’s previously dominant role in technology.

The Chinese and Russian leadership both recognise the threat, not only to their own development but also to the peace of the world. This is a principal reason why their relationship has moved to that of a strategic partnership.

As Andrei Martyanov so aptly put it, the “world cannot afford any more a pretentious, self aggrandizing and hollow bully who knows not what it does and threatens the world’s stability and peace.”

The new generation of Russian and Chinese weapons technologies have created an opportunity to force the Americans into changing their geopolitical posture. The latest sanctions, threats and continued hybrid warfare suggest however that the lesson has not been fully absorbed. For all our sakes it must be fervently hoped that the lesson will be learned before further irreparable damage is done.