Henry Makow has a Ph.D. in English Literature from the University of Toronto and is the author of the best-selling book Cruel Hoax: Feminism & the New World Order. Makow grew up in a Jewish family.

Feminism is a subversive ideology, and you can easily prove this point by having a dialogue with any flaming feminist on vitally important issues. Last February, we published an article entitled, “Cabalists Poisoned the Well of Love.” Just two weeks ago, an irate reader by the name of Victoria Bazhanov wrote to me in order to “express disagreement” with my “unjustified and grotesque attack on Ali Raisman and her dignity.” She writes,

“You feign a grotesquely insincere ‘concern’ for Ms. Raisman’s soul, by lecturing for her daring to attack what you and your kind consider ‘modesty’ and what passes for it. Basically prior to her posing for Sports Illustrated, you would not give a hoot about Ms. Raisman, OR the abuse she endured.

“The first question men like you have to be asked is this: where exactly were men like yourselves, when Raisman was being abused? The answer is that men in general had failed women on many fronts, specifically by failing to protect them from the worst excesses that the so-called ‘manhood’ has to offer.”

To make a long story short, I replied to Bazhanov that it makes no sense for Raisman to posit claims such as “Women do not have to be modest to be respected—live for you! Everyone should feel comfortable expressing themselves however makes them happy” and then condemn men for following this premise to its logical conclusions. In other words, if Raisman is right, then men should also have to right to “express themselves however makes them happy.” If the view was only available to women and not to men, then it just shows that Raisman is under the spell of an ideology.

Bazhanov responded by saying: “The argument you presented is incredibly weak, morally bankrupt and is completely prejudiced towards both Ms. Raisman and women in general. So to answer your abominable question, NO, Mr. Nassar was NOT merely ‘expressing himself’! He was committing a crime by molesting Ms. Raisman and other gymnasts! For you to even ask this question and drew such parallels, is nothing but diabolical. It does open the window into the perverted and sick mindset that millions of men in this country and around the world adopt towards women.”

I just couldn’t hold my laughter here because a few moments later the same Bazhanov started talking about “so-called moral law, invented by you know who and for you know who.” She is concerned that my views are “morally bankrupt,” but she could never tell me exactly what the moral law actually says because for her there seems to be no objective moral law.

I even sent Bazhanov a number of articles where it is reported that men have also been raped, humiliated and tortured by women. She was completely silent on that issue. She wrote back and said:

Well, who are you to condemn me, Ms. Bazhanov? Am I free to express myself as a human being? Should I have to zip my lips and suppress my inner thoughts? If Bazhanov’s premise is correct, then the men who have been sexually abused by women should hate all women at all times and places. Isn’t that a ridiculous argument?

In any event, perhaps one reason why Bazhanov could not see that her premises are fundamentally incoherent is because she is imbibing a system which itself is fundamentally at odds with the nature of reality. Some of the founders of feminism were indeed revolutionaries. One of those people was none other than Betty Friedan, who was indeed a commie. Henry Makow has a lot to say about that. 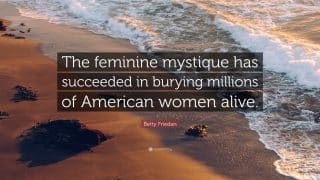 Henry Makow: Betty Friedan, the “founder of modern feminism” pretended to be a typical 1950’s American housewife who had a “revelation” that women like her were exploited and should seek independence and self-fulfillment in career.

What Friedan (nee: Betty Naomi Goldstein) didn’t say is that she had been a Communist propagandist since her student days at Smith College (1938-1942) and that the destruction of the family has always been central to the Communist Jewish plan for world tyranny.

Friedan dropped out of grad school to become a reporter for a Communist news service. From 1946 -1952 she worked for the newspaper of the United Electrical, Radio and Machine Workers of America, (UE) “the largest Communist-led institution of any kind in the United States.” In 1947, Congress targeted the UE as a Communist front and its membership began a steady decline.

Daniel Horowitz, a History Professor at Smith with impeccable Liberal and Feminist credentials documents all this in his book, Betty Friedan and the Making of the Feminine Mystique: The American Left, the Cold War and Modern Feminism (University of Massachusetts Press 1999). Horowitz cites a union member who described how a Communist minority “seized control of the UE national office, the executive board, the paid-staff, the union newspaper and some district councils and locals.”

Betty Frieden doesn’t want anyone to know her radical antecedents. Throughout her career, she said she had no interest in the condition of women before her “revelation.” She refused to cooperate with Professor Horowitz and accused him of “Red-baiting.”

Why? Because her book “The Feminist Mystique” (1963) would not have sold over five million copies if her subversive background were known.

Communists operate by subterfuge — pretending to be just like us. This is the “Popular Front” strategy that consisted of starting idealistic movements in order to ensnare well-meaning people, usually students, workers, women, artists or intellectuals. The membership was ignorant that their organization was funded and controlled by people with a totally different agenda. This is also the principle behind freemasonry, Zionism and Communism itself. Essentially the adherents are dupes.

Willi Munzenberg, an early confidante of Lenin, organized the Popular Fronts in the 1920’s and 1930’s and referred to them as “my innocents clubs”. He pioneered the protest march, the demonstration, the radical bookstore and publication, the arts festival, and the recruitment of celebrities (“fellow travellers.”)

In the words of historian Stephen Koch, Munzenberg, left, “was amazingly successful at mobilizing the intelligentsia of the West on behalf of a moralistic set of political attitudes responsive to Soviet needs. In the process, he organized and defined the ‘enlightened’ moral agenda of his era.” (Double Lives: Spies and Writers in the Secret Soviet War of Ideas Against the West, New York, 1994, p.14.)

In a 1989 interview, Babette Gross, the wife of Willy Munstenberg, described the Popular Front modus operandi:

“You do not endorse Stalin. You do not call yourself a Communist. You do not call upon people to support the Soviets. Never. You claim to be an independent minded idealist. You don’t really understand politics but you claim the little guy is getting a lousy break.” (Koch, p. 220)

Friedan observed this principle when she helped start second-wave Feminism, which is a classic “Popular Front.” The very name, “the woman’s movement” and claim to be for “equality” are but a smoke screen for a diabolical crusade to destroy the institution of the family. For example, feminist professor Alison Jagger calls the nuclear family “a cornerstone of women’s oppression: it enforces women’s dependence on men, it enforces heterosexuality and it imposes the prevailing masculine and feminine character structures on the next generation.” (“Feminist Politics and Human Nature,” 1988)

The “Congress of American Women,” a Popular Front organization founded in 1946 reached a membership of 250,000. It was disbanded in 1950 after being required to register as a “foreign agent” by the U.S. Government. Feminist historian Ruth Rosen writes that the “CAW’s agenda prefigured much of the modern women’s movement that emerged in the sixties.” (Ruth Rosen, The World Split Open: How the Modern Women’s Movement Changed America,New York, 2000, p.28.)

The FBI kept tabs on the “Women’s movement” but found no direct connection with Soviet subversion. Ruth Rosen, herself a veteran, finds this ironic.

“Ironically, the FBI searched for signs of subversion in the Women’s movement but couldn’t recognize what was truly dangerous. While they looked for Communists and bombs, the women’s movement was shattering traditional ideas about work, customs, education, sexuality, and the family. Ultimately the movement would prove far more revolutionary than the FBI could ever imagine. Feminism would leave a legacy of disorientation, debate and disagreement, create cultural chaos and social change for millions of men and women, and, in the process, help ignite the culture wars that would polarize American society. But at the time these ideas were not what the FBI considered subversive.” (260)

By attacking the social fabric, feminists inflicted more damage to Western society than Communists ever dreamed. Domestic violence hysteria has driven a wedge between men and women. Women have been psychologically neutered. They are encouraged to pursue sex and career not family. The US birth rate has plummeted from 3.9 children per woman in 1960 to 1.9 today, the lowest level in history. [Replacement is 2.1] The marriage rate has declined by 1/3 while the divorce rate has doubled since 1960. Forty per cent of all first-born US children are conceived or born out of wedlock.

The feminist Trojan Horse has proven extremely effective. The question is why? How could a sick subversive philosophy that openly pits women against men have been able to succeed?

The disconcerting answer is that monopoly capitalists are behind both Communism and Feminism and use them to undermine the political and cultural institutions of Western Civilization.

Rockefeller-Rothschild cartels own most of the world and naturally assume they should control it too. They own most of our politicians, media and educators. Their goal is a “new world order” (a.k.a. “globalization”) in which they remake mankind to fit their nefarious ends.