[ Editor’s Note: My, my…Mr. Erdogan had Qatar up his sleeve… Imagine that! Fifteen billion is nothing to sneeze at, and it is way more than Saudi Arabia ever did for Egypt during its financial crunches, usually putting money on deposit in the national bank, which could be withdrawn.

Qatar seems to be repaying the favor when Turkey helped it break the Saudi-coalition blockade on Qatar, even sending troops there. We will see if Trump sanctions Qatar, but no one is holding their breath on that one.

We will have to see if Qatar might do the same for Pakistan, also in need of capital to revive the country. Gordon’s Imran Kahn and the Silk Road piece is now number one on NEO, having built an audience since the 9th, but where back here in the states Google has its foot on the VT-reads brake pedal.

We are used to the ups and downs, but soldier on regardless. These are busy times. Mr. Trump has given us that, if nothing else. Where it will eventually end is anyone’s guess, but I fear it will get worse before it gets better… Jim W. Dean ]

“The Turkish President and Emir of Qatar met today [Wednesday[ in the presidential complex in Ankara. They have exchanged views on bilateral relations and regional issues, Al-Thani said that Qatar intends to directly invest $15 billion in Turkey,” said a press release after the meeting. 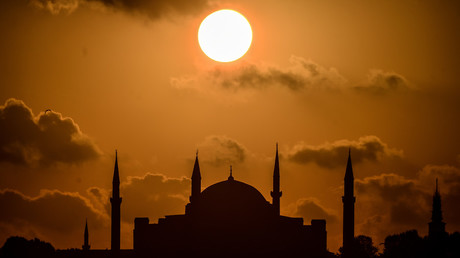 The Turkish lira firmed to 5.8699, from 6.04 to the US dollar after the news. The record low level of 7.2 against the greenback happened on Monday.

The Turkish officials did not provide any further information on the nature of the investments, according to AP. Erdogan’s office said the pledge was made by Qatar’s head, Al Thani.

The investment will be channeled into Turkish financial markets and banks, a government source told Reuters.

The Turkish economy has recently been hit by a record depreciation in the national currency lira. On Friday, US President Donald Trump doubled tariffs on aluminium and steel from Turkey in response to the detention of a US citizen. American pastor Andrew Brunson is being held on terrorism charges in Turkey, facing up to 35 years in prison for his alleged role in a failed coup in 2016.

In response, Erdogan announced boycott of US electronic devices, including Apple iPhones. Turkey has also hiked tariffs on US goods such as tobacco, alcohol, cars, cosmetics and others.