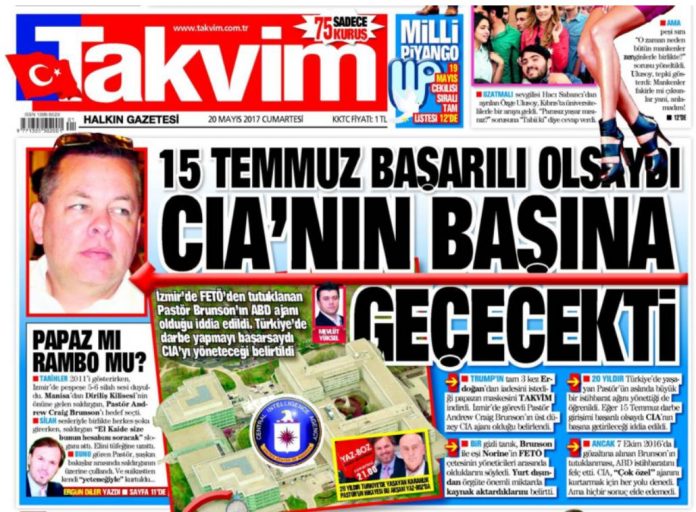 Introduction: The faceoff between Trump and Erdogan has reached new dimensions.  VT has gained access to the case file against pastor Andrew Craig Brunson, who is under house arrest in Turkey.

There is what appears to be a preponderance of evidence that Brunson is a CIA/Gladio “insert” tasked with taking down Turkey’s government.  His file, if it is not faked, and that is always a possibility, shows Brunson to have worked as a CIA operative in Iraq, looting gold, oil and art treasures worth billions.

Turkey believes Brunson is running PKK Kurdish terror cells in Turkey in conjunction with the CIA.  Our sources peg him as an Israeli agent and a good one.  Brunson is to be assassinated and it is to be blamed on Erdogan.  Millions have already been spent to put political assets inside Turkey in place to rise up against Erdogan for this yet to be perpetrated killing on his part.

After all, the US coup against Erdogan in 2016 failed, this is just a redux. 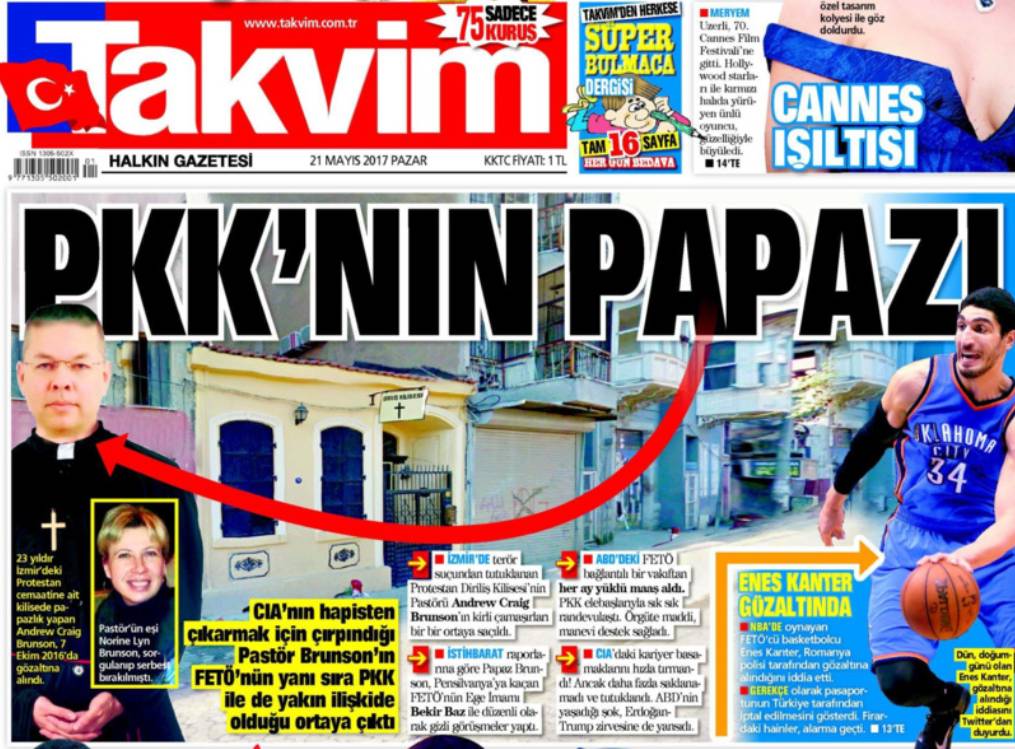 Our experience indicates that Brunson may well have been a major intelligence asset and that Trump had no idea whatsoever.  He was led into this, jumped to conclusions and has now made a fool of himself (again) because he has surrounded himself with people afraid to tell him anything.

The information below, two English translations (to avoid mistakes) and one in Arabic, are highest level intel from direct sources in Turkey and Italy’s counter-terrorism directorates, Carabinieri.

In 2016, I flew to Rome with VT representatives and met with the Carabinieri to discuss an intelligence exchange program.  VT agreed to supply counter-terrorism leads for Europe and the Balkans to the Italian government in exchange for protection for key assets in Italy.

VT/Keshe personnel had been attacked by terrorists leaving one dead and another in a coma.  That individual was the daughter of an Italian police official.  This is all the background allowed.

Similarly, VT has forged a direct relationship with Turkey’s Foreign Ministry and President Erdogan’s advisory staff.  As journalists, of course, this was done to improve the quality of our access to allow us to report exclusively on issues censored in other media.

DESI Secretary General: President Erdogan has a range of options and will fiercely retaliate

European Department for Security and Information Secretary General Ambassador Dr. Haitham Abu Said Told VT that Turkey has an immense data and Intel in its pocket when it comes to responding to the unjustified US campaign, especially vis-à-vis the imposed economic embargo that entails political, economic and social perils.

The US administration is currently demanding the release of Rev. “Brunson “, after the Turkish Intelligence revealed his true identity as a senior intelligence officer and a mole.

Brunson served as an intelligence officer in various stations, especially in Iraq, where he seized, with his cell gangsters, a large amount of gold during the Iraqi invasion, under the pretext of the Iraqi nuclear weapons.

DESI Intel indicates that the members of the intelligence cell headed by Rev. “Brunson” entered Turkey with faked professions and different nationalities to destabilize the country. This is confirmed and the sun cannot be shrouded by a sieve.

Europeans disgruntled at US campaign

In a related context, Ambassador Abu Said affirms that the European Union is disgruntled at the US campaign against Turkey due to several reason. The deterioration of the Turkish currency and economic siege will make Ankara unpredictable in its decisions, especially when it comes to the issue of countering terrorism as the west desires.

Europeans fear that the US may take uncalculated adventure that would lead again to the spread-out of terrorism as political prospects are not sunny. DESI Secretary-General called on both sides to resort to wisdom and self-restraint before things would slip away and consequences become earth-shattering.

EX US  State Department advisor Dr. Osama Ismail told VT that President Donald Trump is planning to exasperate the Turkish crisis by depreciating the lira to its lowest levels, and then, coerce the Turkish government into borrowing loans from the International Monetary Bank.

Dr. Ismail as a politician and an economist sees that Trump final goal is to topple President Erdogan after creating severe economic and social turbulences in the country.

VT sources in Moscow say that Russians and Turks have agreed to move Al Nusra armed elements from Edlib to Qandil Mountains in Kurdistan.  Positioning Al Nusra in Qandil Mountains is a smart choice from Erdogan, because both sides will eventually have a face-off that would lead to a long raging war, and Erdogan will get rid of Al Nusra, and his main staunch foe the PKK.

Russia is setting the table, Erdogan deals the cards, and Trump swaggers. The show must go on.

In the context of events and regional developments, especially what is happening on the Syrian and Turkish arena, the Secretary General of the European Department for Security and Information Ambassador Dr. Haitham Abu Said said that Turkey has great prospects and data in its response to the American campaign, especially in the economic embargo imposed by it comes in the context of fear for the fate of the ” Bronson “, after it was discovered after careful monitoring and careful monitoring by the Turkish intelligence that he is not a priest but an intelligence officer working in several places, especially in Iraq.

To find that the officer who put his hand with elements of his on a large amount of Iraqi gold during the invasion of them in the recent war under the pretext of the Iraqi nuclear weapons.

The information also indicated that the members of the intelligence cells headed by Rev. “Bronson” entered Turkey with different professions and different nationalities.

In a related context, Ambassador Abu Said said that the European Union is not satisfied with the US campaign against Turkey due to several reasons, including that the deterioration of the Turkish currency and economic siege will make Ankara to several data to solve the political and economic solutions, and will put the calculations of Ankara elsewhere and therefore may fail For the control of many things and does not cooperate in important and serious issues, especially the subject of terrorism and fight it as the West wants if America has a new adventure in this context.

The Secretary-General concluded by pointing out that war intimidation was out of the question on both sides and called for arbitration of wisdom on this issue. It was said that things would slip away and that the consequences would be ignored.