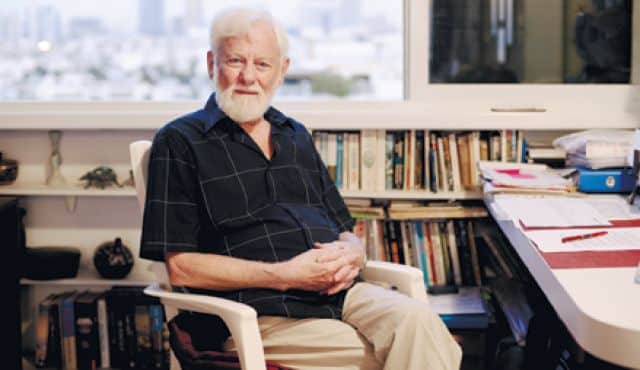 [ Editor’s Note: We had been expecting the worst for Uri, as strokes for people in their 90’s are usually the end of the road. He went quickly after a long and full life, not a bad way to go.

His enemies have already started attacking his corpse. Wikipedia, usually quick to add obits to profiles, seems to be waiting for instructions.

But Uri can fight on after his death, something we writers are blessed to have the opportunity to do. His body of work is huge, and cannot be erased. He was not a Tweeter, and the jabs he will get now will bounce off his legacy like ping pong balls.

In 2010, Avnery was attacked after a peace rally in Tel Aviv, where he had criticized the Israeli military action against the Free Gaza convoy.

We had our issues with him, primarily his refusal to even entertain the prospect that if the post WWII Jews had not crashed into Palestine, then all the carnage that ensued would probably never happened.

The case has already been made that Jews who did not go to Israel did just fine. Most did not want to go there anyway, with the US being their top choice.

During the post-war Allied occupation, US military intelligence compiled a body of reports about radical Zionists, all Communists, who were impressing Jews in the displacement camps into going to Israel, as they ran most of the camp’s administration centers and knew everybody’s occupation.

If you had a needed skill, like an aircraft mechanic, they just came and got you and smuggled you out. Mass media never touched any of this, but the US general (Eisenhower’s logistics commander for D-Day) who was over all the camps, covered it in detail in his book.

Gush Shalom grieves and mourns the passing of its founder, Uri Avnery. Until the last moment he continued on the way he had traveled all his life.

On Saturday, two weeks ago, he collapsed in his home when he was about to leave for the Rabin Square and attend a demonstration against the “Nation State Law”, a few hours after he wrote a sharp article against that law.

Avnery devoted himself entirely to the struggle to achieve peace between the state of Israel and the Palestinian people in their independent state, as well as between Israel and the Arab and Muslim World.

He did not get to the end of the road, did not live to see peace come about. We – the members of Gush Shalom as well as very many other people who were directly and indirectly influenced by him – will continue his mission and honor his memory.

On the day of the passing of Uri Avnery, the most right wing government in the history of Israel is engaged in negotiations with Hamas. Ironically, the same kind of demagogic accusations which were hurled at Uri Avnery throughout his life are now made against Defense Minister Avigdor Lieberman.

In the history of the State of Israel, Uri Avnery will be inscribed as a far-seeing visionary who pointed to a way which others failed to see. It is the fate and future of the State of Israel to reach peace with its neighbors and to integrate into the geographical and political region in which it is located. Avnery’s greatest opponents will ultimately have to follow in his footsteps – because the State of Israel has no other real choice.