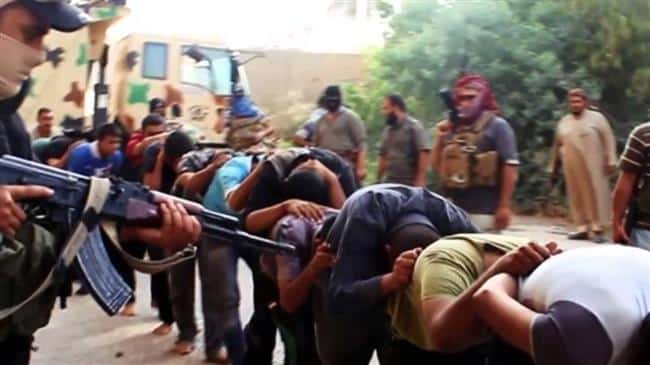 [ Editor’s Note: I love the old saying of, “Vengeance is best served cold”. I regret that Iraq has not invited me to the executions, but I am none the less thrilled that these mass murderers will be getting their due at the end of the hangman’s noose.

Rounding up and executing all of these unarmed cadets in the early part of the ISIS take over of Mosul was an act of terror to inspire what we now know were way too many Iraqi “paycheck soldiers”, who threw off their uniforms and ran.

I used the photo of the uniform-strewn road in a number of articles over the years. Yes, a part of it was prompted by their personal cowardice, but with a big dose of corruption thrown in.

Iraqi officers would game the military payroll by being allotted a personal security team of twelve soldiers. He would actually use four of them and make a deal with the others to stay up home and split their pay with the officer 50/50.

This kind of padding was widespread, and rots a military force to the core. We can see in hindsight what easy pickings it was for 5000 hard-core ISIS fighters to almost take over Iraq. I heard at one point that Iraq had executed 65 officers for their role in “letting ISIS come into Iraq”, or not doing their duty to fight them.

I am grateful that these guys were caught and can join the corrupt Iraqi officers who assisted them. And yes, most of them were Sunnis, allowed to hold military commands, which they abused by betraying their country for their tribe … Jim W. Dean ]

The Iraqi Judiciary has upheld death sentences against more than a dozen convicts involved in a June 2014 massacre by Daesh Takfiri terrorists at an air force camp in the country’s north-central province of Salahuddin.

Head of the Committee for the Commemoration of the carnage, Moin al-Kazemi, said in a statement that Iraqi judicial officials passed the ruling on 14 convicts on Sunday, urging the officials to carry out the sentences as soon as possible.

On June 12, 2014, Daesh terrorists killed around 1,700 Iraqi air force cadets after kidnapping them from Camp Speicher, a former US base. There were reportedly around 4,000 unarmed cadets in the camp when it came under attack by Daesh militants.

Following the abductions, the attackers took the victims to the complex of presidential palaces and killed them. The terrorists also threw some of the bodies into a river. The massacre was filmed by Daesh and broadcast on social media.

Tikrit was recaptured from Daesh in March 2015. During clean-up operations in the northern part of the city, Iraqi forces found the location of the 2014 carnage.

On June 30, Iraqi Prime Minister Haider al-Abadi, who is also the commander-in-chief of Iraqi forces, pledged to hunt down Daesh militants across Iraq after a series of attacks and abductions carried out by the terrorist group.

“We will chase the remaining cells of terrorism in their hideouts and we will kill them, we will chase them everywhere, in the mountains and the desert,” Abadi said.

Abadi declared the end of military operations against Daesh in the Arab country on December 9, 2017.

On July 10 that year, the Iraqi prime minister had formally declared victory over Daesh extremists in Mosul, which served as the terrorists’ main urban stronghold in the conflict-ridden Arab country.

In the run-up to Mosul’s liberation, Iraqi army soldiers and volunteer Hashd al-Sha’abi fighters had made sweeping gains against Daesh.

Iraqi forces took control of eastern Mosul in January 2017 after 100 days of fighting, and launched the battle in the west on February 19 last year. Daesh began a terror campaign in Iraq in 2014, overrunning vast swathes in lightning attacks.