Bernard Lewis, one of the leading proponents of the Iraq war, passed away just last May. After down-playing the significance of the Armenian Genocide, Lewis declared,

“There is no evidence of a decision to massacre. On the contrary, there is considerable evidence of attempts to prevent it, which were not very successful. Yes, there were tremendous massacres, the numbers are very uncertain, but a million may well be likely…The issue is not whether the massacres happened or not, but rather if these massacres were as a result of a deliberate preconceived decision of the Turkish government…there is no evidence for such a decision.”[1]

Lewis spoke about the Armenian Genocide with Haaretz in 1998. He said then:

“The deniers of Holocaust have a purpose: to prolong Nazism and to return to Nazi legislation. Nobody wants the ‘Young Turks’ back, and nobody wants to have back the Ottoman Law. What do the Armenians want?

“The Armenians want to benefit from both worlds. On the one hand, they speak with pride of their struggle against the Ottoman despotism, while on the other hand, they compare their tragedy to the Jewish Holocaust. 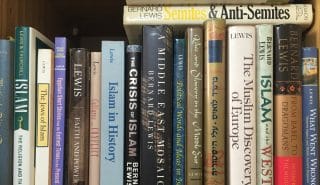 “I do not accept this. I do not say that the Armenians did not suffer terribly. But I find enough cause for me to contain their attempts to use the Armenian massacres to diminish the worth of the Jewish Holocaust and to relate to it instead as an ethnic dispute.”[2]

Since the Armenian genocide was largely orchestrated by Dönmeh (a group of crypto-Sabbateans in the Ottoman Empire),[3] Lewis had to find a way to manipulate the evidence to fit his own ideology. He has no other choice. He has to give the impression that what happened in Nazi Germany was unique. In fact, the Holocaust establishment has been perpetuating exactly that. Yet by saying weird things like this, Lewis he is playing fast and loose with the facts as a historian and as a critic of Islam.

At the end of 2011, a debate was scheduled so that the Israeli government could decide whether to acknowledge that the Armenian massacre was genocide. Netanyahu, however, “requested the debate be canceled because ‘it would be better for the country if this did not take place.’”[4]

Hypocritically, while Israel loudly calls for the world to recognize the Nazi holocaust, the state of Israel for years has refused to accept the Armenian Genocide,[5] and didn’t even start the progress of acknowledging it until 2011.[6]

What is even more heartbreaking is that while many Jewish organizations make sure that Nazi perpetrators get convicted and Nazi survivors get the world’s attention, Armenian Genocide survivors have gotten little time in the public eye.[7] 72-year-old Bishop Williamson got fined for “Holocaust denial,”[8] yet Bernard Lewis got tenured at prestigious places like Princeton for saying that the Armenian genocide never happened.

Monika Schaefer is in prison in Germany simply because she did a video questioning the political power of the Holocaust establishment. But Lewis died in peace because questioning the Armenian genocide is academic freedom!