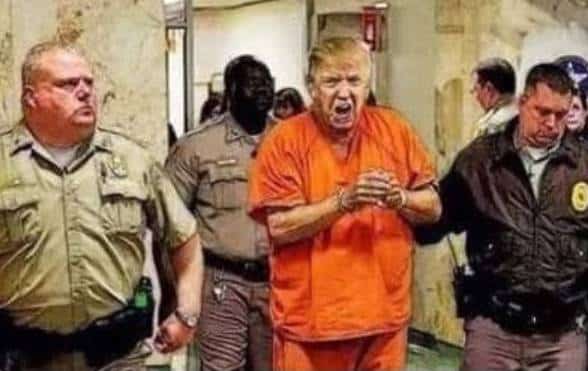 We searched for reasons to take the claims from The Hill and Politico seriously, claims that a president could violate law and not be arrested. In that the Constitution is the only law of the land in this instance, we sought solace in that document and its provision that give public office holders protection from arrest.

Oh my goodness, it seems the founding fathers made NO effort to protect a president whatsoever and that claims otherwise are total and absolute bullshit fed the public by the fake press.  Read and weep.

The Senators and Representatives…shall in all Cases, except Treason, Felony, and Breach of the Peace, be privileged from Arrest during their Attendance at the Session of their respective Houses, and in going to and returning from the same….

Civil arrest is the physical detainment of a person, by lawful authority, to answer a civil demand against him. At the time the Constitution was adopted, civil arrests were common. Long v. Ansell (1934). The Framers likely feared this tool could be misused to interfere with the legislative process. Civil arrest is rarely, if ever, practiced, so this clause is virtually obsolete and has little application today.

The Supreme Court interpreted the language “in all Cases, except Treason, Felony, and Breach of the Peace” to encompass all crimes. Williamson v. United States(1908). Tracing the origins of the clause to parliamentary privilege, the Court found this identical language was used to qualify Parliament’s privilege from arrest so that the members of Parliament were not immune from criminal prosecution. The Court concluded that the Framers’ use of the identical phrase, without any explanation, indicated that Congress’s privilege was to have the same limitation regarding criminal actions as did the parliamentary privilege from which the language was borrowed. The clause, therefore, does not provide Congress with any immunity from criminal prosecution.

The Supreme Court, applying the Framers’ intent, later declared that the clause also did not provide any privilege from civil process. Long v. Ansell. Hence, civil litigants can compel Members of Congress to appear in a court of proper jurisdiction to defend against civil actions. Furthermore, the Court has so narrowly interpreted the clause that Members of Congress may even be compelled by subpoena to testify in criminal and civil actions while Congress is in session.