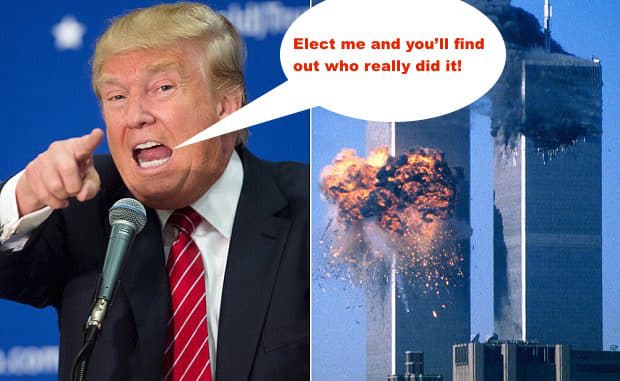 Now that Trump is on the ropes, with crony after crony “flipping” and turning state’s evidence, will he use 9/11 truth as his “nuclear option” to blow up the whole Deep State?

First half hour: Robert David Steele recently published “Memorandums for the President on 9/11“—a collection of succinct arguments from 27 9/11 experts urging the president to re-open 9/11 and fulfill his campaign promise: “Elect me and you’ll find out who really knocked down the World Trade Center.” In this interview, Steele—a former CIA Clandestine Services Officer who later founded the Open Source Intelligence movement—argues that Trump can, should, and quite possibly will “make America great again” by revealing the truth about the crime of the century. Steele has channels to Trump and argues that Trump very likely will either see these memos, or at least get a summary.

Second half hour: Whistleblower Tom Scott Gordon‘s memo to Trump begins: “As early as 1989 it was known to the owners of WTC that the buildings must be brought down before 2007 because the interior steel and exterior aluminum were both compromised and the buildings would be at risk of collapsing — the cost to dismantle them was estimated to be $2B in 2010 dollars or more, inclusive of asbestos remediation.” Gordon knows these things not just from research, but from “direct personal participation as a member of the team that fully documented the need to condemn and dismantle the WTC buildings.”

Finally, author and NYC congressional candidate Sander Hicks discusses his memo to the President: “9/11 Truth Can Unite the Public Against the Deep State.”