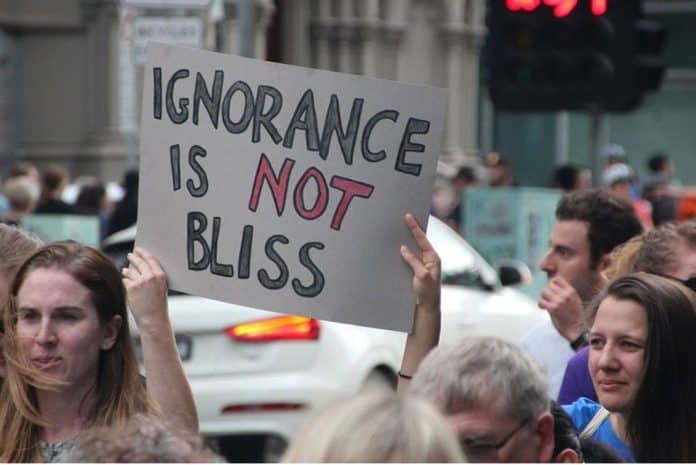 People around the world are convinced that the United States is a nation run by criminal psychopaths and morons. A greater fear is that world leaders mistakenly assume that their American counterparts who do and say insane things continually are, in actuality, normal people operating inside some “master plan.”

Then, when time and time again, no such plan materializes, and it is demonstrated that America has blundered into a diplomatic, economic or military morass, for some unknown reason, a “reset” occurs, and the wrong assumptions are again made.

At every level, humanity errs in assuming that those in command are there because of talent and worth or that, because America is so wealthy and powerful, that its people are such because of moral and intellectual superiority.

Blind acceptance of exceptionalism is, in itself, a dangerous disease.

If you ask an average American what their IQ is, they are quick to answer. Invariably they will say, “140” or more. Yet, when you look at American society, at America’s culture, the idea of a nation of Mensa types is unrealistic. Americans aren’t much more stupid than other people, just much more dangerous.

Truth is, the average American has an IQ of around 96. It used to be 100, the number established as a “mean.” About 40% of Americans run between 60 and 85, enough to function at basic levels but with intelligence low enough to impair higher functions such as judgment and critical reasoning.

This is where the real problem is, of that 40%, a significant number graduate from universities and of those who come from higher socio-economic backgrounds, like those with inherited money, they get not just Ivy League degrees, but often make it through “diploma mill” fake graduate programs at the Wharton School of Business, Yale and Harvard.

In Britain, of course, “idiots,” and the quotes are out of kindness because “idiot” is a real term with a real definition and applies quite nicely, go to Eaton, then Oxford or Cambridge.

Where it comes to play in America is the manner those of limited capability are channeled into military command, into government, into teaching positions even in universities and into the White House itself.

Thus, real talent, “brilliance” as it were, is replaced by “cleverness” and even various forms of moral deficiency on the spectrum of social psychopathy.

When the world watches America, “on the bus to ‘Crazy-Town,’” it is always assumed that the worst, even if that “worst” is true, must be denied, rationalized away. Even in America itself, those of talent, out of a need to simply turn away from an unpleasant truth, too often look for any sign that psychopathic morons in government and the military or, worse still, controlling social media giants and tech companies, are “normal.”

This form of denial, “normalizing” the abnormal, exalting the idiot, mistaking clownishness for hidden genius, very hidden genius, is in itself a disease, a weakness, a failing and a threat to the survival of the human species.

It is no secret that the world itself and certainly the United States is ruled by economic elites whose positions are entirely inherited, elites with a stranglehold on political and economic life. Their origins, the banking families of Europe’s Middle Ages or the “Robber Barons” of the 19th century, perhaps the shipping families that carried opium and slaves, those and more, have left America with an elite ruling class that has long demonstrated moral depravity.

Through social manipulation this group, that controlled the eugenics movement during the 20s and 30s, has learned that they don’t need to use selective breeding to create slaves, but that it can be done through the education system which they control through foundations and think tanks.

To an extent, it is demonstrable that the Nazi reign of terror was financed and engineered by America’s elites, the Bush, Harriman, Rockefeller, Farish and Walker families partnered with Hitler and IG Farben. Auschwitz was one of their efforts and what began as eugenics became mass murder under Hitler only to reappear as “Google” and “Facebook” decades later. In between, foundations rewrote history, recreated a “dumbed down” education system and society.

In American government, congress walled itself in with rules that stifled change and debate, gave all control of the few, committee heads from remote and backward districts who ruled America on behalf of ruling elites for generations.

Key to keeping it all working has been the reengineering of every institution to favor the “morally flexible” of limited intelligence, a nation of semi-literate legislators, doctors, judges, law enforcement officials, college professors, admirals and generals and even captains of industry.

The result has been 50 years of declining wages, lowered life expectancy despite scientific advances, a society at war with itself, radicalized, superstitious and easily controlled.

Fostering all of it is the general human weakness of denialism, the need to ignore seemingly unsurmountable challenges when simply “going along with the program” allows for survival and where “being part of the problem” can offer great rewards.

Behind it all is the fake narrative, an endless droning of jingoism and phony patriotism, of exceptionalism and behind that is always fear.

To an extent, technology itself is the enemy. A century ago, when America was a burgeoning industrial giant, teeming millions worked in factories. The hierarchy there wasn’t so much factory owners or thuggish supervisors, Ford Motor Company actually hired violent felons to oversee workers.

It took real talent, even brilliance, to design tools, create innovations, improve processes, all of which was done by real elites among the working classes. Whoever may have thought they were “in charge,” without tool and die makers nothing happened.

With all of that gone, CAD systems, robotics, a world of devices and “apps,” an America with fake universities giving out fake degrees, a military that passes out fake medals to fake heroes by the score who fight equally fake wars, whatever remained of a natural elite, an “offset” as it were, has disappeared.

By the mid-1970s, under the guise of creating opportunities for minorities, the bar was lowered, allowing the least talented to rise and the potentially threatening few of capability to be contained and stifled. This wasn’t by accident and had absolutely nothing to do with opportunity or equality.

It had everything to do with compliance and with building a society where moral questions would go unanswered, unasked and would eventually disappear.

The reality, a congress where an IQ of 70 is not unheard of, military academies where psychopathic behavior is promoted and those who exhibit the most deviant tendencies are “fast tracked” to command.

Journalism and its partner industry, “entertainment” is so much worse.

None of it was done by accident.

Gordon Duff is a Marine combat veteran of the Vietnam War that has worked on veterans and POW issues for decades and consulted with governments challenged by security issues. He’s a senior editor and chairman of the board of  Veterans Today, especially for the online magazine “New Eastern Outlook.”
https://journal-neo.org/2018/08/26/america-the-tyranny-of-the-stupid/