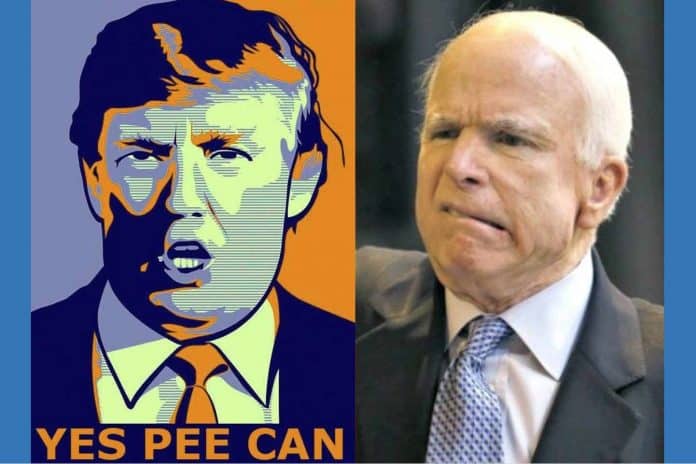 According to a new Trump–Russia dossier, President Trump has already hired a team of Russian prostitutes to urinate on the freshly-dug grave of Senator John McCain.

The new “Schpiel Dossier,” compiled during the past 24 hours by a high-level MI-6 source, includes decrypted transcripts of Trump’s latest conversations with Russian mob boss Semion Mogilevich. According to the report, Trump installed a special quantum-encrypted hotline to Mogilevich in the White House shortly after taking office. Unfortunately for Trump, Schpiel and his team, code named “Schroedinger’s Cat,” broke the code and have been listening in on Trump’s ultra-sensitive conversations with the Russian mobster since early 2017.

Last night’s transcripts include a conversation in which Trump demands that Mogilevich “send a bunch of hot chicks who really, really need to go to the bathroom” to the Naval Academy in Annapolis, Maryland next weekend so they can “sneak into the graveyard at night and provide water and fertilizer so (McCain) can push up some nice, healthy daisies.”

Schpiel also intercepted and decrypted a subsequent call from Mogilivech to Russian President Vladimir Putin. According to transcripts, both Russians agreed “that guy (Trump) is really F***ing weird.”

Melania Trump, who spends most of her time hiding from her husband and the press, in that order, and who can blame her, could not be reached for comment.

Poll: Which of the following best describes your reaction to President Trump’s decision to hire Russian prostitutes to urinate on John McCain’s grave? 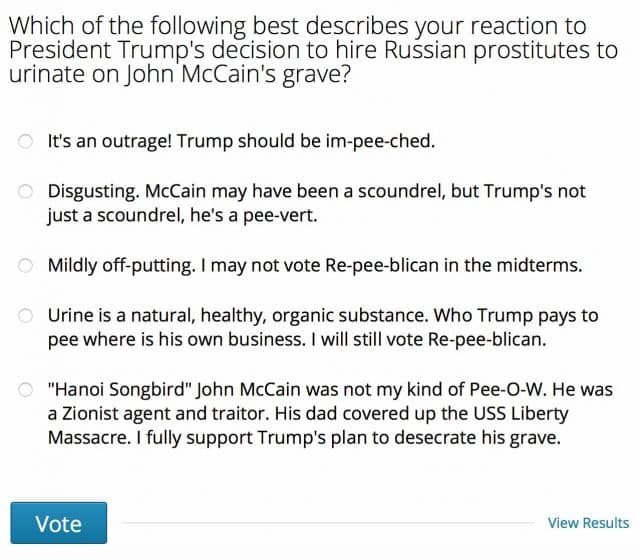